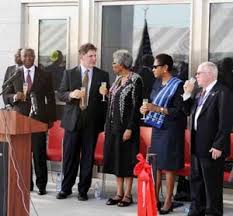 In an interview published in the Gabonese newspaper Gabon "La Loupe" the U.S. Ambassador to Gabon, Eric Benjaminson, finished killing his credibility, or the little of it that remained, by making fanciful statements that do not stand up to a kid level analysis.

1. In "La Loupe" the Ambassador said that: "Three or four weeks before her announced departure, Paulette Oyane Ondo gave an interview to La Lettre du Continent in Paris in which she mentioned three things about our program. First she said she was invited to receive an award from the State Department in the United States. Unfortunately, this was not true. The program was for the training of 35 or 37 African women so it was not only a program for Ms. Oyane. Secondly, she said that she was chosen because of her position in the Gabonese opposition. However, this statement was still wrong. We all know she is a lawyer and has been well trained, she is a particularly strong woman in politics in Gabon but for me, we do not care if she is for the opposition or the current regime. Third, the most serious problem is that she said that the U.S. government's decision to send her to the United States was made in the context of retaliation of Washington against the government of President Ali Bongo. '

The analysis of Le Gabon Enervant/Annoying Gabon: after reading this story told to "La Loupe" by Ambassador Benjaminson, nobody could ever accuse him of lacking imagination, because if the statements reported by this newspaper are actually out of Benjaminson’s mouth, it may be time to worry about the moral integrity of the representative of the country of Uncle Sam. Indeed, dear readers, we have recovered the article which the Ambassador attempts to reference, and the contents of this article, as you can see for yourself, has no resemblance to the hallucinations reported by Benjaminson in his interview. Reading the article of La Lettre du Continent proves that: a) this article is not an interview, b) the article does not even say that the information came from Paulette Oyane Ondo; c) that there is reason to wonder where Eric Benjaminson went to fetch the three counts on which he said to have based his decision to cancel the trip because they are not readable in the communication of la Lettre du Continent; unless of course (everything is possible, is not it?) it is the case that the U.S. Embassy in Gabon receives a special edition of La Lettre du Continent, the content of which is secret and forbidden to hillbillies like us, in which the famous interview is clearly reported. We almost have pity for Eric Benjaminson because we never would have thought that a U.S. Ambassador could fall lower than dirt, now moving in the excretions of Ali Bongo. We are pained to observe that Ambassador forced to desperately try to seal as it may, the falsehood gaps opened by him to begin with.

2. In "La Loupe" the Ambassador said that: "For the contents of the letter, it was a long letter well written. It was a little weird for me, because they wrote this letter to criticize me, then they asked me to send it to my bosses in Washington. Without saying anything, I accepted.... It was a little amusing! I ended up sending the letter to my boss at the Ministry of Foreign Affairs in Washington.

The analysis by Le Gabon Enervant/Annoying Gabon: Here is an Ambassador who either is mocking the reporters from La Loupe who interviewed him, or even worse, ignores standard practices of his profession. Indeed, dear readers, when a complaint is made against a diplomatic mission or any of its employees, the usual practice is for local complainants to lodge their complaint to that embassy to make it follow its hierarchy, this is the classical pathway. Dear readers, all the time, during the Cold War, the protagonists demanded the expulsion of diplomats they considered undesirable, from their country, these letters of protest and expulsion were delivered in the same embassy in which was demanded the expulsion of diplomats. This is elementary in the practice of diplomacy, but apparently Eric Benjaminson finds it surprising that Gabonese citizens would go to his embassy to file a letter of protest against his activities in the country. He finds it amusing, but it is the only one laughing, which means this is a hollow laugh because apart from this letter that followed the traditional diplomatic channels, the same letter was conveyed directly to the State Department and other Gabonese citizens on their own initiatives, phoned these services to give their opinions on the actions of Eric Benjaminson in Gabon. So when Eric Benjaminson says smugly that he is amused, well it is a hollow laugh because his actions do not amuse a lot of free Gabonese.

3. In "La Loupe" the Ambassador said the following about a previous interview with Gabonreview: "During the period of political activities of the UN in late 2010 early 2011. It was a small period of political crisis in the country. At the time, my biggest concerns were first the controversy from time to time having to do with issues of tribalism. I worked in several African countries such as Burkina Faso, Nigeria, Namibia, where issues of tribalism are critical issues of the politics of these countries and there is no good that derives from it. So in the context of the UN, I had concerns regarding emissions someone of the party on policy issues regarding the Fang or policies of any ethnic group. So I took the initiative at that time and after that time to tell the government and the regime to accept criticism from opposition parties, be they from UN, UPG or others. The problem of the government which fully involved all Gabonese at the time was that UN was doing illegal things regarding compliance with Gabonese laws."

The analysis of Le Gabon Enervant/Annoying Gabon: This Ambassador takes people for idiots. He asserts that between 2010 and 2011, the activities of the UN were mainly focused on the exacerbation of tribalism and it is concern with the consequences of what could ensue that led him to say what he said in an interview published in Gabonreview. We want to take this Ambassador at his word and ask him to give us one example that will demonstrate that the UN party was engaged in ethnic stigmatization, one example, not two or three, one. Then the Ambassador said that a member of the UN party had Fang policy "programs"! Here is another statement that deserves to be cleared up, because we want to know who that member is; what kind of program is he talking about here and in what form the Fang policy manifests itself in Gabon? If the Ambassador believes that this situation was dangerous enough to make him say in an interview in Gabonreview that the party UN must disappear, so let him explain the outline of the situation in question and the evidence he had to reach his conclusion on the "program" on Fang policy.

Dear readers, you would agree with us that once again, Eric Benjaminson goes from inconsistencies to inconsistencies in his statements. But the wine is drawn, he will have to drink it to the dregs, because do not let him fool you; this interview in La Loupe is an attempt by the Ambassador to restore his image that looks more like Swiss cheese than anything else these days. He is totally discredited and his margin of hearing among free Gabonese citizens is now below zero. So he shrugs, hoping that there would be one or two Gabonese, naive enough to still lend him an ear. The selective judgment of this Ambassador is no longer in doubt. He would do everything in his power to help the consolidation of Ali Bongo’s power and as such he is willing to lie and invent situations that have only existed in his imagination. The Paulette Oyane Ondo’s case is very instructive in this regard because the Ambassador asks us to accept the existence of a fictitious interview that he uses blatantly to justify his action. No, Eric Benjaminson, all of your snickering contempt and hollow laughter are not being poured on the free Gabonese citizens, but your own honor and that of your country that you keep on tarnishing.