Showing posts from June, 2014
Show all

THE WHITE ELEPHANTS OF THE AFRICAN COUPE OF NATIONS 2012. LES ÉLÉPHANTS BLANCS DE LA CAN 2012

June 30, 2014
English Version The term "white elephant" is used to describe a project of prestige at the expense of the taxpayer, but proving unnecessarily expensive because its operation and maintenance become financial burdens for the same taxpayer. These are constructions often whimsical and irrational. Before the Africa Cup of Nations 2012 co-organized with Equatorial Guinea, many Gabonese who noted that some infrastructure built in rural areas of the Haut-Ogooué might turn into white elephants if the government does not plan for use patterns to promote those sites after the competition. Zealous advocates of emergence came out of woodwork loudly declaring that "nothing would be as before", with their famous National Agency of Great Works, everything was supposedly planned for the long term and that white elephants would not become part of the CAN 2012 legacy. When we told them of our skepticism, they replied: "let us move forward." But now, jus
Post a Comment
Read more 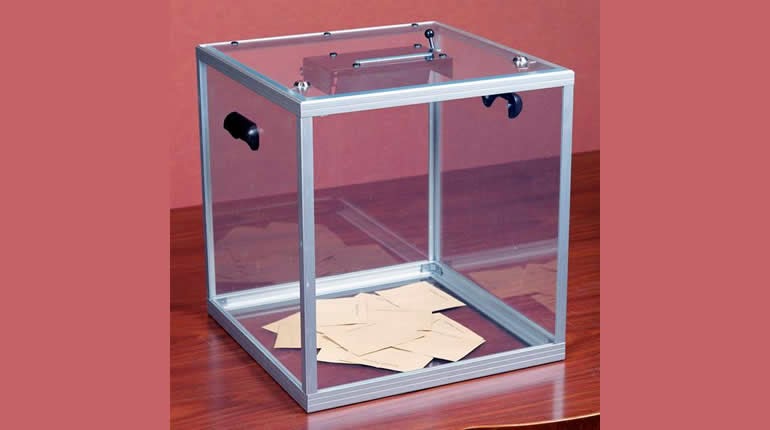 Image: personal archives English Version For some time, you've noticed dear readers, that we hammer as often as possible, the need for establishing a reliable electoral process in Gabon. But paradoxically, you have also noted that those who should be most concerned, meaning the Gabonese politicians of all stripes, do not say a word, prompting some to speculate that the current situation somehow suits everybody in the Gabonese political theater. In our case, we will continue to pound this subject so that finally the votes of the Gabonese people are respected. To do this, we will continue to push each other to reflect by asking tough questions such as why these people, these politicians, behave as they do? The following document discusses the Electoral Code. It was submitted to us by a friend of this blog; we publish it to stimulate debate, for you to use it to help us ask our politicians to stir things so change can occur. This text was written in the context o
Post a Comment
Read more

June 28, 2014
The unique convoy carrying Ghanaian bonus cash from the Brasilia airport Le convoi inédit transportant les primes des joueurs ghanéens de l’aéroport de Brasilia English Version Matches of the group stage of the FIFA World Cup in Brazil just ended. A very successful World Cup to date by Brazil, in terms of sport and organizational level, although there have been much more quirks than had occurred 4 years ago in South Africa. But one conclusion to be drawn is that once again the African teams were not able to respond to this appointment of competence and excellence in sport. This is a situation that many of our readers despair about, judging by the mail sent to us about it. While Latin American teams confirmed their dominance in the World Cup at home, that European countries remain where they are expected; it is those of African countries as in the previous World Cups, that have been the most disappointing, given their potential. But for this blog, the disappointm
Post a Comment
Read more 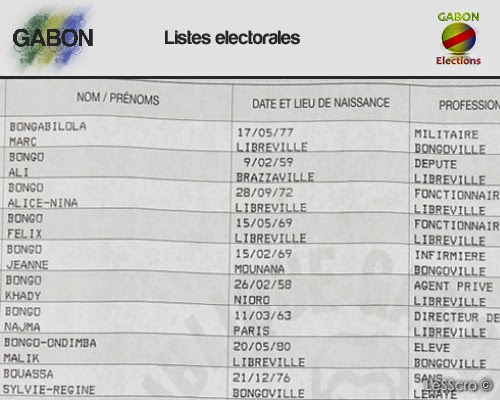 Photo: electionsgabon.org English Version Since the National Conference of April 1990, there is constant talk of the need to have in Gabon, free and transparent elections. But since 1990, people go to elections like sheep to the slaughter, without ensuring the reliability of the vote. When someone agrees to go compete in an event that they known to be rigged in advance, are they not themselves complicit in the charade? We are now witnessing a political turmoil ahead of the presidential election of 2016; Jean Ping has made a foray into the Haut-Ogooué; this is fine but history teaches us that all this would only be theater if the unit that organizes elections in Gabon is not cleaned and placed in neutral and trustworthy hands. Historically, elections in Gabon have this surreal image that the Gabonese people are asked to go choose "freely" a President among several candidates, with no guarantee of the reliability of the electoral process. For example, here w
Post a Comment
Read more 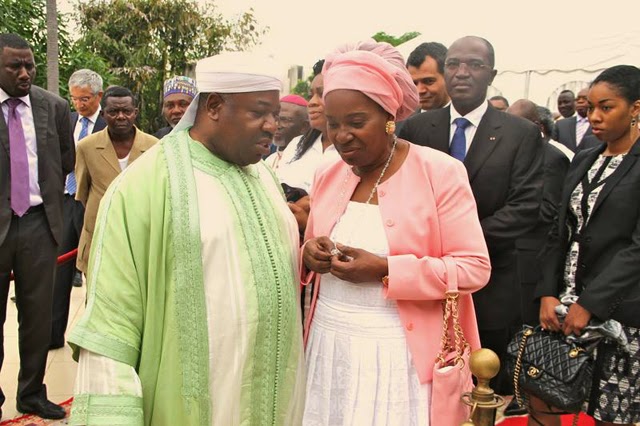 Ali and/et Pascaline Bongo (photo: COCOM) English Version In its latest edition, La Lettre du Continent tells us that the recent warming of relations between Ali and Pascaline of same name, had a strategic goal, that of countering the advance of Jean Ping in his race for the Gabonese presidency. This is what justified, according to this periodical, the confirmation of Pascaline Bongo in the honorary position of High Personal Representative of the President of the Gabonese Republic (High Representative of her brother, we are in a monarchy), but also a way to give her a "motivating" remuneration for her to do what she can to make Jean Ping abandon. Some think that Pascaline Bongo does not need money, but when you have her lifestyle, private jets, homes in the most exclusive parts of the world, there is never enough money! But according to the article, this first attempt by Pascaline Bongo has not been successful. Indeed, she would have used discrete channe
Post a Comment
Read more

MUST THERE, IN TODAY’S GABON, BE A LOT OF NOISE MADE ABOUT A SIMPLE BRIDGE? FAUT-IL ENCORE AUJOURD’HUI AU GABON FAIRE DU BRUIT POUR UN SIMPLE PONT? 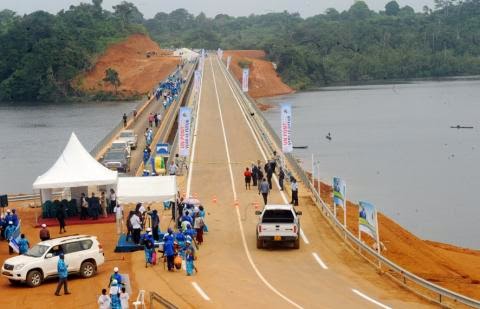 The bridge over the Banio Le pont sur la Banio (Photo: COCOM) The Eboro bridge Le pont d’Eboro (Photo: personal archives) English Version Ali Bongo and his friends went to inaugurate as great achievement of emergence, the bridge over the Banio. This bridge is 520 meters in length, cost nearly 83 billion CFA francs and connects the town of Mayumba to the rest of the province of Nyanga. But for us on this blog, even if a bridge is always beneficial for users who have their hassles reduced, it is always important to look at things coldly and with analytical rigor. Should there still be nowadays, so much noise about the construction of a building, a bridge, in a country as rich in theory as Gabon, which lacks so much? We explain the meaning of this question. This bridge will certainly satisfy some people in the short run, but what would be its usefulness if it appears that this bridge in the end will be proven to be a bridge to nowhere? That is to say that we
Post a Comment
Read more 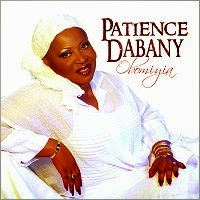 Photo: RFI English Version It is the Gabonese independent publication, La Une, which gives us the scoop; buildings of the barracks for housing the troops of the Republican Guard, formerly known as the Presidential Guard, are now under the control of Josephine Nkama, aka Patience Dabany, the false-true mother of Ali Bongo, who would be in the process of evicting the soldiers from these premises, in order to transform this public property into ill-gotten gains in the form of apartments for rent, for more illicit enrichment. Truth compels us to admit that we are not surprised to learn that another large piece of national real estate has passed into the hands of the Gabonese monarchs. In fact, anyone who would make a serious investigation in Gabon, to enumerate public properties which were illegally and fraudulently appropriated by the Gabonese monarchs and their cronies, would find that today the Gabonese State owns virtually nothing of value. What in surface belongs
Post a Comment
Read more 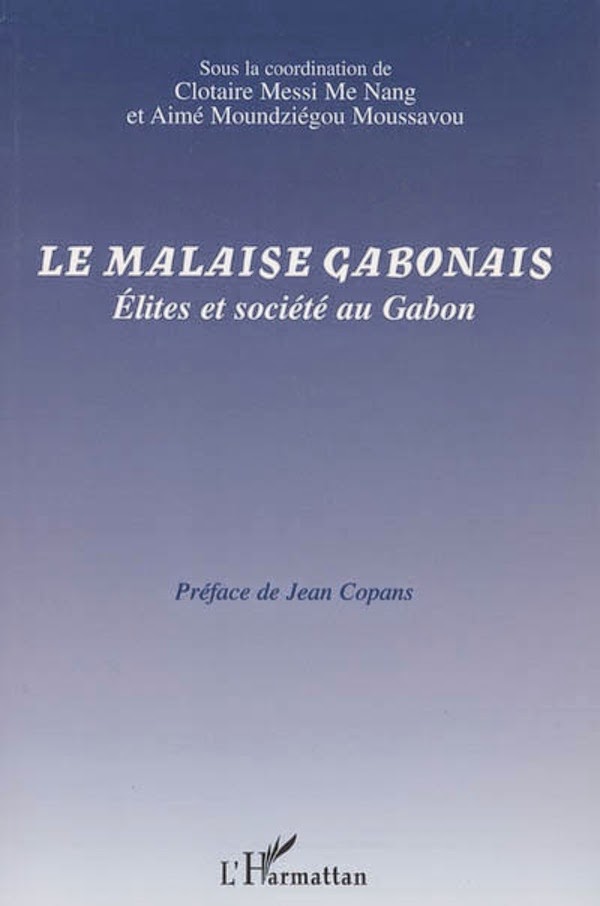 English Version After the recent missive by the now Chief of Staff of Ali Bongo, the newly “emergent” Samuel Ngoua-Ngou, addressed to his critics, including certainly this blog, a role we welcome, which was full of revisionist history, we wanted to visit the past, in a verifiable and verifiable manner. It is François de La Rochefoucauld who said “As rare as true love is, it is still less rare than true friendship." By this quote we can state here that we ask nothing of Samuel Ngoua-Ngou; not even to justify himself. We are not close to him, we're not friends, we do not expect anything from him. But one thing is certain, we cannot allow him to write half-truths that history can easily demolish. There is a book whose title is "Le Malaise Gabonais ; Elites et société au Gabon" by Clotaire Messi Me Nang and Aimé Moundziégou Moussavou; published by L'Harmattan. This book examines in an uncompromising manner, the idea that one has usually
Post a Comment
Read more 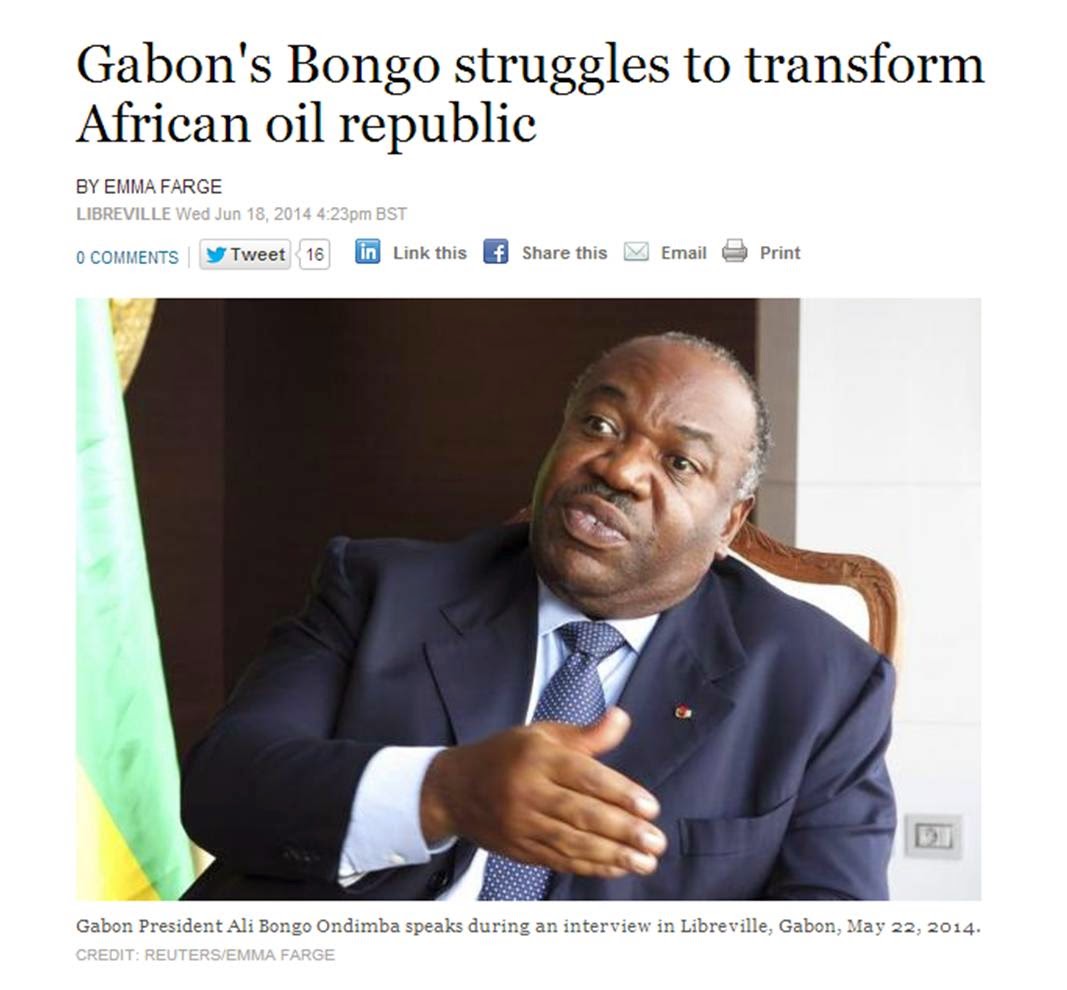 English Version Gabon's Bongo struggles to transform African oil republic BY EMMA FARGE LIBREVILLE Wed Jun 18, 2014 (Reuters) - Above the entrance to the towering oil ministry on a sleek boulevard in Gabon's ocean-front capital Libreville hangs a huge banner that reads like a warning: "Oil will run out but innovation is forever". For nearly four decades, since the discovery of offshore fields in the early 1970s, oil has been the economic lifeblood of this small, central African country. It has brought billions of dollars in investment and accounts for 80 percent of exports. But production from Gabon's ageing fields has steadily declined for years. President Ali Bongo, who won a contested election in 2009 to succeed his father Omar, has launched a drive to reform and diversify the $20 billion (11.78 billion pounds) economy. During his father's 41-year rule, Gabon was seen as a bastion of "Francafrique" – an opaque
Post a Comment
Read more
More posts