Showing posts from June, 2020
Show all

TO GOVERN IS ALSO TO KNOW HOW TO LINE UP PRIORITIES! GOUVERNER C’EST AUSSI SAVOIR AGENCER LES PRIORITÉS ! 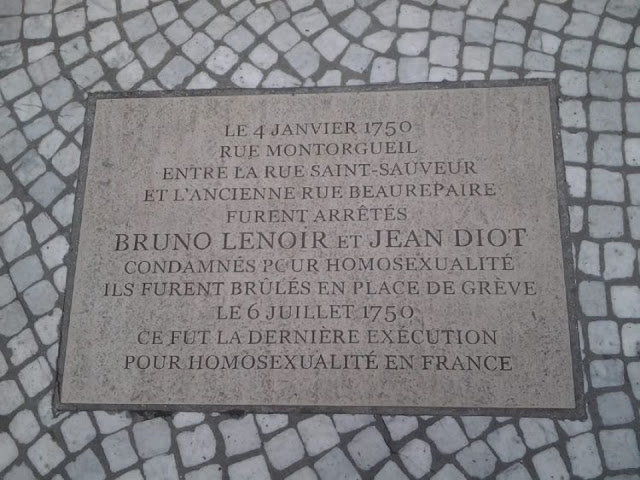 English version History teaches us that it was from the post-war period 1939-1845 that French households had a network for the distribution of drinking water at home. It was not until 1980 that all of France benefited from running water at home. It was in the 1970s that all of France became supplied with electricity. If the abolition of the crime of sodomy, which was punishable by death on a woodshed, was pronounced in 1791, immediately after the French revolution, it was not until 1982 that François Mitterrand’s regime ratified the decriminalization of homosexuality in France. More specifically on August 4, 1982. In summary, France decriminalized homosexuality after the whole country was covered in water and electricity in a reliable and robust manner. In Gabon, according to an article by Sylvain Vidzraku published in La Tribune Afrique on February 13, 2019, access to drinking water is of 25% in rural areas and of 45% in urban areas, an average of 35% o
Post a Comment
Read more 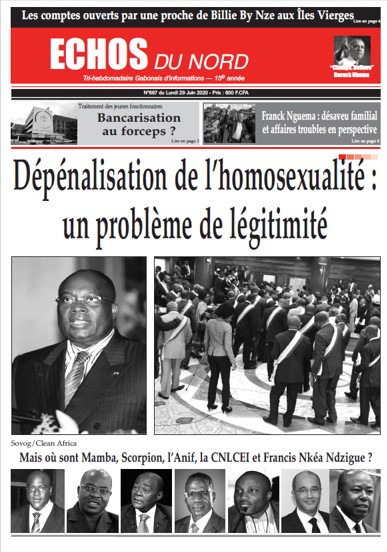 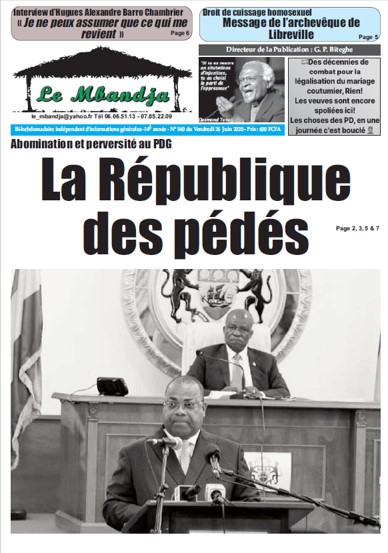 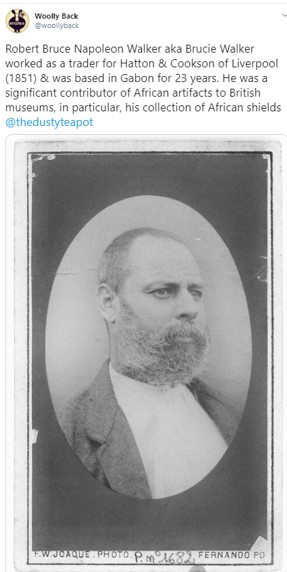 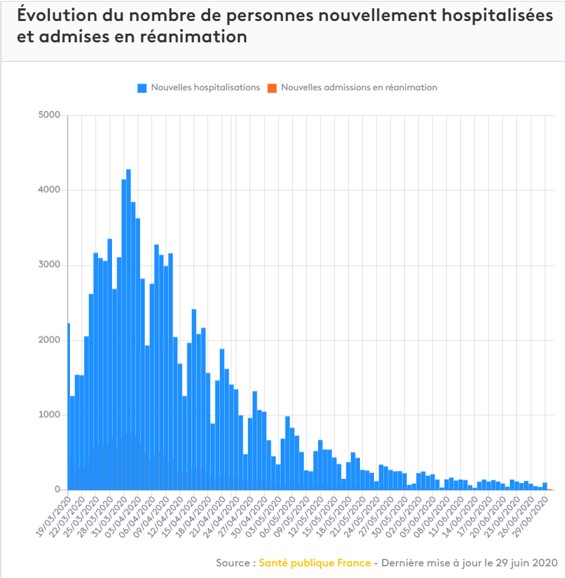 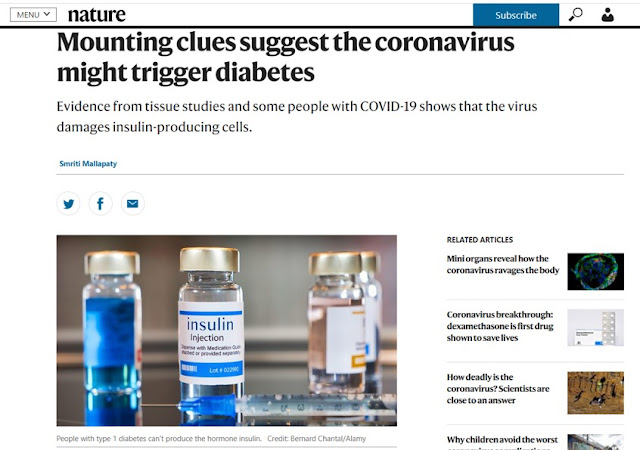 To read click here Pour lire cliquer ici English version In an article published in the world's number 1 scientific journal, Nature, it is revealed that infection by coronavirus may cause diabetes. It is already well known that diabetes (type 1 and 2) poses an increased risk of catching a severe form of COVID-19 and dying from it. However, more recent evidence suggests that the virus itself may induce the onset of diabetes, and in some instances the reports include individuals who undergo asymptomatic or mild cases of COVID-19 who subsequently develop severe form of diabetes. There are still many questions to solve. It is still unclear the mechanism by which the virus may cause disease; how often this occurs, and whether the diabetic conditions persist overtime or are later resolved. Version française Dans un article publié dans la revue scientifique numéro 1 mondiale, Nature ; il est révélé que l'infection par le coronavirus puisse
Post a Comment
Read more

AS WE TOLD YOU, GABON IS OPENING UP SINCE FRANCE HAD DONE SO ! COMME NOUS VOUS L’AVIONS DIT, LE GABON DÉCONFINE PUISQUE LA FRANCE L’A FAIT ! 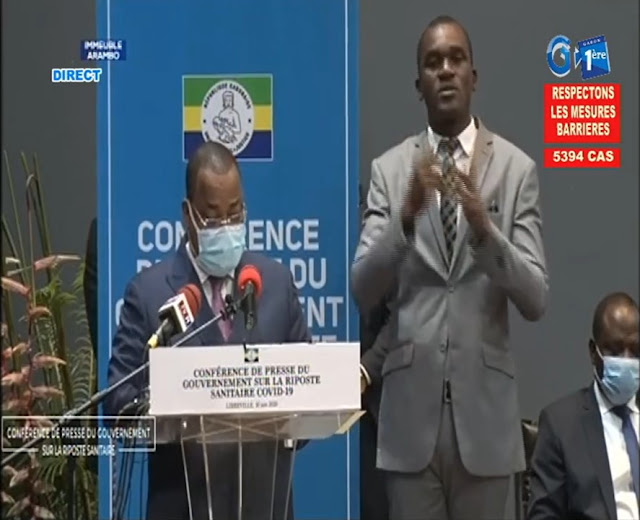 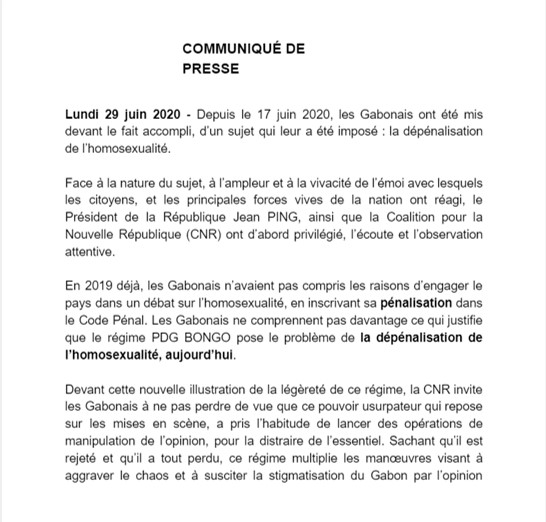 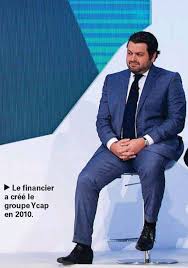 English version His name is Yariv Elbaz, he is Franco-Moroccan, he has had trouble with the Autorité des Marchés Financiers in France. But he found fertile ground in Gabon, where Sylvia Bongo entrusted him with the Gabonese sovereign funds. He therefore created the Ycap Fund which manages Gabonese assets. Yariv Elbaz is said to have been introduced in Gabon in the early 2010s, by Richard Attias, him again; the one who invited him to the New York Forum Africa. In 2014, Serge Mickoto, who headed the Gabonese Sovereign Fund, invested Gabon's funds in 3 entities administered by Ycap: 1. Agriland, specialized in agricultural projects, 2. InfraPPP, which invests in infrastructure 3. A third real estate fund, Real Estate Strategy. To date, neither Agriland nor InfraPPP have carried out any projects. More seriously, Agriland is said to have recently informed FGIS that it is studying one chicken farming project and another in agriculture. Without further details.
Post a Comment
Read more 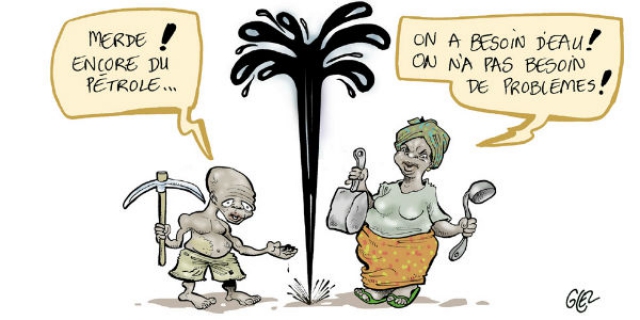 English version Development aid has long been considered one of the main solutions to promote economic development and fight poverty, in African countries; but today, many voices are being raised to denounce not only the ineffectiveness of this aid, but also its harmful effects on African societies. Dear readers, the reality is that very often, international development ends up undermining the dignity of African communities because these well-meaning projects may actually interfere with local people’s abilities to sustainably identify and meet their own needs. International aid is never a true partnership between donors and Africans. It is always donors dictating and Africans being yes men and women. We must remember that international development was initially built with two purpose in mind: -One, to create conditions that would enable the continuous colonial extraction of assets from newly independent African countries. To increase capitalist profits of western
Post a Comment
Read more 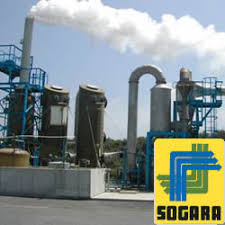 English version In 2018, the Swiss oil company Augusta obtained, by providing pre-financing of nearly 60 billion CFA francs, a contract going until 2022, relating to the removal of 500,000 tonnes of atmospheric residue (RAT-Rabi) produced by Sogara, which is now part of Gabon Oil Co. This contract had been negotiated by Brice Laccruche Alihanga, now in prison, with the help of Jean-Baptiste Tomi, son of the boss of the Corsican underworld Michel Tomi and owner of the company Afrijet. Noureddin Bongo and his mother have decided to terminate that contract, and are said to be in the process of finding a replacement for Augusta. There were allegedly irregularities in the contract signed by Brice Laccruche Alihanga. Apparently, an audit revealed that according to this contract, Sogara had to deliver 500,000 tonnes to Augusta each year; but the annual production of Sogara did not exceed 350,000 tonnes. It therefore follows that Brice Laccruche Alihanga and his accomplice
Post a Comment
Read more

English version An academic article published in the journal World Development, by researchers of the Department of Economics of University of Massachusetts, in the USA; published in 2019, analyzed the relationship between the social acceptance of homosexuals in the world, and economic and political development. These researchers analyzed economic and political data from 132 countries and found that homosexual lifestyles are very limited in countries that are underdeveloped, have high unemployment, have low industrial productivity, receive underinvestment in human capital, and have inefficient allocation of human resources, as well as very few political freedoms. The map above shows, by country, the percentage of the population that is favorable to homosexuality. What you notice is that western countries have percentages of at a minimum 60% of acceptance; while in Africa, most countries have percentages of 0%. The African country with the highest percentage of
Post a Comment
Read more 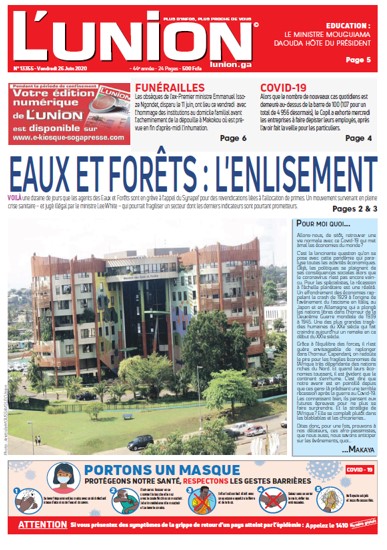 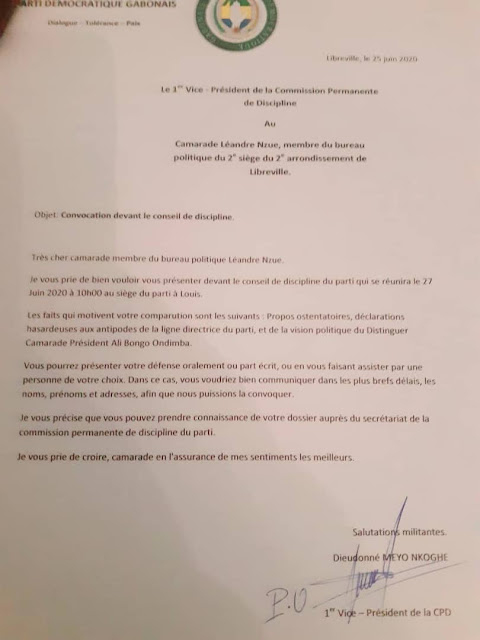 English version In 2009, Olam market value collapsed, and its market share was valued at zero, worthless. A company by the name of Muddy Waters declared that Olam was heading toward bankruptcy. To keep Olam solvent, Singapore’ sovereign fund Tomasek, had to rescue them; but Olam knew they needed to bring in new sources of revenue. To do that, targeted Africa. Olam came to Gabon, linked itself with the Ali Bongo’s regime and made Ali Bongo’ son the second in charge at Olam Gabon. For every project that Olam started in Gabon, the country took huge loan that were funneled to Olam. For one such project, the building of a fertilizer plan in Port-Gentil by Olam, Gabon took out a 750 billion CFA francs loan that went 100% to Olam. The problem? The factory was never built. Who is left to repay the loan? The Gabonese people. Once Olam had established itself in Gabon and that all the money had been received from the Gabonese government, Gagan Gupta wanted to prevent Olam from
Post a Comment
Read more 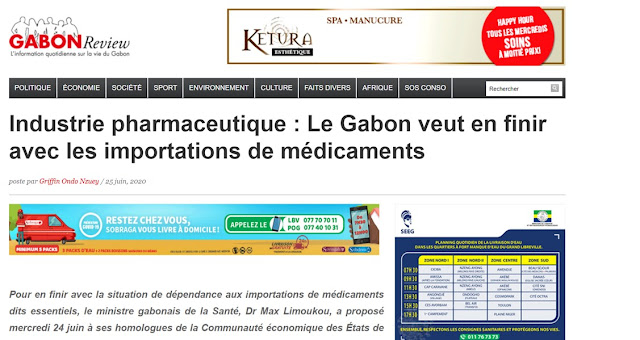 English version As in all other areas, Gabon imports all of its medicines mainly from France. Even when there are cheaper African alternatives that give all the guarantees of safety, Gabon continues to import its medicines from France. Gabonese medicines are bought in bulk by UBIPharm and local pharmacies order from UBIPharm. What is UBIPharm? It is a French entity which distributes medicines in the former French colonies and in the French overseas territories. Pharmaceutical supply in Gabon needs to be liberalized by allowing customers to buy drugs produced cheaply in African countries. Here is a list of African pharmaceutical companies which you can look at by clicking here . Version française Comme dans tous les autres domaines, le Gabon importe tous ses médicaments principalement de la France. Même quand il y a des alternatives Africaines à meilleur marché et donnant toutes les garanties de sécurité, le Gabon continue d’importer ses médicam
Post a Comment
Read more 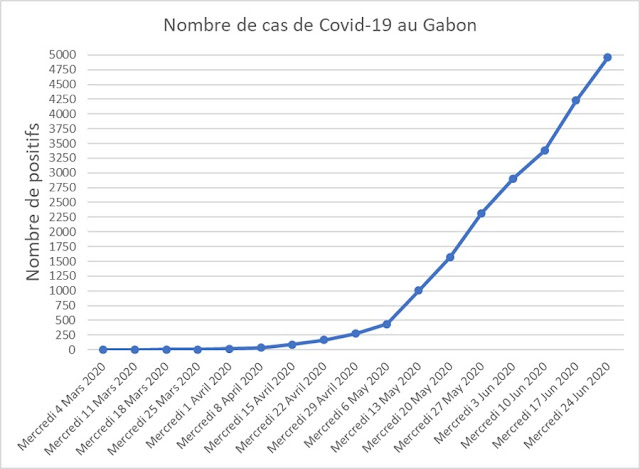 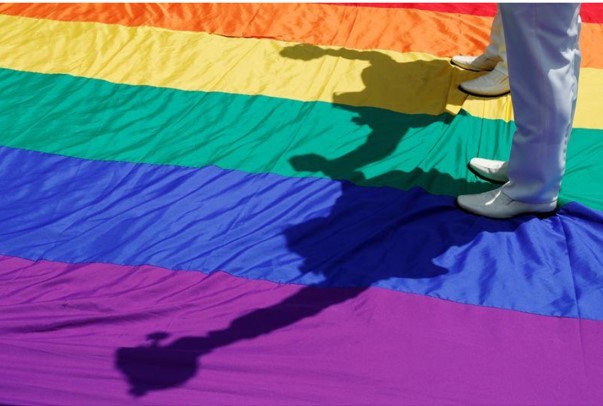 English version To the many Gabonese who wonder what was the urgency for the National Assembly to decriminalize homosexuality right away, we will simply answer this: Sylvia Bongo! Dear readers, you know that on the subjects of society and sexuality, the Gabonese people, like all African peoples, are fundamentally conservative. African societies are hardly receptive to homosexuality. It will therefore be difficult to impose on African peoples the acceptance of these practices; for essentially cultural reasons. However, Sylvia Bongo wanted a trophy giving her a breath of fresh air in terms of public relations, following Ali Bongo’ stroke. PDG MPs were therefore ordered to decriminalize homosexuality so that the regime would reap the public relations dividends that would accrue. The audience for this decision is therefore not the Gabonese people or even the African peoples, but the Westerners who will put the Bongo regime on the list of benevolent progressives, si
1 comment
Read more

English version Dear readers, a few days ago we warned you that the criminals who run the Copil were preparing to present you with miraculously good statistics, to justify the total lifting of the lockdown in Gabon. The logic being that Gabon could no longer remain locked down while France had now ended it. Speaking via several newspapers on the regime’s payroll, including the daily L'Union as you can see above, the Copil now spreads information in a way straight out of Mborantsuo's methods, saying that the number of people who have recovered from the Covid-19 would have suddenly exploded. You will not be told by what miraculous mechanism the number of healed has increased by many folds in comparison with the previous months; but you will simply be told that considerable progress has been made. Note that nothing in the standard of care in Gabon has been changed! No new drugs have been introduced against Covid-19 in Gabon! No new expertise has been
Post a Comment
Read more 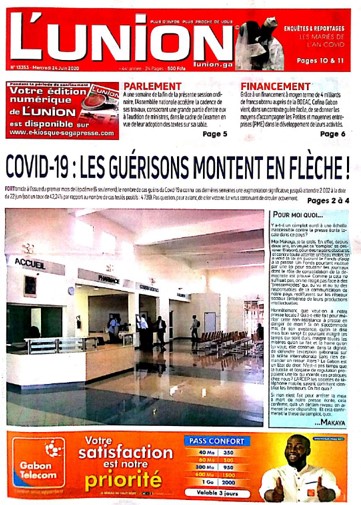 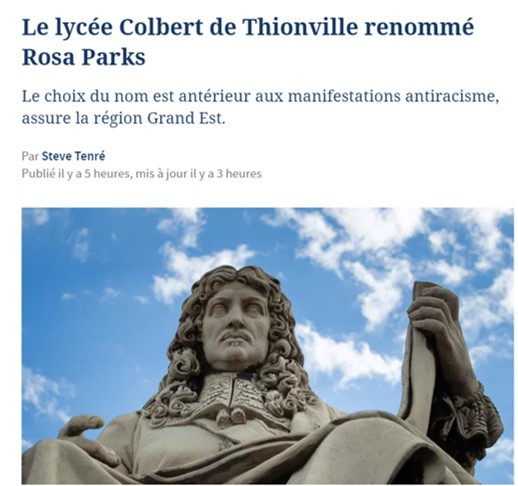 English version Around the world, following the publication of unbearable images of the murder by asphyxiation of George Floyd, an African-American; anti-racist demonstrations have been held. These demonstrations have given rise to deep reflections which are leading to a questioning of the relationship between the Western countries which were involved in the slave trade, and their attachment to characters who played a big role in the slave trafficking, or in colonization. The consequence is that at the moment, we witness that statues and monuments representing major figures of colonialism and the slave trade, are vandalized, decapitated, and sometimes downright taken down. These statues have become the emblems of the Western problematic in that they would like to present themselves as being progressive, while at the same time adulating the strong symbols of their past oppression of non-European peoples. Westerners must choose between protecting their criminal
Post a Comment
Read more 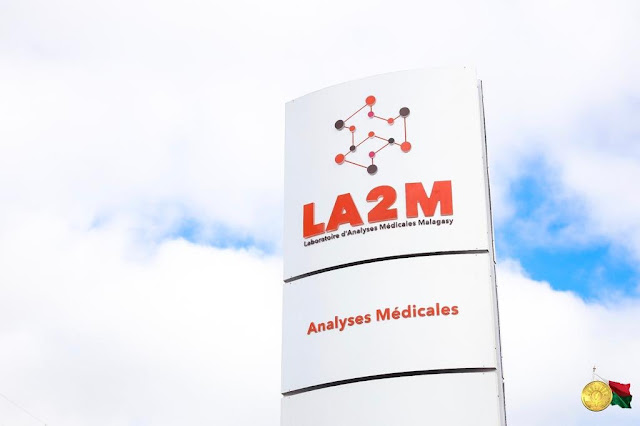 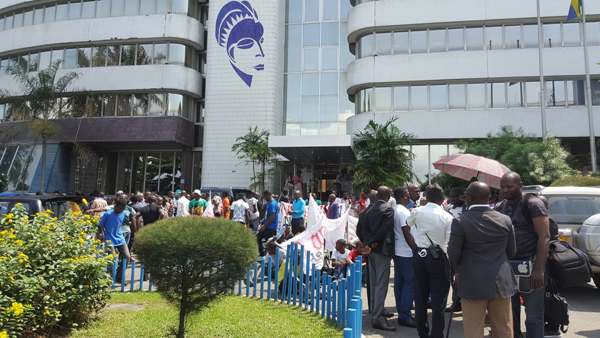