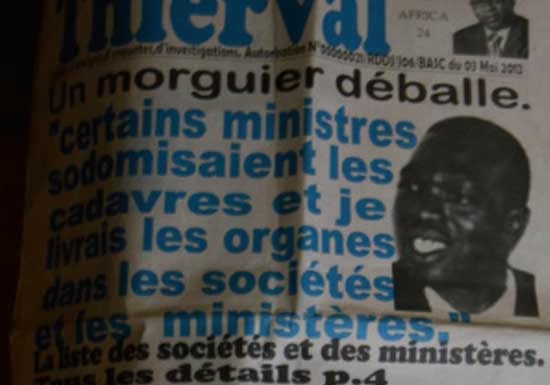 Waiting for the day when a Gabonese running the supply chain of human organs would come out and reveal what they know, we offer in this post the amazing testimony of a Cameroonians morgue employee regarding occult practices being done in some circles of power of that country. Can anyone doubt for a moment that the same dirt is endemic in Gabon? We let you judge for yourselves. These revelations are published in the Cameroonian press.

Here is the article bellow.

Since April 2010, Didier Ovono is no longer responsible for the morgue of the regional hospital of Bertoua. In the interview he granted us on Monday, August 14, 2013, this former morgue employee made revelations about his profession and the evil practices he has had engaged in with some Ministers.

Moving testimony of a 40 years old morgue employee, married and father of three children from his home near the border with Gabon.

How did you become responsible for the morgue?

I first worked as a stretcher porter for five years. It was at the end of that function that I was recruited as head of the morgue in the regional hospital of Bertoua, through a minister who knew me as a great sorcerer. I was also trained as an embalmer by the person I was replacing.

What was your job?

As an employee of the morgue, meaning where the dead bodies are kept. Our job was therefore to keep the morgues to -2 degrees C. We delt mainly with administrative formalities concerning the retention and transfer of remains to funeral homes. However, a morgue employee cannot be confused with an undertaker, we cannot talk about undertaker, in a hospital morgue or funeral home as people do. The undertaker is an employee of a funeral home, the service organizing the funeral of a dead body, the removal of the body from the morgue to its burial in a cemetery. To wash, embalm, beautify the body, are also part of the work of an undertaker. In Cameroon, we need to talk about morgue employees and not undertaker, as people do not know, they confuse morgue employee and undertaker, without being totally to blame, because the two businesses consist of handling of corpses.

Did you happen to play the undertaker?

This often happened to me and it did not displease me to do so. In such situations, I used to feel like I was being valuable for something.

Are the morgue employees seen as ordinary people in our society?

This is not quite the case. People say I have mystical powers. People were afraid of me, as well as they were of the cadavers.

Did they make you a corpse before the time?

No, people do not make me into a corpse. But the fact that I was constantly in contact with the dead, frightened my peers. People thought I was a superman.

You are married with three children. Did you not frighten your family by your job?

I had absolutely no problem at this level. My wife regularly came to my office and often assisted me when I was working on my end of the month reports, which I was doing at night. Maybe she had part of my supposedly mystical powers (laughs).

The manipulation of corpses, tell us about it

At first I had a cold sweat. After I found out that there was no reason to be afraid. We often have strange sensations in handling corpses. There are bodies that are manipulated with ease. But there are others that when manipulated we feel a little unease.

Some people approach you to obtain human organs. Is this true?

It's true, it has happened to me several times. I received the visit of Ministers. CEOs of private and state companies. Those who left Yaoundé to come to Bertoua because they wanted to be discreet about their shenanigans. They arrived at midnight, themselves driving their cars. Some preferred to sodomize the dead, according to the practice imposed on them in their occult environment. Others who were not brave, paid me so that I could deliver to their office. This always happened between 23h and midnight.

I was asked because I maintained the business well. For the cadavers, I had no compunction in doing this. I could earn 500,000 CFA francs per month. Delivery within departments dis not always concern ministers; there were also employees who were practicing these things to access higher positions.

What are the ministries and companies where you were making deliveries?

I will not give you the names of ministers (laughs) because I have to protect you. In my case, I'm not afraid of anybody and they know me, they cannot reach me. Many ministers with whom I have dealt are still in office, others are in prison.

When I delivered the organs to these people, the meeting points were the (hotel name removed; Editor's note), and often (...). They contacted me a week before, I got the number of a room. And when I arrived at the hotel, I did not stop at the front desk. I went directly into the room and I placed the package that was either the tongue, teeth, heart, it depended on the practice. I was paid by delivery 55 000 or 100 000 CFA francs. I made deliveries to... The ministries were... ( 237online.com willfully omits to print the companies named; Editor's note)

All the people who needed to receive deliveries, wanted access to a post. There are those who were put of these organs on their clothes for a year, when they went to work. I assure you, I have no respect for some ministers. They are monsters hiding under suits. Some of them are addicted to the most bizarre practices.

Is your consciousness at peace after you dismembered human remains belonging to families affected by grief?

To tell the truth, I cannot kill someone and sell organs. You know, when you're dead, it's over, it's the end. Your soul is gone. The body that is there, before going to rot in the ground, may be useful, you know what I mean.

Do you think about their families?

Have you talked to a corpse one day?

Yes, I think the dead hear. Because as far as I know, the spirits are never far away. What amazes me is to see side by side the bodies of rich and poor, while in real life there's often a gap between the two. I thought that the time spent in the morgue would put me above others. But one day, after the loss of a dear friend, I cried more than anyone. It made me understand many things.

Any work deserves remuneration. How much are morgue employees paid in Cameroon?

In Cameroon, there is no pay scale for morgue employees. But these are guys who live well. Unfortunately this is a profession frowned upon by some people. There's a constraint, we work a lot with regard to the peculiarity of the job. We do not yet have an association, we are not many in the country.

Do you have a call to make to the people?

I want to tell Cameroonians that the morgues belong to them. When there is generally a death, what not to do because there may be problems of contagion. If the person died of a contagious disease. I invite them to deposit their bodies to a morgue where the conditions of preservation of dead bodies are met, even if it costs them 15,000 CFA francs a day.

With everything you just told Cameroonians, will they still trust you?

What did I say? (laughing out loudly)