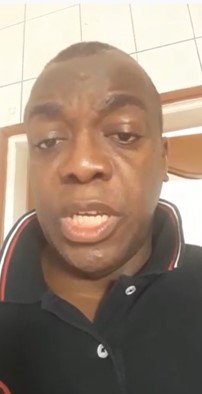 "Privat! Privat! Privat! ”. Thus resounds the cry of his wife Charlotte who has just seen him in the distance in the courtyard of the Libreville central prison in Gabon. She is moving to attract the attention of her husband. He looks up, sees her and smiles, waving at her. The guards ask him to make less noise, then shut up and leave. Never mind, she saw it and that is essential because, since the beginning of March, the visiting room has been closed due to the COVID-19 pandemic.

Privat is heading for his cramped cell which he has shared with four fellow prisoners since July 2019, the date of his incarceration. Privat Ngomo is what we call a prisoner of conscience.

The international magazine Men of Africa, in its March 2019 issue, calls Privat Ngomo a rising star in Gabonese politics. He was born on March 20, 1967 (53 years old), he is married and father of four children.

Privat is a civil servant of the Gabonese administration who worked first at the Ministry of Finance, then at the Ministry of Water and Forests and finally at the National Agency for Digital Infrastructures and Frequencies. He is fundamentally patriotic and pan-Africanist, versed in culture and politics, the real one, one that carries and defends the values of good governance, integrity, loyalty and transparency. He is a man of conviction, deeply committed who practices frank talk without concession and without taboo. Which sometimes makes him seem arrogant. In an environment where the language of beating around the bush is the norm, it is clear that Privat is disturbing the status quo, especially when he talks about the Gabonese regime and the domination and spoliation that France maintains with its former colonies which allegedly became independent in 1960. Be it either verbally or in his writings, he remains constant in his positions and expresses them without detours in all circumstances. All the people who have known him recognize him as intelligent, competent, rigorous and without pretense. He likes contradictory debates.

Privat Ngomo is part of this generation of Africans trained in Europe in the late 1990s. He returned to Gabon to participate in its development, refusing to inflate the Gabonese diaspora already present in France. He dreamed of something better for his country which, despite or perhaps because of its wealth, was still one of the developing countries. It must be said that since August 17, 1960, the date of Gabon's independence, this country has known only three presidents: Léon Mba from 1960 to 1967 (7 years), Omar Bongo from 1967 to 2009 (42 years) and Ali Bongo, son of the latter, from 2009 to date. All these presidents have never been elected by the people but always placed in office by France via its French-African policy implemented by Messrs de Gaulle and Foccart. This policy continues to this day even if the "bride has changed her dress".

After analyzing the evils that plague and impoverish his country, he realizes that this better thing he dreamed of will never be possible because the political and economic functioning of Gabon does not allow it.

It was in 2009 that he began to invest in national political life, the year of the presidential election following the death of Omar Bongo Ondimba. He then joined the opposition, for the forces of alternate power and change. He supported candidate Casimir Oyé Mba as spokesperson. In the August 2016 presidential election, he supported Jean Ping, the consensual sole opposition candidate, as head of his electoral commission.

He did encounter Ali Bongo’s electoral holdups up close during the 2009 and 2016 presidential elections, which were yet validated by a constitutional court under his orders chaired by his mother-in-law and by France. On the night of August 31, 2016, he almost lost his life during the heavy weapon attack on Jean Ping's headquarters located 500 meters from the French army base in Gabon, which did not move…

On September 15, 2017, Europeans MPs voted for a resolution envisaging targeted sanctions against those responsible for post-election violence, human rights abuses and the sabotage of the democratic process in Gabon. The application of these sanctions is still pending. France would block their implementation ...

After Ali Bongo use of force, Privat entered into peaceful resistance and supported the Coalition for the New Republic (CNR) chaired by Jean Ping. He becomes a staunch defender of the truth of the verdict at the polls. Following Ali Bongo's stroke in Ryad on October 24, 2018, he militates without success for the official declaration of a vacancy of power due to impediment, and against tampering with the Constitution by the constitutional court .

He was interested very early on in France and its relations with its former colonies, including Gabon. He has taken note of the political and economic agreements which link African countries to France and understands that if France is not the only responsible for African chaos, it is the main culprit for it with its French-African policy and its perverse effects. To guarantee its interests, it "institutionalized" the validation of rigged elections, the support of dictators in its pocket, financial aid via the French Development Agency while knowing that it is regularly diverted, the perpetuation of the FCFA, a colonial currency that prevents the development of African countries, the maintenance of military bases ready to intervene for the sole interests of France and dictators…

The report is scathing and dramatic: sixty years of French cooperation, sixty years of misery without any French-speaking country in sub-Saharan Africa emerging from underdevelopment. Africans very often attached to their land have been forced to immigrate and swell the ranks of the undocumented and the diaspora in France.

A question must be asked: how has France, the fourth world power, failed to help African countries, however rich in their minerals, to get out of underdevelopment? Terrible answer for Africans: she did not want it, she never wanted it or even wished it ... As General de Gaulle said "France has no friends only interests".

So how can we be surprised by the appearance of personalities like Kemi Seba, Nathalie Yamb after those of Sékou Touré, Thomas Sankara, Patrick Emery Lumumba, Barthélémy Boganda, Ruben Um Nyobe ... who live this situation as a cruel injustice.

How can we be surprised that in the heart of a generation of competent, uninhibited, conscious and active Africans, a growing anti-French and anti-françafrique feeling is increasing with a furious desire for freedom, development and better living.

How can we be surprised that the African youth who represent more than sixty percent of the continent's population, half of whom are under the age of eighteen and who constitute, without a doubt, a true demographic bomb, are throwing themselves in this noble fight for freedom: the freedom to choose their leaders, the freedom to invest, the freedom to develop, monetary freedom, the freedom to decide their future…

So, one afternoon on July 12, 2019, two days before July 14, the symbolic date of the liberation of France from royal yoke, with around twenty young Gabonese patriots, courageous and determined, Privat Ngomo stopped traffic in front the French Embassy in Gabon in order to send France a filmed message broadcasted live on the Internet which denounced official France and its networks and armed wing françafrique.

This act, which he called "Operation Lumumba", in reference to the patriotic fiber of this illustrious African, was aimed once again at denouncing France's neocolonialist interference in Gabon. While condemning the predation system of françafrique, detrimental to France's relations with its former colonies, he called on France to work with the new generations and the new elites for mutual benefit.

The message basically said the following:

“One cannot, in front of the whole world, proclaim themselves the homeland of enlightenment, human rights, democracy, the rule of law, and at the same time secretly conduct a foreign policy of confiscation of the sovereignty of the African people in the French-speaking sphere, with a goal of exploiting, to their detriment, the natural resources and the raw materials of their soil. This highly criticizable policy, which has lasted since pseudo-independence, confines the African populations to extreme poverty, extreme misery and African governments, to shameful begging. No development is possible under these conditions, whatever the size of the aid granted to the continent. The African youth are then forced into exile, illegal immigration to Europe, in search of a prosperity that official France and its networks deny them at home. "
He ended his message by saying "Official France and its networks would be well advised to understand that they now have a new generational interlocutor with whom they would benefit from designing new relationships more satisfactory for both parties. It is a crucial requirement, it seems to us, of this new millennium "
In addressing France, Privat has only drawn the consequences of a flouted sovereignty and addressed the right interlocutor.
He was arrested that day and after being detained for five days at the Urban Security headquarters, he was imprisoned in the central prison on July 16, 2019. He is still in preventive detention…

For his family and his support committee, Privat is a victim of the françafrique policy of France. France could not bear to be called out, moreover, in front of its own embassy. She would therefore have validated his arrest by the Gabonese authorities and his continued detention.

Privat pays the price for his freedom of expression, a right yet recognized in the Gabonese constitution and an inalienable right in France, the homeland of human rights and freedom of expression. After refusing to swell the ranks of the African diaspora in France, he now swells the already long list of political prisoners in Gabon.

History has taught us that no repression will silence a people who aspire to freedom, to a better life.