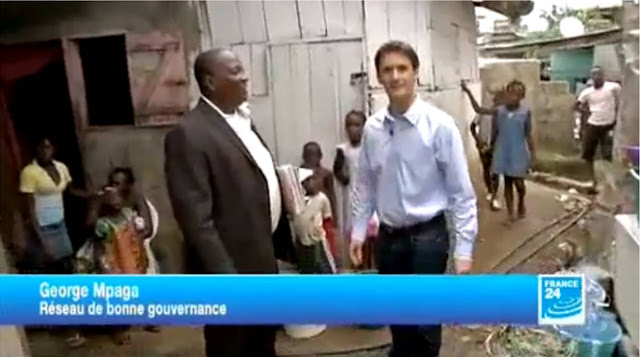 After the broadcast on France 24 of a report on the disastrous state of the University of Libreville reflecting the incompetence of the Ali Bongo government and his inability to provide Gabonese students with appropriate structures to ensure quality training, and on the eve of the great march of the Women’s Collective against rituals crimes, supported by a number of civil society organizations, the government of Ali Bongo and his allies in the service opposition, continue in their attempt to intimidate members of the Civil Society. Thus their intelligence services, through the DGR (Directorate General for Research), sent a summons to George MPAGA for Friday, May 10, 2013 at 9:00 am following a complaint lodged by the service opposition member Barrister Louis Gaston Mayila. According to the officers of the DGR, Barrister Mayila, whose political activism however ridiculous is well established, is complaining to see his illustrious name on the list of alleged sponsors of ritual crimes posted on Facebook by members of the Gabonese diaspora. For this service opposition member, Georges Mpaga would be the author of that list.

After the political trial against Marc Ona Essangui, actor of the Gabonese civil society, this summon is a smokescreen by Ali Bongo’s dictatorial system and its allies facing the demands of the civil society; making imperative requests that action be taken against the alleged sponsors and performers of ritual crimes, who are government officials of the PDG party regularly cited by the press, but who enjoy the protection of Ali Bongo-PDG’s regime.

This request remains a credible indicator of the true will of Mr. Ali Bongo and his government to effectively fight against ritual crimes and to reassure the Gabonese people every day who are traumatized by the discovery of corpses of children, women and men killed, brutally mutilated, body parts collected for witchcraft, occult and fetish practices.
Given the foregoing, the members of the Gabonese civil society, anti-corruption activists, human rights and actors involved in the process of restoration of democracy and the end of the hegemony of the Bongos / PDG in Gabon, its institutions, would never let themselves be intimidated by these maneuvers of a failed regime, deaf, blind and insensitive to the misery of a people they are denying freedom, that they are repressing, starving and enslaving. Georges MPAGA is not responsible for the publication of any list whatsoever, reserves his right to lodge a complaint against Mr. Mayila for false accusation.