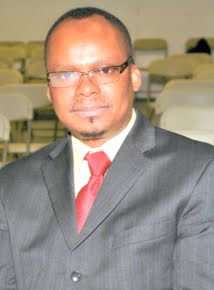 Daniel Mengara is a Gabonese political figure as well as a prolific pundit and critic of the Gabonese body politics. He is a professor at Montclair State University, in New Jersey, USA and is therefore very well equipped to comment on the recent proposal by Ali Bongo to order official bilingualism in Gabon. Below is the recent article he has published on the subject.

I am often asked what type of hemp do the Bongos smoke...

Ali Bongo, like something out of a long neurotic coma, noisily announced his intention to make Gabon a bilingual country French / English. Yes, just like that, poof! Ex nihilo. A simple magical incantation.

We are accustomed, indeed, to the intemperate statements of Bongo father and son. We are accustomed, of course to the pronouncements of these kinglets who have specialized for 45 years in incantations advertising renovations that renovate nothing, radical reforms that recast nothing, fighting governments that fight nothing, developments that develop nothing, emergings that emerge nothing, when it is not simple promises of dwellings per thousand (5,000 per year) which house no one because never built, and so on. With the Bongos, it is the soporific vapor of a regime of forty years, lacking inspiration; that continues to confound the sensational announcements of projects never finished with coherent and sustainable development of a country. Under the Bongos, policy, development, economics, are downright voodoo. Too complicated for brains too small.

Even as industrial Gabon is not even able to make a "douk-douk" (a knife), even as the educational system is in full decadence in a country where students are now put in stadiums transformed into makeshift schools like in a country hit by a tsunami, stadiums themselves botched for the time of an African Nation Cup of football; even though Gabon is already unable to properly educate the few children who are born, in the existing curriculum, due to both lack of teachers and classrooms in sufficient numbers; Ali Bongo noisily announced its intention to make a bilingual country of Gabon.

Where? When? How? With what? In which Gabon?

I know that I have already, through my many attacks, forced Ali Bongo to abandon his childish oiled "curly-Curlys" of a fake Michael Jackson: This is already a good thing for our eyes, too attacked by this kind of childishness at the top of the state, I also know there are mosquitoes in Gabon giving malaria and "tsetse" flies that cause sleeping sickness, but, I think there is a big problem of mental balance in the noggin of the Gabonese dictator. There is a missing or blown bolt.

I leave aside the discussion of the Francophonie and françafrique. I also leave aside the issue of Franco-Gabonese rivalry born, according to rumor, of the election of François Hollande who has no love for the offspring of the late Omar Bongo. I rather dwell here only on the purely mechanical aspect of the artificial transformation of a country like Gabon into a French-English bilingual country.

Does Ali Bongo really know what that entails as human and cultural capital (training of teachers and reformatting the entire national thinking in terms of culture), in ideology (general reform of the education system in the context of a comprehensive, integrated and coherent national development) and in finances (colossal resources to be allocated to such a reform) to transform a country with a French administrative tradition such as Gabon into an administratively bilingual country?

Does Ali Bongo know what it entails to changes from primary to higher education, to adjust an already inconsistent and dying education system to the rigors and demands of educational policy for bilingualism?

Does Ali Bongo know what it means as cultural transformations for a society as diverse as the one in Gabon, into a society shaped by precepts of artificially orchestrated bilingualism, and this in a country that has never had coherent cultural policy to begin with, a country which, in addition, has never tried anything of this magnitude, apart, perhaps, to turn for forty-five years the Gabonese women into professional buttocks dancers to the glory of the most immoral bongoïsm!

The Rwanda dispenses also, and since 2011, almost all of his teachings from kindergarten through 4th grade in Kinyarwanda. Moreover, culturally, the use of English and French in this country remains subsidiary compared to Kinyarwanda, which remains the language of the people. To copy, or even "ape" others, is good. But still there is a need to know what to copy or the historical-sociological reality on which others have built their adoption of English as one of THREE official languages, while placing the soul of Rwanda, Kinyarwanda, above all languages artificially imported.

In a country like Gabon that has no policy to promote indigenous languages, a country which therefore inevitably loses its cultural and sociolinguistic heritage over the years because it is too outward leaning in its consumption and cultural expression, one would expect Ali Bongo to demonstrate a minimum of national revival turned inward, that is to say, a vision towards the promotion and the induction of national cultures and languages neglected for 45 years. But when instead, the national dictator can birth such an enormity, especially in a country already incapable of minimum educational standards, there is a problem, this is an unbearable biafrerie, a biafrerie too many.

Oh! It is this that the Gabonese people need today? That's right, now, the first policy emergency of Ali Bongo's "Emergence" is to turn Gabon into a bilingual country? A bilingual country whose bilingualism will, as if by magic, delete all the bongoïst flaws that have been preventing the taking off of Gabon for 45 years?

As if by magic, the 35% of Gabonese who suffer from chronic unemployment would now find a job through bilingualism! Congratulations "emergence", now we can get down to business: go English-speaking!

As if by magic, the 5000 units of housing per year promised three years ago now proliferate throughout Gabon: Gabon has reached full housing! Congratulations "emergence", now we can get down to play: make room for Anglomania!

As if by magic, the Gabonese have now ceased to search the bins in Mindoubé looking for pittance among rats and flies! Congratulations "emergence", now we can get down to "cool" things, make room for Anglophilia!

I personally have nothing against the Anglicization of Gabon. I am even very pro-capitalist and of the liberal approaches to the economy that are the strength of the Anglo-Saxons. To learn English seems to me to be a coherent choice, a choice that any country or citizen aware of globalization cannot fail to make individually according to their aspirations and in the context of a coherent educational system. But there is a difference between recognizing this reality and the fantasy to make an entire nation fully bilingual! In my opinion, therefore, it is more a matter of national priority than anything else.

As such, it seems rather indecent, when the country is faced with multifaceted crises-political deadlock, economic blockade, increase in living expenses, human genocide in hospitals and mental genocide in schools, in addition to the despair a traumatized people waiting for concrete answers to these 40 year old wounds- Bongo wakes from his hazy coma to make the Anglicization a national priority. It is with English that Ali Bongo would now solve all the problems of chronic underdevelopment afflicting the Gabon since he and his father have had the mission to confiscate the national destiny?

This is called forward flight. This is also what happens when a self-proclaimed President has nowhere in Gabon any traceable cultural roots. He can not understand the need to promote national cultures to which he does not feel connected or attached. He externalizes everything because he has nothing to internalize. In the end, we realize that Ali Bongo is really a big empty barrel completely devoid of substance and of cultural matrix that is the pride of Gabonese people, the true Gabonese people. In his mind, there are only biafreries.

It is true that some would think of Ali Bongo as a hero for trying, by this gesture, to depart from the cultural domination of France in Africa. Except that the Bongos have never been nationalists. Proof: no African nationalist can switch a colonial language with another colonial language and present it as nationalism.

I had at the start of this article the intention of asking what fly had stung Ali Bongo, but I think ultimately the question most appropriate in this case, is, "What kind of hemp did Ali Bongo smoke during his last visit to Cuba? "

Unless, perhaps, that the cigars he smelled during his recent visit to the COHIBA cigars factory in Cuba had been too strong for him?