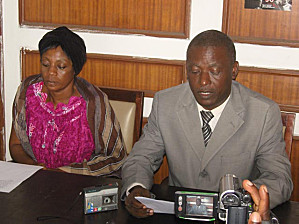 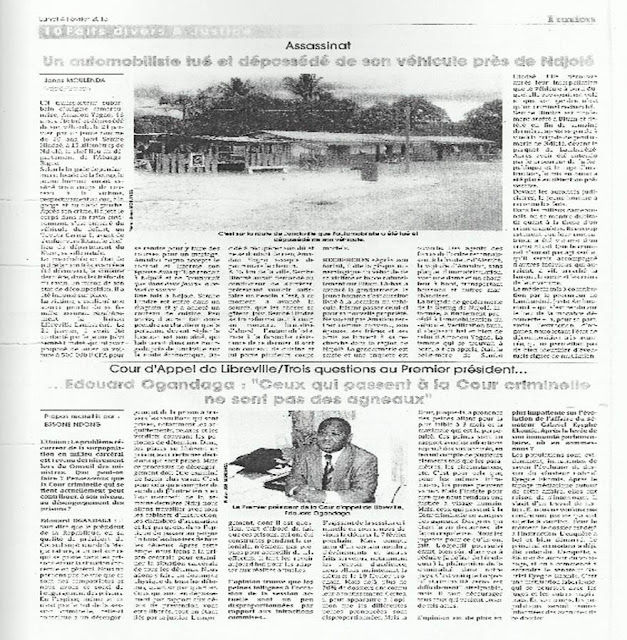 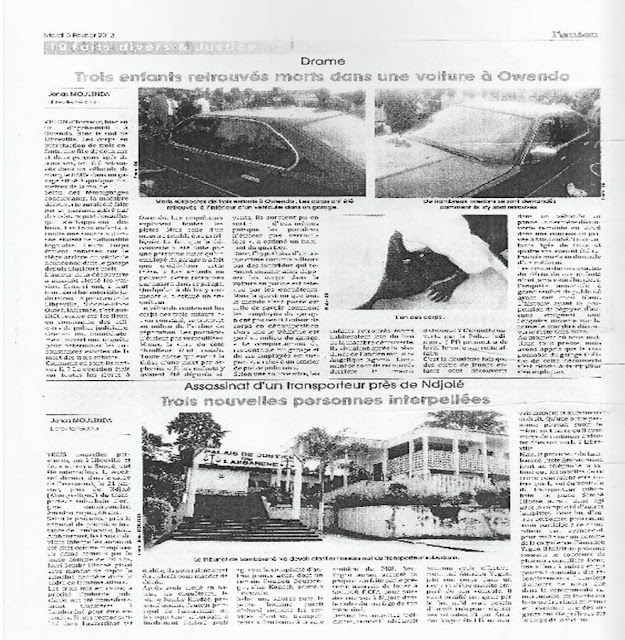 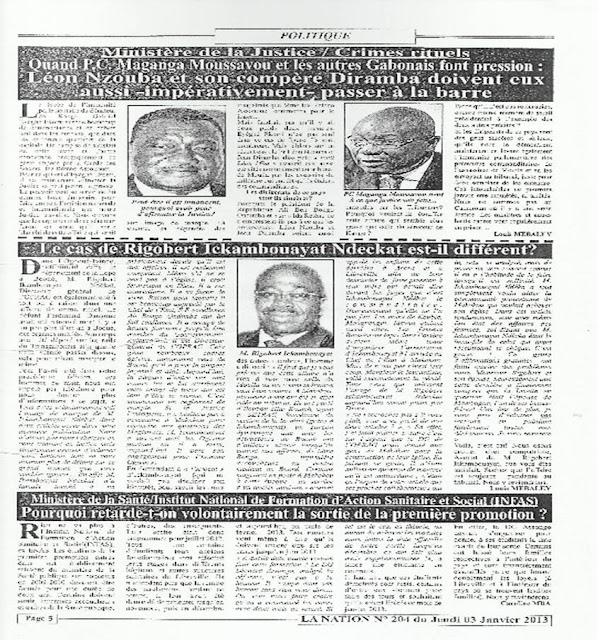 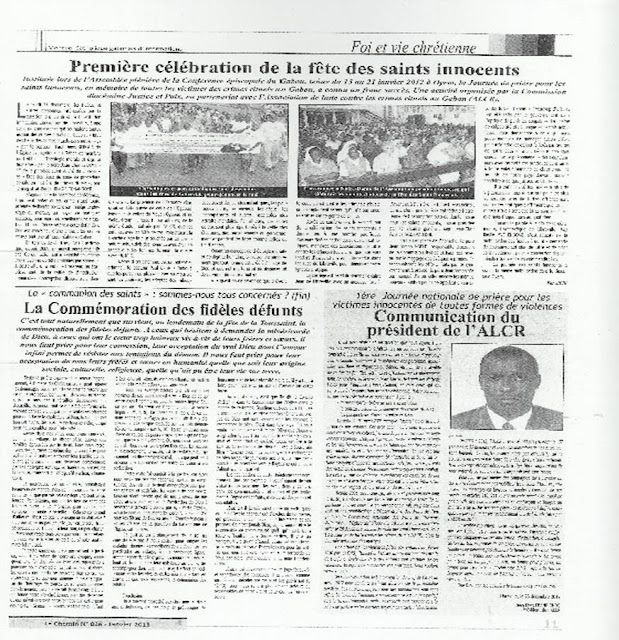 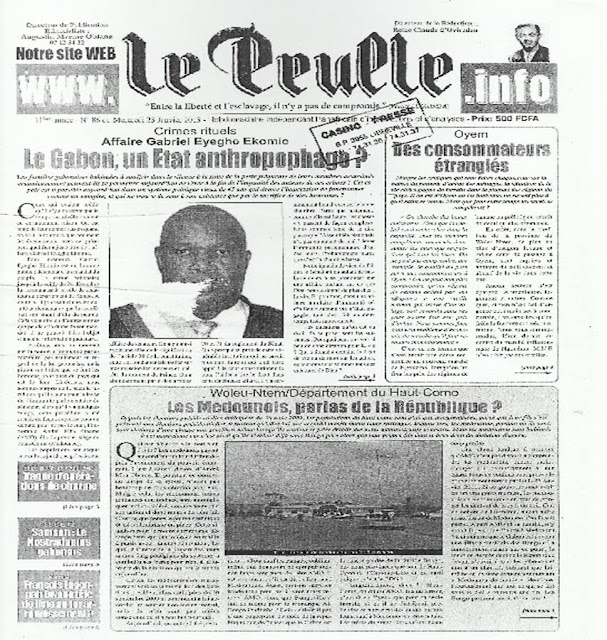 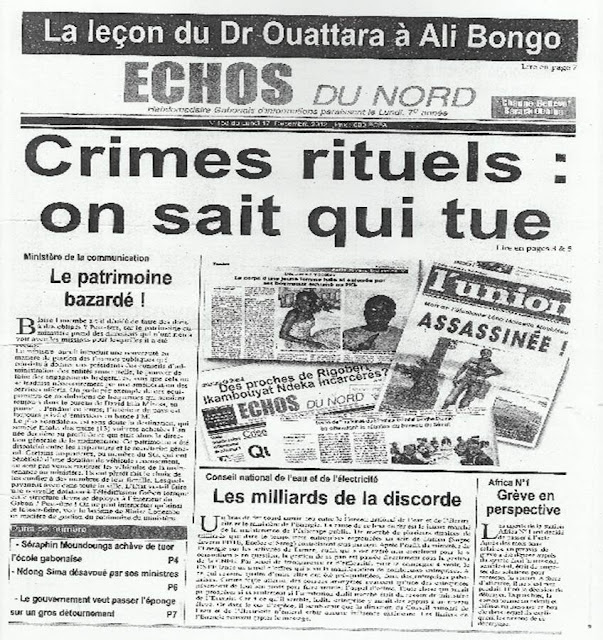 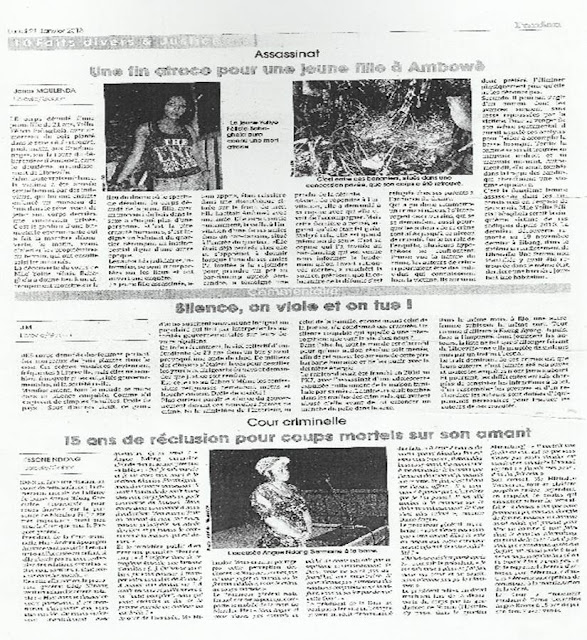 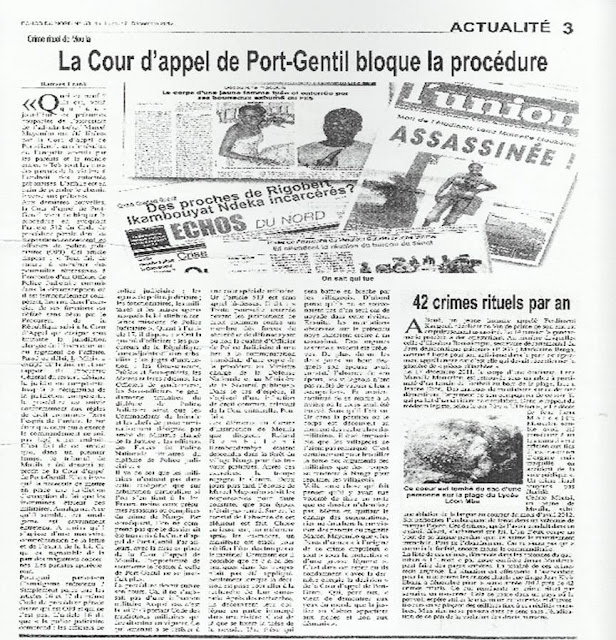 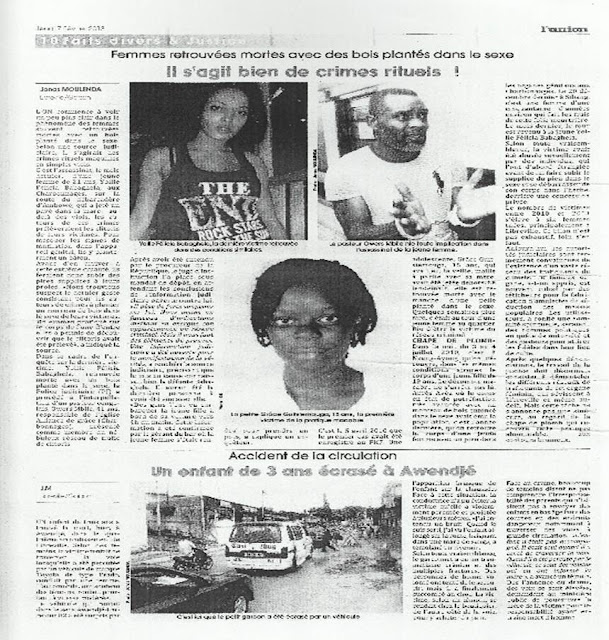 This press release was published by Mr. Jean Elvis Ebang Ondo, President of the Association for the Fight against Ritual Crimes (ALCR) in Gabon, on March 13, 2013 in Geneva, Switzerland.

Association of Fight Against Ritual Crimes

GABON: Communication from the President of the ALCR to the Universal Periodic Review

Thank you for the invitation and also for the platform opened to me at this meeting, to deliver this communication to express to you our concerns regarding the work done in the fight against ritual crimes. This report will focus much more on the right to life which is neglected in our country. Gabon promises and voluntarily makes commitments to respect human rights, but these are not specific, measurable and verifiable. Gabon was elected on November 12, 2012 to the Council of Human Rights of the United Nations and is holding that seat since January 1, 2013, for a term of three years.

The ALCR as a NGOs has the right to submit information on the situation of human rights in Gabon to the UPR, although excluded and victimized with many injustices by the current system in power because of its humanitarian campaign: fight against cannibalism. It must ensure the implementation of the UPR recommendations, participate in national consultations organized by Gabon and finally speak to the Council of Human Rights during the adoption of this current report submitted by Gabon.

In our country, a popular adage says: "kill, steal and murder and promotions await you" Yet, Gabon which has only 1.5 million inhabitants, has ratified and signed several international conventions and treaties. What would be the contribution of Gabon in this council if it does not respect the right to life?

"In some areas of Africa and particularly in Central Africa, children and even adults continue to disappear without a trace or be recovered in the form of mutilated corpses, which shows that this is in most cases: Ritual Crimes," Proceedings of the Regional Symposium of UNESCO on Ritual Crimes of Libreville, 19-20 July 2005.

The followers of these practices recover the vital organs of the victim still alive, called "spare parts" (sex, ears, tongue, eyes, ears, heart, kidneys, blood, flesh and skin) and deliver them to the sponsors who consume the ‘body meats’. The blood removed in drunk in temples. These body parts are supposed to offer: youth, health, wealth, promotion, success and especially honor and power. Children and women are the main victims. Lawless, these are secret networks. They have a calamitous mismanagement of the country's assets and act with impunity, corruption, tribalism, solidarity, they form an ecclesiastical aristocracy. Gabon becomes the kingdom of abominations, the most cynical country of the sub region of Central Africa: crimes, desecration of graves, disappearances, cannibalism and witchcraft. This communication will focus on three points.

- The brief presentation of our Association;

- The current phenomenon of ritual crimes;

- The prospects against this scourge.

* The date of March 3, 2005, marks the killing and maiming of our children. This abominable act led us to constitute ourselves as a collective first, then in an association legally recognized since June 16, 2006. The main objective remains the same: to defend human lives by breaking the taboo that inhabits the vulnerable and the fight against impunity. Life is a divine grace no community authorizes its trivialization. We try to provide forms of support to the families of victims, to conduct educational missions to combat this form of violence, to strengthen the capacity of our members to attend national and international meetings on the respect and protection of the right to life.

With courage, professionalism and perseverance in the fight, the Embassy of the United States of America works in partnership with us. The Government has set up two republican institutions: the Observatory of Children's Rights and the National Commission on Human Rights. The Catholic Church supports us, and has retained on its calendar each year, December 28th as the Day of the Holy Innocents or in memory of innocent people murdered in Gabon. The ALCR is a force for critics and proposals.

* A monitoring – evaluation- of the intervention of the Head of State in April 2012, brings us to a disappointment because the phenomenon persists. Some leaders of republican institutions responsible for proposing, voting enforce the laws substitute themselves to civil society to come and denounce this scourge to put the people to sleep and entertain them, the announcement effects. Other administration officials are conducting publicized conferences and meetings to justify the recommendations made in Geneva in November 2012 by the Commission. They block our activities and exclude us although elected in some institutions.

There is no revision of the penal code, no change of mentality, impunity remains. Other actions and events (peaceful marches, media messages in local languages in state media and complaints) are without effect. The lifting of the parliamentary immunity of a senator from the ruling party in December 24, 2012 remains ineffective. All eyes are turned to the justice system which plays overtime and where the dossiers of ritual crimes are never fully examined.

From 1 January 2013 until 6 March 2013, ALCR identified 13 cases of victims, and the sponsors remain unpunished. Stop shedding the blood of innocents. Thou shalt not kill! The figure is far from accurate since our structure does not cover the entire national territory. Yesterday bodies were discovered in the open air, now they are buried everywhere, some bodies disappear without a trace.

Some bodies are buried without head, heart, cut to pieces as this Cameroonian killed in Ndjolé leaving behind 17 children. Other networks are raping and murdering girls by putting pieces of wood in their sex after the act. Finally, little children found dead in cars and or houses. These murders disguised as fire are never elucidated.

The ritual crimes are institutional crimes in Gabon (in the majority of institutions, sponsors very supportive of each other’s, hide and are indexed by the population).

In addition, some esoteric-religious movements are not well appreciated by the people because, for them, they are at the origin of infanticide among us.

* Given the trivialization with which the Gabonese authorities treat human beings, the impunity of these criminal networks and to bring forward this dossier of human rights and wanting to protect the right to life, the ALCR wants to put an end to this well organized and supported genocide.

We seeks to work with Amnesty International and the Government to identify all cases of ritual crimes committed in Gabon since 2000, to facilitate judicial procedures, support the victims' families, within the Council of Human Rights of United Nations until 2015.

We solicit a formal hearing with the Special Rapporteur on the right to education, who is currently asking for permission to visit Gabon. A meeting to share experiences with her and asked experts from friendly countries victim of this scourge. She wants the establishment of a special tribunal to prosecute all cases of ritual murders.

To the Council of Human Rights of The United Nations (UN) we ask that they recommend to the Gabonese authorities to apply and enforce agreements, conventions, protocols and other instruments ratified by Gabon.

This phenomenon constitutes a threat against humanity that the United Nations must address. I ask the international community to come touch this reality, to support us, to protect us and put pressure on the Gabonese government to release the politicized justice system, to respect and uphold its obligations to protect the right to life.