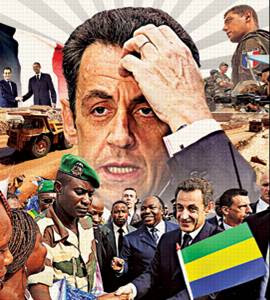 They say the old habits will end. Really?

WHEN France’s president, Nicolas Sarkozy, first took office he treated Africa chiefly in terms of visas, immigration and security. When he was the interior minister, those were his main dealings with it. Unlike his predecessor, Jacques Chirac, he was not naturally drawn to the continent or its culture. In his first three years, Mr Sarkozy did not hold a single France-Africa summit. He once declared that “economically, France does not need Africa.”
So why did he ask 38 African heads of state and government to a jamboree in Nice this week? One reason is the 50th anniversary this year of the granting of independence by France to 14 of its former sub-Saharan colonies. As a mark of respect, African troops will march beside French ones in the July 14th Bastille Day parade in Paris. Another is Mr Sarkozy’s effort to promote Africa on the world stage. In Nice he said the absence of a permanent African seat on the UN Security Council was “absolutely abnormal”.
Above all, though, France has belatedly realised that, while it has gradually retreated, the Chinese, Indians and others have trampled straight into its backyard. Even in French-speaking parts, French firms are being squeezed by competition from Chinese and Indian business, for commodities as well as infrastructure projects, at a time when the region’s economy has begun to grow fast. China has now overtaken France as sub-Saharan Africa’s leading trading partner. Hence the 200-odd businessmen whom Mr Sarkozy invited to Nice, a first for this sort of summit. Hence also the presence there of English-speaking leaders, notably South Africa’s Jacob Zuma, who was treated to a gastronomic lunch à deux, and Nigeria’s Goodluck Jonathan.
Whether Mr Sarkozy can promote French firms without returning to the bad old ways of françafrique—that web of influence, soldier-rulers and petro-dollars—remains to be seen. He says he wants to turn the page and make dealings in Africa more open. Yet the French establishment may not be so sure. A preliminary French judicial investigation into a case brought against three African leaders by Transparency International, a Berlin-based anti-corruption lobby, showed that one of them and his family owned 39 properties in France. Last October, however, a French appeals court rejected the case. The leader in question was Gabon’s Omar Bongo, now deceased; happily his son, Ali, took over.