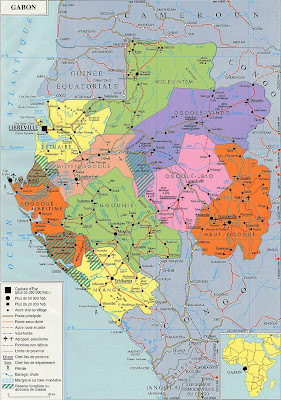 RE: July 16 Protest at State Department and White House: Gabonese Community in the United States asks Hillary Clinton to Renounce and Revoke Her Words of Support to the 43-Year-Old Bongo Dictatorship in Gabon

This letter is to inform you that the Gabonese community residing in the United States is planning a demonstration at both the State Department and the White House on Friday, July 16 beginning at 10:00am.

During Madam Secretary of State’s joint press conference with the Gabonese dictator at the State Department on March 8, 2010, the Gabonese community in the United States as well as the Gabonese people both within Gabon and around the world were not only deeply outraged and troubled, but also profoundly disappointed and saddened by the words of support Mrs. Clinton conveyed to dictator Ali Bongo Ondimba when she expressed confidence in his ability to diversify Gabon’s economy, create new opportunity for its people, improve government efficiency, eliminate waste, fight corruption, widen the circle of prosperity, promote democracy and end human trafficking, something this regime has not been able to do in 43 years of corruption and criminality.

We find Hillary Clinton’s statements and assertions of support for a 43-year-old corrupt and despotic regime very problematic, and we profoundly disagree.
We are therefore protesting Hillary Clinton’s words of support to the 43-year-old Bongo dictatorship in Gabon. We are also respectfully asking that she revokes and renounces her words. It is our opinion that her blunt and enthusiastic words of support to the Gabonese dictator not only showed poor judgment, but may have equally, in fact, caused irreparable harm to any prospect of Gabon ever engaging on a path to real and sustainable democracy.

Please find attached the letter we are sending Madam Secretary of State requesting that she revokes and renounces her words of support to the 43-year-old regime of the Bongo family in Gabon.

We are also seeking your support in pressuring and asking Secretary of State Hillary Clinton to revoke and renounce her words as we believe it is time she stood for an America that upholds true democratic values and principles around the world. We ask that she took the engagement, right now, and henceforth, to refuse Ali Bongo the honor of any further official visit to the United States. The dictator should be declared persona non grata and banned from ever meeting again with any U.S. official, including the President of the United States, until such time as Gabon is returned back to, at least, the 1991 Constitution, and free and fair elections are held that will bring to power a legitimate president chosen and trusted by the people. This is especially important as you are currently planning an August meeting with African presidents. Ali Bongo should not be invited.

Mr. President:
As far as we know, despite Gabon having one of the highest per-capita incomes in Africa as an oil-rich country with just over a million people, an income which the CIA World Factbook rates at close to $14,000 (many times higher than those of China and India), 60% of its people still live under the poverty line. Worse, the country lacks basic infrastructure in the form of decent hospitals and roads, basic medical service to the people is inexistent and one in ten children does not live beyond his/her fifth birthday. Meanwhile, the Bongo family owns 39 properties in France worth $200 million, including 70 bank accounts and million-dollar collection automobiles. This is in France alone. And as if this were not enough, Ali Bongo as recently as May 2010 acquired a private luxury hotel in Paris valued at 100 million Euros ($123 million).

We are surprised that Hillary Clinton chose to ignore the fact that in its very own annual reports on Human Rights in Gabon, the State Department’s own Web site has consistently described Gabon as a country “dominated by a strong presidency and the Gabonese Democratic Party (PDG), which has held power since 1968.” The reports have further described the country as one in which the “human rights record remained poor,» with “limited ability of citizens to change their government; use of excessive force, including torture toward prisoners and detainees; harsh prison conditions; arbitrary arrest and detention; an inefficient judiciary susceptible to government influence; restrictions on the right to privacy; restrictions on freedom of speech, press, association, and movement; harassment of refugees; widespread government corruption; violence and societal discrimination against women, persons with HIV/AIDS, and noncitizen Africans; trafficking in persons, particularly children; and forced labor and child labor.”
We are also surprised that she chose to ignore the very recent findings by the United States Senate’s Permanent Subcommittee on Investigations which implicated Ali Bongo in various corruption scandals. The U.S. Senate’s February 2010 report is not mincing its words when it describes Ali Bongo and his deceased father in the following terms: “Omar Bongo, President of Gabon for 41 years until his death last year, and his eldest son, Ali Bongo, Minister of Defense until he took his father’s place as President of the country […] are notorious for accumulating massive wealth while in office in a country known for poverty.” The system of corruption and money laundering which Ali Bongo inherited when his father died on June 8, 2009 is still pretty much intact.

Mr. President, we object to any attempt to find inhumane practices acceptable simply because “it is Africa.” If human right abuses and the fact that a president should stay in power for 42 years are behaviors that are unacceptable to the people of the United States, then such practices should be considered unacceptable in Africa as well. Democracy should not be a matter of negotiation or choice. It should be the rule, even in Africa.

As you yourself proclaimed during your July 2009 visit to Ghana, “Africa doesn’t need strongmen, it needs strong institutions.” Gabon’s institutions do not exist. They are all subject to the rule and dictate of one man. This must change and we ask that Hillary Clinton honor your 2009 appeal for democracy and progress in Africa.