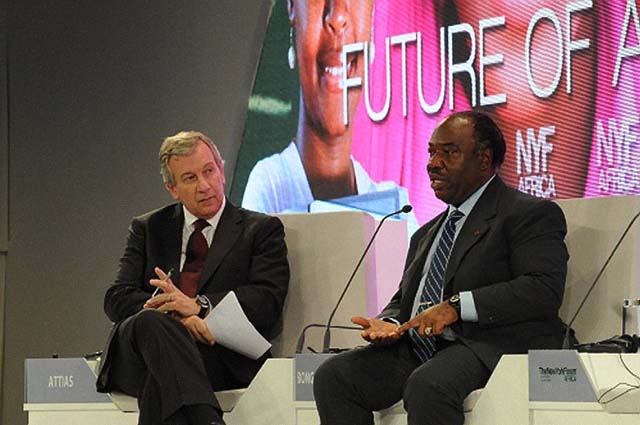 Richard Attias, Ali Bongo’s impressario and organiser of the ridiculous New York Forum Africa which is going to take place in the middle of an ongoing epidemic of ritual crimes in Gabon, has just written an equally ridiculous open letter to the Gabonese free civil society; asking them, between the lines, to be more understanding of his intention.

This is a letter from a desperate man. From a man who sees his house of cards about to crumble. A man who is trying to salvage his rotten forum which the Gabonese people can do without. It has been a long time since your humble servant had read such a pile of steaming bullshit. The free civil society will answer him in kind; but for the moment, we publish below his open letter printed in the Gabonese press.

The New York Forum Africa platform is without a doubt a boon allowing you to attempt to give an echo to, but without any real impact I am afraid, your criticisms and challenges.

You give however an additional proof and you would implicitly acknowledge it, that our international community is influential and of high morality.

That you personally call me out as you did recently is of the order of things. That you defame my spouse does not elevate you. It is however to ignore the actions of her foundation on behalf of African women.

But in life some people chose the pathway of backbiting and inelegance. They live and feed only on the criticism of those who labor, are enterprising and succeed in struggles which are more exiting and honorable.

You have also chosen to use particular media platforms to publish calumnious things and to affirm un-truths.

The mission of the New York Forum, since its creation, is to boost growth and allow the creation of jobs thanks to investments.

That mission is pursued without any political consideration or personal motivation.
We have been carrying it with conviction, passion and obstinacy, for more than 20 years now, on all continents using multiple platforms and particularly in Africa.

The New York Forum, has, however, for every one of its edition, obtained the support and the engaging presence of hundreds of personalities known for economics, politics, Nobel Prizes, academia, journalism, sociology, founding NGOs, all convinced that our mission is important, useful and necessary.

The White House even decided in 2011 to send Obama’s job council to a special session.

Your country, Gabon, is a magnificent country that has taken the initiative to be the host of this illustrious assembly which attends to the issues challenges facing our continent. From these exchanges, these sharing of experiences, wills are born, investment decisions are made, but also and more importantly solutions to problems are found by those who are in a framework of intellectually honesty and positive and constructive critical thinking.

The 2012 edition of the New York Forum Africa permitted to initiate several development projects, many of which will be launched in the coming weeks; not to speak of the many sectors of the local economy which benefit from this event and its dividends.

The 2013 edition will be even higher given the enthusiasm of investors and international operators for Gabon which is a true regional platform. This reminds me of the attractiveness of my country, Morrocco, when we organize these kinds of conferences.

I am glad that a number of small businesses would participate.

I have personally always followed the “Occupy” movement in Europe, New York, and North Africa. Only those which have expressed themselves without violence, in a positive and constructive spirit, and without personal agenda, have been able to make themselves relevant and respected.

The issue today is no longer to be against some initiatives, to attempt to isolate your country or to give it a negative image.
The true challenge is to find solutions to problems faced by all societies today. In that spirit, I have proposed to you publically on the 10th of May, to come participate to an objective debate. That invitation has remained without an answer.

I am reiterating it to you. But you will not make of that debate a political platform. It is not and will never be the New York Forum Africa’s vocation.

If you refuse, I would understand along with all the participants to the Forum, that your struggle and your intentions and objectives are elsewhere.
Gabon and Africa are writing a new page of their history and everybody must participate, with their convictions, freely and in a constructive spirit of solidarity.
But above all, we must show to our international guests, we as Africans that we are deserving of their confidence. 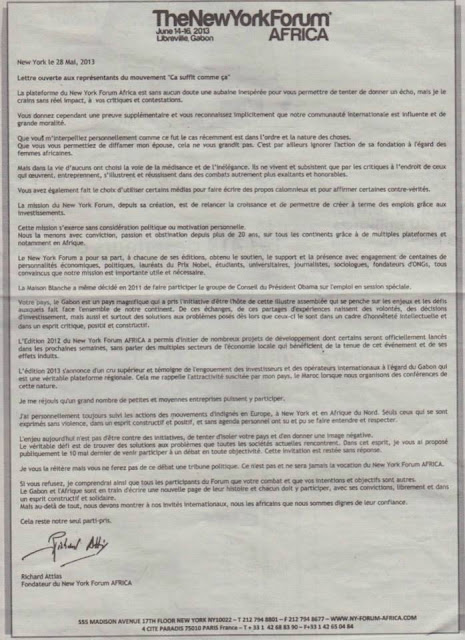