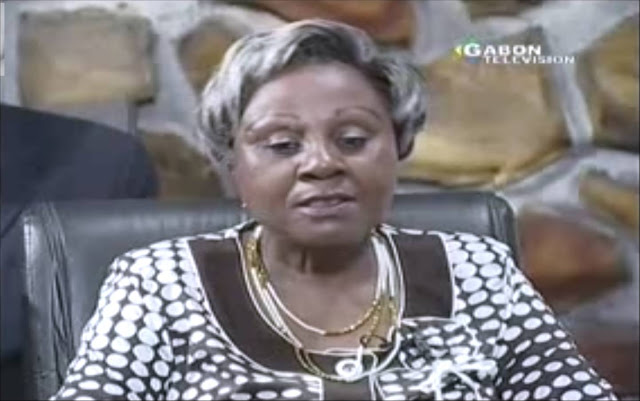 Where does the violence come from, the regime or the opposition?

The first question from the moderator of the program Agora, Hasse Nziengui, was as follows:

To this question, Mrs. Maganga Moussavou answered by expressing her surprise that the small incident of Mr. Mayila was front page news, when it is know that there are many acts of violence deserving to be noticed that are never mentioned. Violence always has an origin, one does not become violent unnecessarily, there is always a cause. Is it frustration? Is it a lack of understanding? She asked everyone to find out why there is such violence. She also reminded the audience that at the foundation of the UFC in Mouila, Louis Gaston Mayila was appointed to chair that meeting and he has for vice president, Zachary Myboto. He knew well that Zachary Myboto was a representative of the Union Nationale. It was therefore surprising that the participation of Zachary Myboto to the meeting of Rio presented problems to Louis Gaston Mayila, especially since all parties knew that Myboto and other representatives of the Union Nationale would be there; this had been decided. She then went on to say that violence has always a cause. It is born of injustice, of a certain weariness of the fact that the real issues are never addressed in Gabon. Instead, secondary problems are always approached without seeking the root cause.

Mrs. Denise Mekamne answers the same question by saying that the violence of the 90s are not those of today, and if those in the 90s were related to certain facts, today's violence is not justified. She says that whatever the reasons, in a country ruled by laws, there should not find excuses for violence. Regarding Mayila, she believes that regardless of what he could have done, there was no reason to push him around. For her, today violence should not be an argument for anything. Democratic debate cannot be founded upon violence.

For the Mayor of Owendo, Mrs. Jeanne Mbagou, the answer was that she does not want the political problems to be transformed into violence in the public place, because politics is a debate of ideas and Gabon since 1990 has experienced violence that have yielded no results. At that time, the late president, she says, convened a National Conference which led to multiparty democracy. She then jumps to the Mayila case, deploring the regrettable scenes which saw Mayila treated as less than nothing. She condemns that violence that has no reason to occur in Gabon.

Responding to the same question, Mrs Monique Oyane-Ondo states that violent people are not always whom people think. History shows that it is those who have the means of force, who always say that others are violent. She gives examples such as members of French Resistance who were treated as terrorists during World War II and Nelson Mandela, who was also called a terrorist. For Mrs. Oyane, violence is a matter of perspective insofar as it is always the people who have the means, who are the strongest at the moment, who treat others as being violent. She maintains that in Gabon, it is the state that is violent not the opposition. She gives as an example, the fact that she was a victim of the Gabonese state violence when they sent 300 gendarmes to her village, to vandalize her home and desecrate her father's grave. She goes on to say that there are Gabonese incarcerated today because they are suspected of having wanted to participate to an event, an act of public liberty, a fundamental right, but the event in question did not take place and these people were still arrested. She concludes that this is clearly a case of state violence. She adds that a state that dissolves political parties is a violent state. Ms. Oyane explained later that, given the monopoly of the state of Gabon in the dissemination of information, the state is trying to make the opposition appears violent when it is the state that is violent.

Having listened to all the responses given by all 4 participants to this TV program, the first impression of this blog is that this is a very complex question that requires serious thoughts in order to determine under what conditions, if any, violent action may be said to be "legitimate". This is not a question that can be answered in a superficial manner. This kind of question cannot be answered in a meaningful way when it is abstracted from the context of particular concrete circumstances. This is why this blog finds the response of Mrs. Denise Mekamne to be unsatisfactory when she said that under no circumstances is violence unacceptable. She cannot be taken seriously because her own government that she supports uses violence all the time against civilian and she has never complained about these act of violence. So she must not be totally against violence. Of course, any rational person would agree that violence is not legitimate unless the consequences of such action are to eliminate a greater evil. Therefore, when Mrs Mekamne says that under no conceivable circumstances should violence ever be justified, she makes a factual assumption that is certainly false. This blog cannot therefore accept a general and absolute opposition to violence, because against the evil of oppression, people yearning to be free have the right to resort to violence when all else has failed.

Mrs Mekamne position is absurd given the fact that she refuses to examine the role of her government in creating the conditions for political violence to take place in Gabon. In selectively choosing the incident involving Mr Mayila, she is decidedly one sided in her outrage against political violence. As Mrs. Maganga Moussavou and Mrs. Paulette Oyane Ondo have reminded her, there are circumstances of state sponsor violence in Gabon that are never address and Mrs. Mekamne as a legislator has never been heard condemning these acts. This blog can then conclude that Mrs Mekamne seems to accept the violence conducted by the state against the opposition, but condemns the acts of violence the opposition might undertake against an oppressor state. In this case, Mrs. Mekamne's indignation can only be qualified as disingenuous. Naturally, the easiest reaction is to say that all violence is abhorrent, that both sides are guilty, and to stand apart retaining one's moral purity and condemn them both. But unfortunately neither Mrs. Mekamne nor Mrs. Mbagou have neutral views or are even neutral observers of Gabonese politics They are card carrying members of the PDG and vocal supporters of Ali Bongo and as such, they are saying no to violence only when the opposition is under the lens.

In fact, when faced with a repressive regime such as the one in Gabon, the people can be justified in the use of specific and targeted use of violence against those who are oppressing them. This has the potential to free the population from its fear complex and permits it to enter into political life. This could release the Gabonese people from their role of passivity into a more and robust active role in their liberation. This has the potential to show the Gabonese people that they could take over the country. This could be the mechanism necessary to break the bonds of passivity that made continue to make the Gabonese people totally incapable of meaningful political action. And if targeted violence does move the populace to the point where it can overcome the sort of permanent bondage of the sort that exists today in Gabon, then this blog is for it. There are several historical examples that a people that decides to stand up for itself usually becomes free while those who accept their fate remain in bondage.