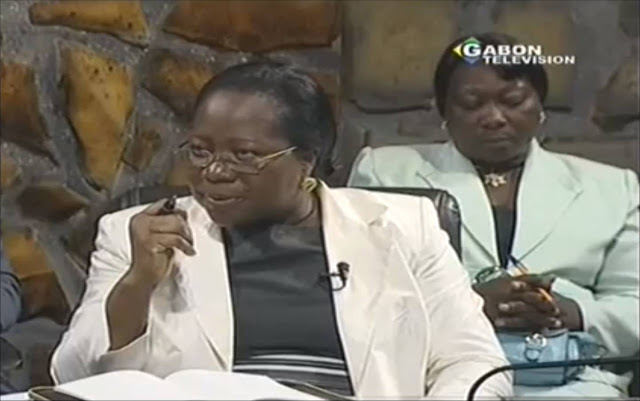 The importance of debate in a democracy

In the last half hour of the program Agora, Mrs. Paulette Oyane Ondo said:

"The debate that we are having now proves one thing, it is that in Gabon there is no democracy. You know, the basis of democracy is dialogue. If it is even being said that we cannot have a national conference because there is no political crisis, it means that we are not even in a democracy. I'll take a case like François Hollande. As soon as he took office, he immediately made contact with the unions, yet there were no problems. He entered into dialogue with all segments of the population and created a commission for just about every theme, because he is a Democrat. When we are told that there is no political crisis, what do we mean by crisis? They themselves are saying that we must recognize their champion as president; it means that they themselves have a problem with that! Is there a crisis only when blood flows? Democracy is what we are doing here, someone wants to talk, we will give them the floor ... So even discussing the Sovereign National Conference proves that Gabon is not a democracy. For alternating political regimes to take place, there must be a neutral state; the state should not be partisan. But in Gabon, even a Secretary in a service considers that insofar as she was appointed to the service, she must protect her job by pleasing the people in power. The state is not neutral in Gabon it is personified and even personalized. This is not a state that believes that it is the general agent of all Gabonese."

"Never has the regime insulted the opposition; that has never seen ... We're not here to judge the state! This is not a case here against the state but we are talking about political violence."

To what Mrs. Maganga Moussavou responded by telling her how the PDG sent youths to Mouila to disrupt the meeting of the UFC. Once again the Mayor of Owendo found herself in the mud.

Ms. Mekamne enters the dance by saying that:

"Intolerance is to not recognize that someone has been elected for 7 years. He must be allowed to work during these 7 years in peace. It is not a group of individuals who will decide one morning to conduct a Sovereign National Conference; according to the constitution, the sovereignty belongs to the people. It is stated in the constitution that no group of people can claim sovereignty. Those who demand the Sovereign National Conference, do they have the power of the people? People send their representatives to the parliament. The people give their power through elections. The president was elected by the people, the MPs. were elected by the people, they are the representative of the people. Institutions work well, we're not going to question them every 20 years. "

The Agora program we are commenting since the beginning of the week is certainly the most important that this blog ever watched and analyzed. Most important because of the extent of the subject matter covered and also because of the quality of the speakers who have allowed the audience to measure, if they were still doubtful, the tectonic drift of ideas between supporters and advocates of the established order and those who want Gabon to change and enter the 21st century and the era of democracy. Even Jeanne Mbagou, within her limits, has attracted the sympathy of our readers, who have written a lot saying, "but what do you want from her when she owes everything to the Bongo? Without the Bongos, she is nothing, she must be understood." The four ladies present at this debate personified the divide between those in Gabon who are not bothered by a burgeoning arbitrary and mediocre monarchy and those for whom it would be time for a republican ideal of governance, institutions and practices replace the archaic despotically ubiquitous family that has been ruling Gabon for 45 years.

The two paths going in opposite directions, we have seen ladies Maganga Moussavou and Oyane Ondo demonstrate and ask that Gabon becomes a country administered through the greater participation of citizens in public affairs and in all forms of governance. This evolution which is commonly called "democracy" would be the best guarantee for protection of fundamental freedoms, equality between citizens and response to the needs of all people and the preservation of long-term peace in the country. These interveners brilliantly defended the belief that the ultimate goal of democracy is to preserve and promote the dignity and fundamental rights of the individual, to achieve social justice in the country, promote economic and social development of the community, strengthen social cohesion and create an environment conducive to peace. For them, democracy, development and human rights are therefore interdependent.

At the opposite, ladies Mekamne and Mbagou also demonstrated their commitment to the existing order, even to the point of absurdity as when one stated that there was no problem in Gabon, but more insidiously the one who was university educated and a lawyer tried to normalized the arbitrary and despotic gangrene affecting Gabon, as long as "the head of state was elected" and that "institutions functioned normally." If the childlike reasoning of Mrs. Mbagou could make you smile, the cynical calculations of Mrs. Mekamne are more disconcerting because she was rejecting outright any suggestion of national dialogue on Gabon's governance and denying the entire Gabonese people the opportunity to exercise control over the rules and policy governing the country under the pretext that "institutions are work" so people can move on because there is nothing to see. Ms. Mekamne pushes it further by saying that none other than members of parliament have the right to speak on behalf of the Gabonese people, because only these parliamentarians are constitutionally vested with public representation. But Ms. Mekamne knows very well that the Gabonese Parliament does not meet any of the parameters that make such an institution representative of the people in all its diversity. In saying this, Mrs. Mekamne, in fact, expressed her approval for a 2 tier Gabon: the PDG which arrogates to hitself the right to speech and dialogue, and others who suffer. There is the Gabon that they want to sustain.

Debate is important in a democracy because it allows every citizen having a capacity for reflection to get an idea on those who govern and where they want to lead the country. The debate that took place in Agora was a rare democratic debate in a country that is not so. We witnessed the ideological clash between the established order which would continue to marginalize people by confining them to the outskirts of the state and leaving the management of the country to the monarch and his "functioning institutions" and other citizens wishing to consolidate the Gabonese state and give it a new birth from which could come out a more transparent electoral process; more present political rights and civil liberties and defined roles and responsibilities of each other in a democratic system clearly established.

It is to decide between these two camps that a Sovereign National Conference is not only necessary but also indispensable for Gabon. That debate program, Agora, allowed Gabonese people to know the implications of this Sovereign National Conference. The refusal of the regime to engage in this dialogue between political parties, the civil society and all citizens, speaks volumes about the regime's intentions for the country.