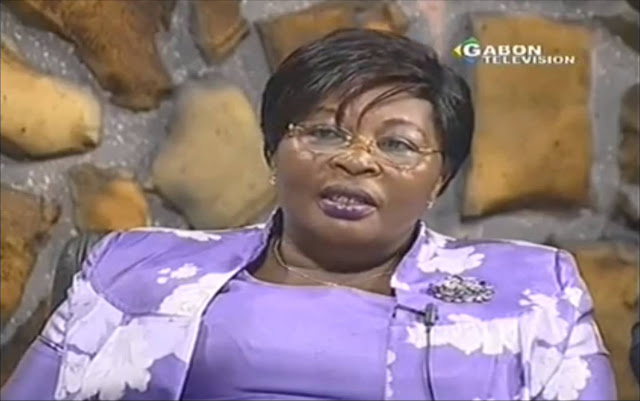 For Mme Jeanne Mbagou, there are no problems in Gabon!

During the program Agora, Mrs. Jeanne Mbagou said the following:

"Democracy is not synonymous with disobedience, democracy is not synonymous with destruction ... The president was elected and after that election, he reached out to everyone. Unfortunately many did not seize the extended hand and all they did was to slander him... This situation is like when you have a son who does not respect his father, the latter cannot sit down with him to discuss anything ... Today when they say that there are problems in Gabon, I do not see where there are problems. There is no problem, you look at the institutions, they are definitely there! The institutions operate, the people are going about their business, when there are health problems, people get care. The schools are working. You see, it is the politicians who want the Gabonese and international community to believe that there are problems; specifically the opposition creates this situation ... The School year just started; are the schools not open? CNAMGS You know, I'm the mayor of Owendo and I see what is happening, there are distributing cards and pension securities right now ... So what is the problem referred to by the opposition when it says that there is a problem in Gabon, there is a crisis in Gabon?"

Totally stunned and visibly shocked by what had just been said by the Mayor of Owendo, Mrs. Maganga Moussavou took the audience for witness by saying the following: "do you realize what the Mayor just said? She is saying that all is well, that Gabon is an idyllic country, an Eden, the paradise. While it is not the case. Intellectual honesty would prevent you from ever saying that everything works well, it is not possible ... the fact that you say the opposition is responsible for creating problems, means that you do the ostrich, you put your head in the sand and deny reality ... the country does not work well, I'm sorry. When you have classes overcrowded with children who find it difficult to learn, we must recognize that things are not well..."

Wishing to save face and get her sidekick out of the ditch in which she sank, Mrs Mekamne recognized that there are many things yet to be done in Gabon. But nevertheless also wanted to pull the cover to her side by saying that things are being done and that if the opposition believed that the country was not well, it would present its programs that provide alternatives to current state.

Speaking afterwards, Mrs Oyane Ondo reminded the Mayor of Owendo that in Gabon, which she thinks that all works well, each year there are 500 women who die of complications during childbirth. Before hitting the nail by adding that in a country where people live well, there are not many death during childbirth, at least not in the proportions existing in Gabon. Mrs. Oyane Ondo subsequently informed the mayor of Owendo that life expectancy in Gabon was 52 years and was well below the observed life expectancy in countries where people live well. Life expectancy of 52 years indicates that Gabon does not have a good quality of life and health care is not doing well either.

The first thing this blog would like to say is that we will not take the easy road and attack the mayor of Owendo, because we believe that Mrs Maganga Moussavou and Mrs Oyane Ondo already demonstrated during the program just how ridiculous and absurd her statement about Gabon not having any problem was. What this blog would like to examine is the fact that someone like Jeanne Mbagou can be invited to such a debate and even worse, that someone like her can be the mayor of a large suburb like Owendo.

It is sad to say and we hope that our readers will understand that we are not here to disrespect Mrs. Mbagou. But she did not deserve to be at that debate. She was way too limited in her reasoning and did not display any cognitive capacity susceptible to allow her to contribute any intelligent thoughts to the debate. While other participants tried to elevate the debate, Mrs. Mbagou consistently brought it down by speaking in general platitudes. That such a TV program invited her is very curious because the responsible of the program must have known who she was and who she would be debating. To have 3 university educated professionals debate with a person who seems to come from nowhere is not doing a favor to that person because her weaknesses would be exposed for all to see and this is what happened to the Mayor of Owendo.

However, the real question this blog would like to ask is to know how somebody like Jeanne Mbagou can become Mayor of a large suburb in a country like Gabon? Unfortunately, Mrs. Mbagou personifies and reinforces the idea that the Bongo regime and the PDG party are dominated by people of dubious intellectual credentials and cognitive capacity. This helps explain why this regime and the ruling party have in their mode of functioning an anti intellectual attitude. Many people within the Ali Bongo cabinet, his government his trusted circles, are cut from the same cloth as Mrs. Jeanne Mbagou; in that they did not get where they are because of their brains. After listening to the series of idiocies pronounced by Mrs. Jeanne Mbagou, does anybody think that she can be an efficient Mayor? Does anybody think that that lady is capable to understand the planning and managing of a city?

More importantly, dear readers, could a country run by a collection of lousy students have a chance to be successful in the long run? What is this country where ignorance is celebrated and absurdly ignorant people are invited on television where they display their stupidity? Surely, Gabon can do better than that. Gabon deserves better than that. Because of the prominence of stupid people at the apex of the state, a disturbing trend has appeared in Gabon; a trend that devalues the merit of education because people can point to former rotten students and know-nothing individuals who have high state responsibilities. Case in point, the minister of Education is someone particularly undistinguished when it comes to education; how ironic.

The message the Bongo regime has always given to the Gabonese people is to not worry too much about working hard in school, because they can still reach powerful leadership positions thanks to their affinity or support for the Bongo family and heavy militancy within the PDG party. This is not a good example for young people in an increasingly competitive world. Mrs Mbagou is one example among many of the attitude of the people in power in Gabon; they know next to nothing but they insist that there are simple, brute-force, instant-gratification answers to every problem, and that anybody who dares to suggest otherwise is a dangerous subversive who must be incarcerated. The Bongo regime does not like to think things through, that's too hard. The PDG seems to have an allergy to reason and evidence, preferring to take refuge in empty slogans and blind loyalty. People like Ali Bongo and for that matter Jeanne Mbagou do not care what the statistics say about Gabon, they do not care what life expectancy is or what it indicates; they do not care about what economists, sociologist, historians, etc., have to say; for these members of the regime, the only things that matters is to stay in power and how to do that is the only information they need.

To sum it up, for members of this regime, there is no reason to know anything or show any intelligence when they feel that the truth, facts and evidence do not matter. Nothing matters to them: they steal elections, fabricate false curriculum vita and usurp everything. It doesn't matter if the Gabonese people suffer, it doesn't fit their world view and they don't care. The easiest way for them to solve problems is to pretend that they do not exist! Even Mrs. Jeanne Mbagou knows that!

To be continued. Next post: "The problem of Gabon is the impossibility of political change" says Paulette Oyane Ondo!