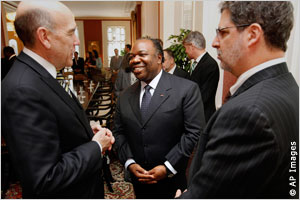 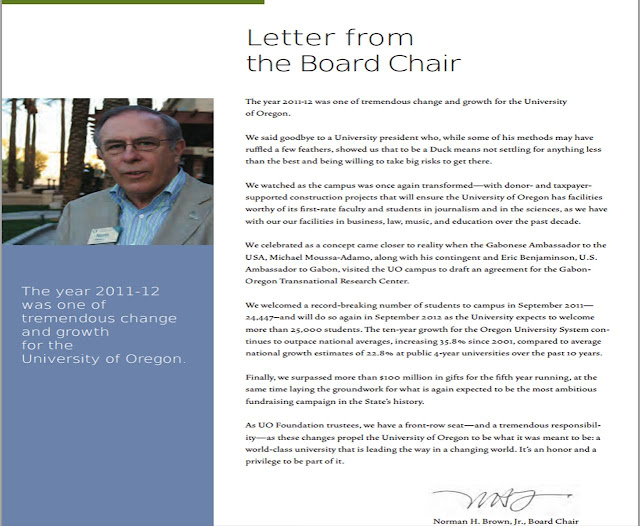 Two recently published articles on the site Gabonreview relating the views of the Ambassador of the United States of America to Gabon, Eric Benjaminson, lead us to take the time to thoroughly answer in two posts today and tomorrow, to lift the veil on what seems to be a series of fantasies distilled by the ambassador who is firmly being a shield for Ali Bongo, often at the expense of the verifiable and verified truth. This first post restores some verifiable and verified truths about the donation by Ali Bongo, and it is a donation and we will explain why, to the University of Oregon (UO) and the second post tomorrow will answer Benjaminson views on the political climate in Gabon.

"The first time we discussed this convention, was during the visit of President Ali Bongo at the White House in 2011. It was during this visit that a first draft document was signed.”

The analysis of Le Gabon Enervant/Annoying Gabon: Unless Gabonreview misapprehended the words of the Ambassador; it seems that Benjaminson wants us to believe that there is an intersection between the agreement of Ali Bongo and UO, and his visit to the White House. The two events are distinct and the signature of the Memorandum of Understanding between the two parties was done outside of any activity involving the White House, which was not in any way associated with this transaction. That should be clear now! But this confusion is not the most damning fact of the aforementioned Benjaminson sentence. The worst is when the Ambassador said that it was during the visit of Ali Bongo at the White House that this Agreement was discussed for the first time, we did not have much choice but unfortunately and vigorously assert here that Ambassador obscures the truth. Without any sugar coating, we can say that here the Ambassador is lying! Dear readers, the proof of this lie is found in the documents of the University of Oregon, in which several professors spoke against the partnership in question because of the history of corruption of the Bongo regimes in Gabon. These documents edify us on the fact that it is indeed the Ambassador Benjaminson who had functioned as an intermediary for the transaction between Ali Bongo and the University of Oregon. It is Ambassador Benjaminson who in June 10, 2011, when Ali Bongo met the delegation from the University of Oregon for the signing of the first agreement, acted as an intermediary between the Gabonese and the Oregonians. Photos are available to anyone who wants to verify and even the website of the State Department (U.S. Foreign Affairs) confirms that. So, Eric Benjaminson would have a very hard time trying to explain how he was able to mediate the signing of an agreement which he became aware of at the moment of its signature. No, do not make fun of Africans like that. Especially as the site of the State Department contains repeated statements held by Benjaminson about that agreement, these comments were collected at the time of the signing in Washington. How could he know the details of an agreement which he was unaware of until the day of the signature? Remember that this signing took place on the same day than the visit of Ali Bongo at the White House. This attempt by Benjaminson to exonerate himself in this transaction will only convince those who still choose to voluntarily play ostrich. Another proof of the tandem Benjaminson-Ali Bongo comes from the annual report of UO activities. Like any public institution in the developed countries, UO must publish each year an annual report of its activities, its resources, its benefits and expenses etc. It is in this annual report that a letter from the Chairman of the Board of Directors of the University, Norman H. Brown Jr., tells us that Eric Benjaminson, his wife visited the university, along with one of Ali Bongo henchmen, Michael Moussa, for on that occasion said the document, work on the agreement to be signed later. We show you the letter in question contained in the annual report, above. So dear readers, Eric Benjaminson not only acted as an intermediary, but he also worked on the content of this agreement and that cannot be denied because the evidence is too substantial and the lies too obvious and insulting for the Gabonese people.

On Gabonreview the following is written:

Mr. Benjaminson explains that this program was developed by a professor at the University of Oregon who had lived and taught for 15 years in Senegal, an anthropologist known in West Africa. "There were political problems in Senegal and the university has had to suspend this research program. It therefore sought another francophone country that may welcome this research project. (...) While my appointment was already official but I was still in the United States to prepare my arrival, the university contacted me to ask me if Gabon would be interested. I arrived in Gabon and as the office of the presidency had changed, it was with the Ministry of Higher Education that I spoke to submit the project and they were interested. Then, the negotiations took place directly between the Ministry of Higher Education and the University of Oregon. Since it is not a contract between the Government of the United States and that of Gabon but between a private university and a ministry, I did not have to intervene. I have played a facilitating role. "

The analysis of Le Gabon Enervant/Annoying Gabon: here is the most ridiculous argument that further discredits Eric Benjaminson. He wants us to believe that this program of a donation of $ 20 million was initially planned between Senegal and UO, but because of political insecurity in Senegal, UO had to fall back on Gabon. But in which Africa Eric Benjaminson thinks he is living? And to what a kind of Africans does he thinks he is talking to? Senegal is one of the most politically stable countries south of the Sahara and a true democracy. Even with Wade's attempt to make it into a monarchy on the Bongo’s model. That country also has a more diversified economy and more abundant labor force than Gabon. We believe that the only reason UO was interested in Gabon, was that Gabon had 20 million dollars to throw out of the window; a thing that Senegal would not have done. The rest is a fable for children.

On Gabonreview the following is written:

This money is not a gift. It is the capital of an investment fund to support the partnership Oregon-Gabon. It is limited to functions at the center, which means it cannot support other efforts of the university in other countries or Gabonese activities that are not related to the Center in Libreville. According to experts from the University of Oregon, profit that depends on the financial markets should be between 3.5 and 6% of capital invested per year. An investment of $ 15 million can expect between 4 and 4.5 million (2 to 2.5 billion CFA francs) per year of income. This is the money to pay the costs of establishing and operating the center of Libreville, the cost of students and teachers when they come to Gabon. The Gabonese investment, the capital, remains the property of Gabon. This is not a gift to the university.

The analysis of Le Gabon Enervant/Annoying Gabon: this blog has consulted all the documents about this transaction that have been made public. The First anomaly, the UO itself classifies the money received from Gabon as what they call a "donation." All these donations are handled by the Foundation of the University that invests the money. The Gabonese money is not separated from the rest of the moneys UO has received. This money will be invested as belonging to UO and will be managed by UO. Gabon has no say because we have found no trace of such a control mechanism anywhere. If UO describes the contribution of Gabon among its received "donations", it is exactly that. We do not see where there is any room for discussion. Eric Benjaminson can try to explain the gymnastics by which money that is invested as part of the UO’s endowment may still belong to Gabon? This money belongs to the OU which will use it to fund some kind of nebulous center tied to Ali Bongo; for everything else, the Gabonese people are completely in the dark. To tell us that this money remains the property of Gabon is an insult to our intelligence. The money is gone and will not come back. It only remains to be seen what services will be provided by UO in return.

This disjointed information toward which Eric Benjaminson is trying to steer the Gabonese people is not the result of chance. We are in full disinformation mode because Eric Benjaminson is neither naive nor ignorant, but coldly cynical as we will explain in our next post which will focus on the internal politics of Gabon. But we also are not naive and have our eyes wide open!