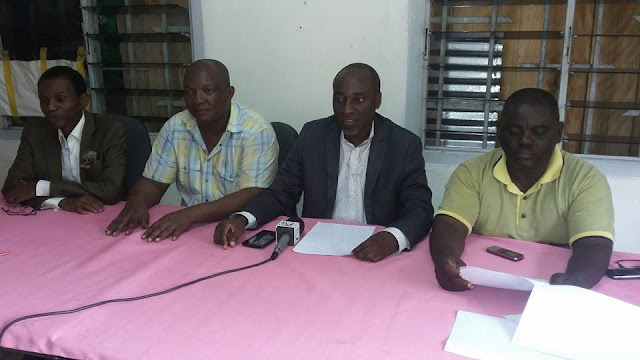 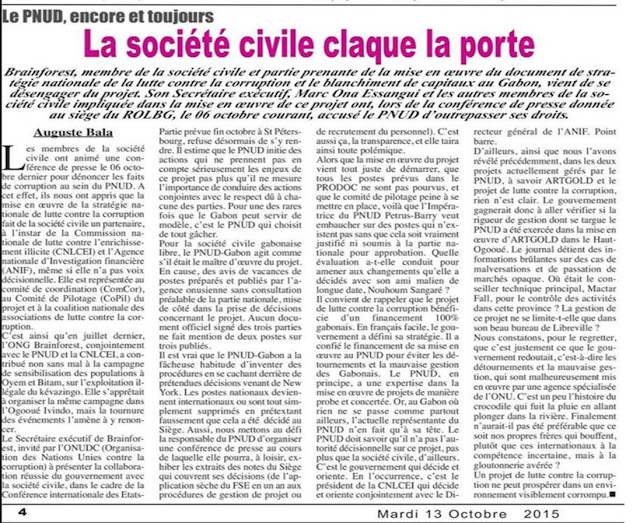 The free civil society of our country has issued a statement of primary importance, ringing the alarm bells about the complicity between the UNDP office in Gabon and the corrupt regime of Ali Bongo; both trying to hide the predatory system of plundering our public finances. Below is the press release:

The day of 9 December was dedicated by the UN as a commemorative day for the fight against corruption, fight that was legally sealed by the development and adoption of several UN conventions signed and ratified by the Republic of Gabon since 2003. They are:
- The Merida Convention;
- The Palermo Convention;
- The MAPUTO Convention (U.A);
- Regulation N° 1/03 of the CEMAC-UMAC adopted on 3 April 2003 in Yaoundé.

Furthermore, we see the eagerness of the UNDP Representative to exclude from the National Strategy for the Fight against Corruption and Money Laundering the three NGOs that have been elected by their peers to represent them in the Steering Committee, the Coordination Committee, I am talking about the NGO ''You do not buy me”, BrainForest and ROLBG. Thus, as we announced it as a premonition on the day of its launch by the Prime Minister, Head of Government, of the National Strategy, to date the Steering Committee is still not functional, its president and members representing the ministerial departments have still not been appointed by the Head of State!

This is the perfect proof of the public authorities refusing to initiate a real fight against corruption and money laundering in Gabon, despite the huge sums invested by the taxpayer, about 1.35 billion CFA francs managed by UNDP and the National Commission for the Fight against illicit enrichment.
Faced with the resignation of the state to bring UNDP to order, a simple executing outfit, the Free Civil Society condemns this complicity which aims to bury the developed Strategy to curb corruption in GABON.

This lack of strategy encourages the exponential rise of the harmful effects of corruption in our country.

Never have our economic resources been plundered this much. Never have budgets announced with fanfare since 2009, been deboned in full sight of everyone and with impunity as to lead the country into bankruptcy. Because of corruption in high places encouraged to be endemic, the 'country is on the ground' like pathetic Greece.

Mass unemployment is the norm, causing the rapid impoverishment of low-income populations.

Instead of celebrating this day with pomp, the State and UNDP have chosen inertia, lethargy and resignation before this cancerous gangrene that is plunging our country into the abyss of poverty and misery.

Thus, we are calling on the national and international community-on the resigned option that our country and UNDP the technical partner, have taken, which seriously undermines its economic future due to the refusal of future investors to come to a corrupt country.

It is because of them that this important day is ignored in Gabon.