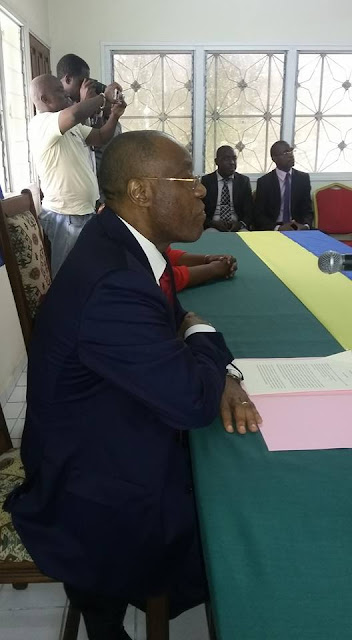 Since the 2009 presidential election, the traditional organizations surrounding society that are, firstly, labor, learned circles and other associations and secondly the political parties, have mostly lost credibility because they have not truly played their role. The first ones (unions, learned circles and other associations), mainly because of their lack of consistency and rigor, lack of foresight, their low spirituality, and their extreme politicization; the second ones (political parties) because gnawed by intrigues, parricide, counter nature alliances and other betrayals, have not always proved capable of conceiving great plans for the future, for a reassuring alternative, likely to fundamentally change the Gabonese society and improve the lives of our people.

Yet, it was not for the lack of successful attempts: the salutary idea of creating a united front of the opposition, as all past attempts, has not kept its promises. Fortunately, mindful of past failures and in view of the carelessness and arrogance of the system in place, the political class has turned the corner, responding positively to the calls of the free civil society on the one hand, and a population increasingly destitute, on the other hand.

Thus, it has responded overwhelmingly to the call made and supported by political parties, the free civil society and personalities from all sides.

At the basis of several motivations:
1) put aside the egos and other personal and partisan interests;
2) avoid subjects that are sensitive and divisive;
3) focus on the essential: the removal of President Ali Bongo Ondimba and block at any price his candidacy for the next presidential election.

This is what justifies the birth, not of an nth structure, but an ultimate structure, called: the Sacred Union for the Homeland, for a patriotic uprising.

Here it is not a question of opposition, majority, or organized civil society, but of all the forces of the nation, to straighten up Gabon, to lift it up and wash it from all the filth in which the Ali Bongo Ondimba has soiled it.

Your servant has modestly accepted the proposal that was made to him to chair the coordination of this prestigious and formidable structure.

In recent months, the cacophony of opposition leaders and the dissonances of the organized civil society messages left people thinking that there was nothing more to do and that Mr. Ali Bongo Ondimba was the only master of the game. The reply is here today: the birth of the Sacred Union for the Homeland.

Dear compatriots, no sacrifice is too great for a people to obtain its freedom. It is time that the people of Gabon stand up as one man, take their responsibility before imposture, neglect and dishonor. But this requires a method, rigor and group discipline.

Stand therefore ready, now, to respond to the patriotic rallying words issued by the Sacred Union.

Ali Bongo Ondimba in his eyes certainly still has three formidable weapons:
1) the decree of appointment, which wreaks havoc in an environment of poverty;
2) the army which he uses and abuses;
3) the resources of the country he plunders at will and are used to corrupt everybody along the way.
In addition, as elements of dialogue, he knows only of poison, the knife and the bullet.

In recent years, each of the entities of our country and / or each in their own name, has launched actions and individual or group attempts, which led to chip away, little by little, day after day, Mr. Ali Bongo Ondimba’s power. It only remains for the moment, it seems to me, a last root or a last bolt to be disassemble for everything to collapse.

But the final victory, for it to carry weight, to be of a promising future, should not be that of a person, a clan, a group, an association, a party, but of all the Gabonese people.

Therefore, it is necessary that all the people get their hands dirty for that victory to be the responsibility of all. Solidarity thus obtained will constitute an essential foundation for rebuilding our country, our nation, in its subjective sense, i.e. a community conscience and values. There is no victory more beautiful than that which is shared.

The first act of the Sacred Union is the resolution, the second will be organizing a meeting, a large meeting which elements will be communicated later.

The resolution adopted by the plenary assembly, proceeds from a principle: the presidential load carries an obligation for its holder to be exemplary vis-à-vis the Nation.

Ali Bongo Ondimba, who was elected in 2009 in disputed circumstances, and who must answer for his actions before two courts duly called upon, cannot be a candidate for the next presidential election in Gabon.

Indeed, to document his application for the election of the President of the Republic in 2009, Mr. Ali Bongo Ondimba, Minister of National Defense at the time, presented a birth certificate whose content is unreliable.

Considering that these facts were committed, which constitute prejudices of forgery, use of forgery and violation of oath, are to be taken before the jurisdiction of the High Court of Justice, in consideration of the status of their author.

Formally called upon, this court unfortunately cannot act on the ground that the appointing authorities have not made the appointment of its judges. From this obstruction of the action of the justice system, which interrupts the normal functioning of the constitutional public power of justice and adds to the perjury, the prevention of violation of oath, this causes an unexpected regime crisis, which reveals that Gabon operates under the rule of a rogue state, in which members of the ruling regime have planned their impunity.

At the same time, he produced a declaration of birth, established under the cover of the City of Brazzaville, to prove his parentage. The form of this document and the authority who signed it adds to the suspicion.

As a public act, that certificate normally presented in a typewritten form, is hand-written, established under the seal of Mr. NZALAKANDA, who was no longer in function at the Brazzaville’s city hall at the material time. In addition, this declaration of birth is curiously signed by Mr. Albert Bernard Bongo, who has never been an employee of the municipal administration of the city of Brazzaville.

To shed light on this statement and expose to the whole world the criminal network involved in the preparation and production of this second false public document, a complaint was filed before the Court of the city of Nantes.

The evocation of the candidacy of Mr. Ali Bongo Ondimba, who intervened in this particularly controversial area, justifies the two main reasons for the Resolution 1.

First reason: strict compliance with Article 10 of the Constitution

The Basic Law calls on all citizens to defend the nation whose will is reflected in the laws of the Republic.

To be eligible for the highest office, regarding Gabonese having acquired Gabonese nationality, the Constitution of the Republic of Gabon qualifies their descendants from the fourth generation.

This requirement, which is laid down in Article 10, is the result of the Constitutional Law No. 3/91 of 26 March 1991, after the National Conference. It was not developed for the opportunity to obstruct an individual. It is the result of a broad national consensus which is authoritative.

By calling for strict compliance with Article 10, the Plenary Assembly has exerted a citizen watch, while it sends a warning message.

The Minister of Defense, who became President of the Republic in favor of a false public documents he uses, committed perjury, and thereby incurs the sanction of dismissal.

This sanction to be pronounced by the competent court, which has not been established by the President of the Republic himself and by the National Assembly.

Justice is dispensed on behalf of the People by the judges. This means that the time has come for women and men of our people to rise up and succeed in demonstrating that, faced with corruption, lies and deceit of those in power, there are still those who are not willing to sell their souls to the devil and are firmly committed to a credible alternative to the current regime.

May God bless our dear Gabon!

Pr. Albert Ondo OSSA
President Coordinator of the Sacred UNION for the Homeland