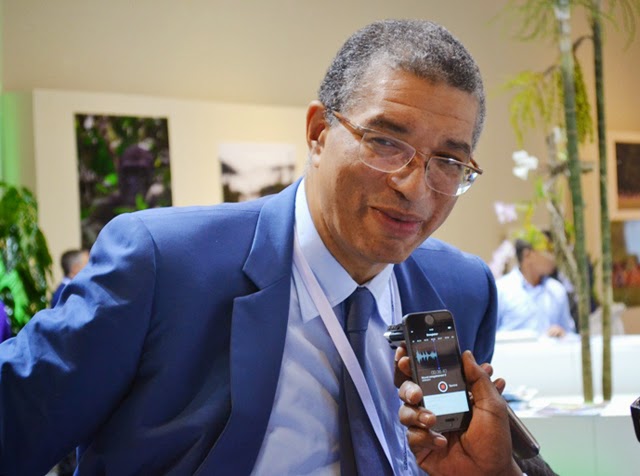 A surprising interview published in Gabonreview, causes us to write the post below. The interview in question is by Lionel Zinsou and it is surprising because it so outrageously and offensively misinforms about the power relationship established for decades between France and the countries of the CFA zone, regarding monetary policy. It is a distressing interview full of half-truths and yet highlighting our concerns regarding this media which we have been accustomed to think of as more discerning. It is obvious that the paternity of the content belongs to Lionel Zinsou; but that media could still have been able to give some space to a less françafricain economist for a balance of viewpoints. Published in solo, that interview seems to validate all assertions by France portraying the CFA has having only advantages and very few disadvantages for African countries, which is absolutely false. There is a Himalayan documentation showing that Lionel Zinsou is dead wrong in this interview. Reading this interview, we almost want to scream with rage. We will summarize a few points and hope that Gabonreview’s editors would have the courage to publish another interview with a less "political and devoted to Françafrique” economist. But until then, here is our point of view, because deception must be fought on all fronts!

It is important to start this reply by a review of who is Lionel Zinsou; this man is the son of the former Beninese Personal Doctor of President Léopold Sedar Senghor, who was also the brother of former President Emile Derlin Zinsou of Dahomey, who spent his exile in… Gabon, under the protection of a certain Omar Bongo, after being ousted from power in 1969. Lionel Zinsou is the nephew of Emile Zinsou. For the record, it is to reinstate Emile Derlin Zinsou to power that France organized from Libreville, the failed coup against Kerekou in 1976, which caused the expulsion of thousands of Beninese citizens from Gabon. This truth had to restore, since Gabonreview did not!

Lionel Zinsou is a protégé and former Councilor of Laurent Fabius, the former French Prime Minister and Minister of Foreign Affairs currently in office, who also took part in the Attias’ Forum. He is also closely linked to the Rothschild bank where he was Managing Partner. These truths deserved to be restored because Gabonreview did not!

In the interview, Lionel Zinsou said: "I am Beninese citizen and the French President asked me to prefigure, to organize a foundation of private and public sector to cooperate together for Africa's growth "

Comment of Annoying Gabon / Gabon Enervant: when the French President, Francois Hollande, asks an African to organize a foundation for growth in Africa; knowing the Franco-African relations, can we for a moment think that this African is chosen to work in the interests of Africa? The answer, given the history of the last fifty years, is obvious. When you read that admission by Lionel Zinsou, you understand better the meaning of his positions regarding the role of the CFA francs in Franco-African relations; for him, the CFA is a marvel for Africa. It is understandable! This is the opinion of his mentors, so he thinks the same!

In the interview, Lionel Zinsou said: "This is a debate that I often have, especially with young people, with intellectuals who think that we do not have monetary independence. Me, I think we have a monetary independence. We have a currency, the CFA franc, which is a vector of stability plus it is a strong currency. "

Comment of Annoying Gabon / Gabon Enervant: the CFA monetary independence is so effective, that for the devaluation of the CFA in 1994, no African was either consulted or involved in this decision. The African Heads of State were simply presented with a fait accompli. Remember, dear readers, that it is neither the French President nor the Prime Minister and even less the Minister of Finance, who informed the African Heads of State, but the Cooperation Minister who came to inform these Heads of State, herded like cattle in a hotel, of the fait accompli. Mr. Lionel Zinsou, if that is what you call monetary independence of Africans, we afraid to ask you to give us your definition of financial bondage. No Mr. Lionel Zinsou, Africans have no authority over that currency; if you do not mind that, however, do not take your feelings for universal truisms.

In the interview, Lionel Zinsou said: "No, it is a myth. Thank you for asking that question. I remind you of the scandals of the management of sub primes by central banks. It is the central banks that manage their foreign currency assets, period. This operation account in the French treasury is a fantasy. It must be understood that the operation account at the Treasury is an account through which transit very low balances. It is necessary that you keep in mind that the money supply of the franc zone is a few days of French money and a few hours of money in euro. So you cannot imagine that there is a treasure in the French treasury. There is no smaller treasure. There is an operation account where are entries that do not matter."

Comment of Annoying Gabon / Gabon Enervant : So like that, Lionel Zinsou wants us to believe that the operation account of the countries of the CFA zone only has a negligible amount in it, is a trifle, a myth that has no importance. Not only by this statement, Lionel Zinsou insults our intelligence, but he also denigrates our sovereignty, and our right to fully control our economic emancipation. As have shown literally thousands of articles and books on the subject, the two African central banks of the CFA, located in Dakar and Yaoundé, are only antennas of the French Treasury. This arrangement places the former French colonies in black Africa in a situation of monetary "dependency" because it requires that these countries deposit 50% of their foreign exchange reserves in that account at the Bank of France. Mr. Zinsou, 50 % of the reserves of the countries of the CFA zone, may be nothing for you who enjoy petit fours with Fabius and friends of the Rothschild bank, but it is huge for African countries. Mr. Zinsou , you who are high-ranking economist, can you give us an example of another currency area or even another country in the world, in which half of the reserves are deposited in another country, to the exclusive use of that country? When you say, Mr. Zinsou, that these amounts are insignificant and do not represent but a tiny percentage of French or European money supply, you speak with a forked tongue, as this is akin to saying that African routes of Air France are ridiculous because they represent only a small percentage of the total operating scope of Air France; but the reality is that the Libreville-Paris-Libreville line can cost up to three times the price of the Paris-New York-Paris one, with almost equal distance and lower operating costs in Africa (overflight costs and landing costs, etc.), in the end, African lines are the most profitable of all of Air France operation; why? Due to the monopoly enjoyed by that company in françafricaine Africa. Dear readers, make no mistake about it, the same is applied in monetary relations between France and Africa. People like Lionel Zinsou are there to ease the swallowing of the pill by other Africans; and we say no to this manipulation. If France does not want this operation account, it can close it and repatriate these funds that have accumulated to their rightful owners, the Africans...

Nice try at misinformation Mr. Lionel Zinsou; but all Gabonese are not stupid!