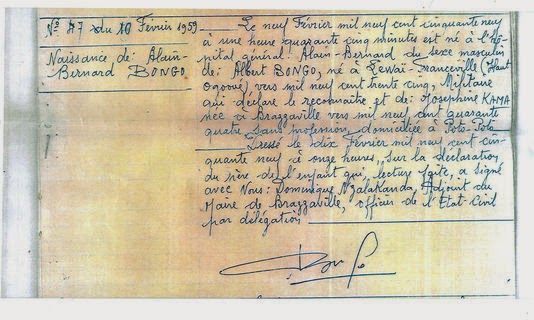 Ali Bongo is now a prisoner of the acceleration of his impostures; he can no longer turn back because the rubicon has been long crossed, he must move from crude lies to even more rude rougher fibs, hoping to convince the public that his birth in Brazzaville in 1959 is other than fiction. Unfortunately for him, it is a waste because the more he lies, the more proof to the contrary of what he says is easy to demonstrate.

1. A photograph of a yellowed page supposed to belong to a civil registry of the municipality of Brazzaville. That the Ali Bongo camp claims to have been discovered a few weeks ago.

2. A picture supposed to have been taken in 1963, showing Alain Bongo with members of the Teale family and friend.

The problem Ali Bongo has, is that Brazzaville was the capital of French Equatorial Africa and it was in Brazzaville that could be found the best organized administration of this colonial space. We saw this attempt to add to lies and to falsehoods coming and were prepared for this eventuality. First, dear readers, it is on 15 January 1910 that was created in Brazzaville, the Government General of French Equatorial Africa (AEF). The system of registration of civil status of citizens begun at that time.

On 12 April 1934, the Standing Committee of the Government of AEF issued an order regulating for the first time the natives’ civil status. This order was as follows: "In AEF declarations of birth and death of people governed by local customs, those of marriages and children recognitions occurring following the same customs are declared, received and recorded in accordance with the provisions of this ordinance". Dear readers, what is more important to understand here is that this decree explicitly stated that these guidelines were mandatory especially for military personnel serving and retired and their descendants, for indigenous administrative workforce, for indigenous leaders recognized by the administration and their descendants, the descendants of all people who have been the subject of a previous declaration of civil status.

On 15 June 1939, a decree was published regulating marriages, and the order number 973 of 13 December 1940 implemented the decree: the marriages of native French subjects should be observed by the land, township or tribe chief of the wife’s residence who should be notified at least two months before the celebration. A marriage certificate is issued to them for this purpose. This decree reorganizing native-civil status in AEF made the declaration of weddings mandatory.

The decree of 12 May 1944 number 1054 made obligatory any statements regarding the civil status, including its modifications. To do this, the Government of General of AEF organized throughout the territory of the Middle Congo, a population control system by district. This operation was carried out village by village. This was the first administrative census whose objectives were overall headcount of inhabitants of the administrative district. All information on clans and families were recorded in a register entitled "monograph" open for each village, to be kept and filed with the greatest care into the archives.

In the framework of the Gaston Deferre Act of 1957, civil status within what was to become the Republic of Congo was revised in a decision numbered 78/57 of 12 December 1957, reorganizing the territory of the Middle Congo, the civil status of citizens under local law. This document registered under the symbol 1618/INT-AG of 12/26/58 is in place in Congo Brazzaville until today. So when Alain Bongo was supposedly born in 1959, it is the document which was in effect. So what does this document say?

The main civil registration centers are located automatically in communal houses of districts in district capitals and administrative control station (PCA). They are led by the mayors or deputy mayors in municipalities, by district heads or PCA in districts or P.C.A.
The officers of civil status of the main centers have jurisdiction of:
- Receiving all the acts of civil status (births, deaths, children recognitions, marriages);
- Making the necessary entries on birth or marriage records deposited in the archives of the main center of civil status.

The Vital facts are recorded in the registers. Separate records are established based on the nature of the event (births, deaths, marriage). The register is kept in double with one with detachable cover.
- For births the register comprises: a strain for archiving; a voucher No. 1 completed in the secondary center and destined to the main center of the service.

3. Procedures for registration of acts of civil status

Within 30 days following the birth of the child, a parent comes to the civil registration center of the Town, with the declaration of birth and the identification of the father and the mother of the newborn. In the civil status center the declarant is received by the clerk who transcribes the information contained in the declaration of birth and other information in the birth register in one copy. The cost of this activity is 1000 CFA francs. The withdrawal of the birth certificate for the parent is done one or two days after the declaration, and after being signed by the registrar.

Dear readers, we have given you all the information to conclude that the document presented in the newspaper Le Monde is a new false document for the following summarized reasons:

1. In 1959, we are told that Albert Bongo, the alleged father, was a soldier in the French colonial army. Therefore, he was under the weight of the imperative statement to declare every birth of a child. How the son of a soldier in the French army was able to grow up, go to school, without a birth certificate, if he had to go back to the archives of the municipality of Brazzaville to find bits of information in an unidentified? If the birth certificate was lost, when has it lost? We must be able to trace a copy of the original in a school somewhere! It is this original that will be compared to what is in the Nantes archives that have already been visited independently by Pierre Péan and by our blog, and maybe also by other Gabonese, without finding a trace of a birth certificate for Alain Bongo; So if we are suddenly presented with a birth certificate saying that it was found at the bottom of a suitcase, someone will have to explain this magic.

2. Alain Bongo is assumed to have been born at the General Hospital of Brazzaville, which was brand new in 1959 and was the most advanced in all of AEF; it was also in the hands of the Health Services Administration of the French Military. The obstetrician and midwife who delivered the baby certainly issued a declaration of birth with specific information. This declaration of birth was established administratively, that is to say with the authors' names, signatures and stamp of the hospital.

3. It is with this declaration of birth in hand that Albert Bongo and Josephine Nkama went supposedly to the Vital services to get the birth certificate established. The document in Le Monde said that this was done on 10 February 1959. Apparently, Josephine Nkama who fled the hospital the day before, a few hours after cesarean section, because civil war had broken out in Brazzaville, was no longer afraid the next day and went to the administrative services; her civil war certainly had decided to observe a truce to host the Alain Bongo child and enable the establishment of a his birth certificate.

4. It can be assumed that the parents of Ali Bongo handed an official declaration of birth with signatures and stamps proving its authenticity to the civil registration services; but curiously, the transcript that was made by the civil status official of this piece of paper that is not official, that is to say without header, with no indication of detachable vouchers associated in this document, but especially with a unique signature and without administrative stamp, tells us that this piece of paper is by no means an administrative document. Dear readers, a document is administrative only if it is signed and duly stamped. This piece of paper is absolutely nothing and has no administrative value. In addition, the shape of these writings is not consistent with the administrative process of the time, even if the documents were written by hand. When they need go to the next line, the document does not. The sentences are aligned without following the administrative Protocol. This is a fake.

Dear readers, we could write 10 pages on the subject, but you do realize that with the Bongos we are swimming in full falsehoods. In the next post, we will discuss the ridiculous photo made with the Teale family that could only fool a 2 years child.