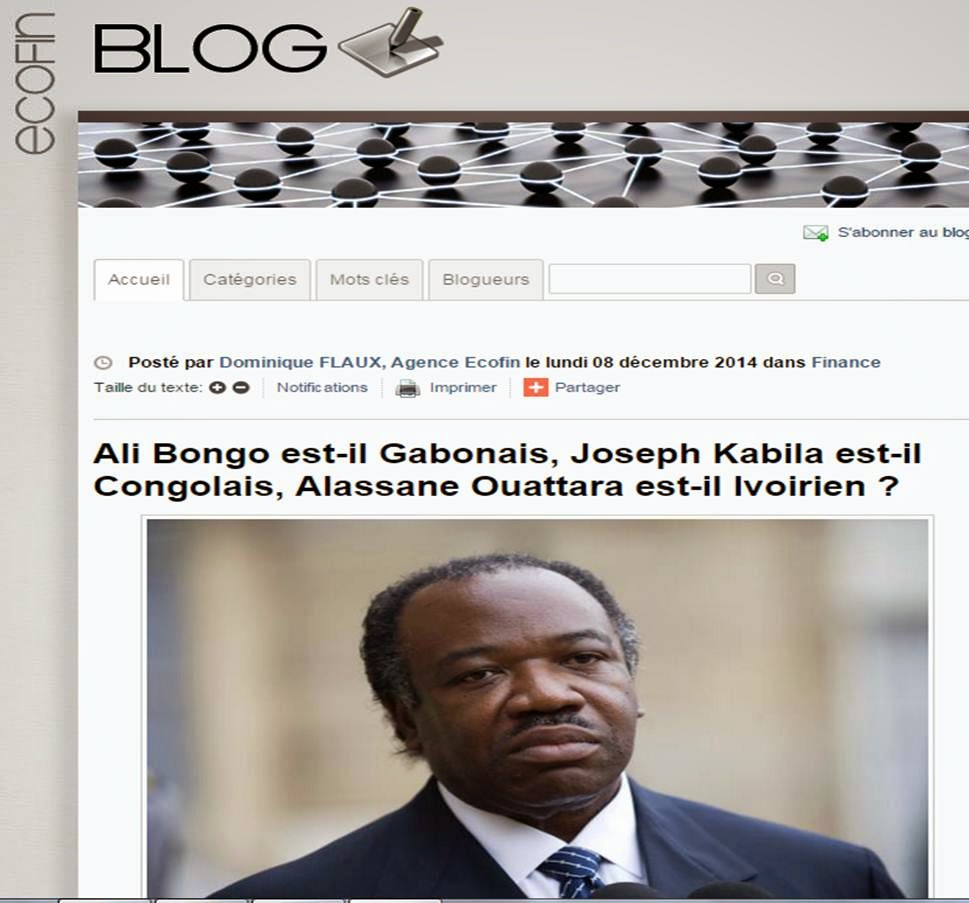 The Ecofin Agency on its website is said to be an African economic information agency based primarily in Geneva, Switzerland. This website contains a blog annex in which one Dominique Flaux, in a consciously oriented article, is trying to divert the debate of Ali Bongo’s forfeiture, by reducing it to small and banal considerations. No Mister Flaux; this case is of utmost importance to the present and the future of Gabon and you cannot misinform the Gabonese nor the Africans and people who really want to understand the essence of the rejection of Ali Bongo by the Gabonese people, by offering slanted analyzes as you have done. Your article is very poorly articulated and its conclusions are only tangential to the facts in question. We will respond to your article point by point to clearly demonstrate to readers how much you wade in amalgamation.

The concept of ivoirity cost the Ivory Coast 10 years of nightmares and thousands of deaths. It was invented by Henri Konan Bédié to prevent the current president who has now his support, from coming to power. Today the Gabonese opposition disputes the gabonity of President Ali Bongo, as part of the Congolese opposition claims that Joseph Kabila would be Rwandans. In the US, some American neo-conservatives had also tried to cast doubt on the origins of Barack Obama, even seeing in his official papers, falsification evidence.

The concept of gabonity, Mr. Flaux, is it you who are inventint it, because there is no question about that in Gabon, and you know it. Unlike what happened in Ivory Coast, no one is disputing Ali Bongo gabonity. Recently in Paris, on the airwaves of Africa 24 and France 24, Bruno Ella Nguema of the Convention of the Gabonese Diaspora, and Marc Ona Essangui who is a well-known leader of the Gabonese civil society, were firm on that point: Ali Bongo is a Gabonese citizen; there is no debate about that. However, it is the case that the Gabonese constitution does not allow a Gabonese of recent adoption to be eligible to the Presidency of the country before the fourth generation. It is the case that the evidence tends to show that Ali Bongo was adopted from Biafra and arrived in Gabon in 1968 and was formally adopted by the Bongo family in 1969; which does not allow him to be President of Gabon, under Article 10 of the Gabonese Constitution. Mr Flaux, the problem is not more complicated than that. The gabonity has not been raised by anyone; Ali Bongo is simply illegitimate before the Constitution. For comparison with what happened with regard to the US President Barack Obama, it is true that some of his compatriots were not certain that he was born in one of the 50 states of that country, such as required by the Constitution. Indeed, to be US President, in addition to having to be an American citizen, one must be born on American soil. To cut short the controversy, Obama presented his genuine birth certificate proving he was born in the archipelago constituting the State of Hawaii, and the debate was closed. In contrast to the clarity of the Obama case, Mr Flaux, the Gabonese were presented by Ali Bongo, with two false birth documents; a totally fraudulent birth certificate established in Libreville in 2009, which was used for his bid for the presidential election; and a declaration of birth also a forgery, which was published in the newspaper Le Monde. Mr Flaux, are you asking the Gabonese people to accept this way of doing? Would you want the Gabonese people to accept a president who presented himself for election using false documents? Would you accept that in Switzerland?

Today some Congolese who claim to be of the "Alliance of Patriots" are asking a DNA test to Joseph Kabila in order to prove that it is not Rwandans, like the Gabonese opposition is calling for one from Ali Bongo who for them would be of Nigerian origins. How can Jean Ping, who presided over the highest African functions, engage in such villainy and defend the concept of gabonity to settle scores, obviously very personal? In all latitudes, parentage is proved when parents recognize the parenthood of the child. A DNA test, fortunately, cannot break this relationship. Fortunately, because nature being what it is, worldwide, a sizeable percentage of fathers are not the true progenitors of their child. If tomorrow, politicians have to undergo DNA tests to prove their biological origin, there would immediately be an opponent who would explain that the mother of some heads of state, or candidate, at the time had a lover from abroad to cast doubt in the minds of the gullible voters. Is Mohammed VI really the son of Hassan II? Isn’t the real father of Angela Merkel Polish? Didn’t Macky Sall's mother have a Malian lover? What if Bouteflika had finally French blood? Only DNA tests could remove these suspicions...

Mister Dominique Flaux, regarding Ali Bongo, the situation is very simple. It was he who introduced, on his own, the false papers in his application for the candidacy. Knowing that the constitution forbade him the presidency, he made up a false story of Birth in Brazzaville which was a pack of lies; he created a “biological” mother whom everyone knows to be sterile and has never had children. Given the accumulation of falsehoods and forgeries perpetrated by Ali Bongo to circumvent the constitution, the Gabonese people are entitled to demand a DNA test between him and his so called biological mother, to clear things up. But Ali Bongo cannot submit to such a test, and you know that Mr. Flaux, because his forfeiture would be demonstrated conclusively. That's why people like you are trying to defuse the bomb Ali Bongo himself introduced in Gabon. The examples you give are totally missing the point, because even if Angela Merkel father is Polish, as the father of Jean Ping is truly Chinese however, these two people would meet all the requirements necessary to be Chancellor and President of their respective countries before their constitution, because their maternal ascendant cannot be doubted. The Gabonese people do not seek a quarrel with Ali Bongo, they just want the constitution to be respected and cannot tolerate a forger to be president of their country. Switzerland is a Federal State, a Confederation headed by the President of the Swiss Confederation and administratively led by the Chancellor of the same Federation. The Swiss Federal Constitution states that naturalized Swiss citizens do not enjoy the same rights to the accession to the Federal Council as the others citizens; then Mr. Flaux, why do you want Africa to be more permissive than Switzerland, France, Germany or the United States on this? In the US, Arnold Schwarzenegger cannot be president because he was born in Austria. Is it for you a good or bad thing? Are Americans xenophobic? Let’s be serious Mr. Flaux; in all countries of the world the Presidency is reserved for citizens of integrity and whose roots in the country are clear. It is a universal constant. In Japan, it is unacceptable that a Korean becomes Prime Minister and vice versa. We saw Alberto Fujimori, a Peruvian whose family is of Japanese origin, access to the Presidency of Peru. But this Fujimori family has been established in Peru for nearly a century and Alberto Fujimori himself was born in Lima in 1938, did all his studies there and attended the University La Molina. So he is someone whose history is Peruvian end to end. But Ali Bongo; who is he? Where does he come from? Can you respond to that? If someone came to the Federal Chancellery of the Swiss Council, by using false documents, would you accept that? Why do you expect Africans to accept this?

The current Gabonese regime is obviously subject to questions and must not go without criticism. But it should be noted as well that in the recent days, FAO commended Gabon for having reached the first stage of the Millennium Development Goal (MDG) one year ahead of schedule, while the ITU announced that the Gabon became the francophone African countries most developed ICT. If the Gabonese opposition believes it can do better, it must explain to its fellow citizens its program, its options, its projects and it must stimulate a reasoned democratic debate. But it is probably easier to use the concept of gabonity, a dishonorable concept for the apprentice sorcerer's handling it, whether in Abidjan, Kinshasa, Libreville and Washington.

Dear readers, the time when people took citizens of African countries for less than nothing is over. We are ready to confront, argument for argument, anyone, Gabonese or from outside, on the crisis taking place at the moment in Gabon. The exercise of Mr. Flaux has done is of a staggering incoherence and we cannot allow this kind of reasoning to pollute the Gabonese debate. Ali Bongo was caught red-handed in imposture. The solution is his removal. Any other alternative is now an attempt to drag the inevitable because Ali Bongo is a rotten fruit that is about to fall from the Gabonese tree.