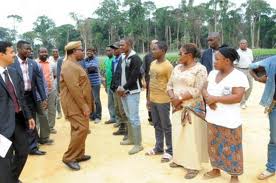 
It is said that the road to hell is paved with good intentions. According to estimates from the World Bank, Africa holds an estimated 60 percent of the world's pristine, unspoiled, unpolluted and uncultivated arable land. To get their hand on this land, multinational agribusiness companies are spreading across Africa to acquire this land to grow food, rubber and biofuels for global markets and promising to African government to bring them much-needed investments. But can these multinational be trusted to make good on their promises? A way to find out is to look at their past practices and tack record.


This blog has received a document from CorpWatch, a non governmental organization based in San Francisco, USA, that monitor corporations and their business practices and impact on populations. CorpWatch has investigated what Olam did in Laos, and if this is in any way what that company plans to do in Gabon, there is cause for concern for the Gabonese people. Below is a summary of what the report found. The lesson for the Gabonese people is that they would give up their land at their own peril.

Recently five men from four indigenous coffee growing villages arrived for the second time in the Lao capital, Vientiane. The five dignified men, dressed in their best clothes, gathered in a small room at a local NGO office in Vientiane to discuss their case. They are members of the upland Nha Huen/Yahern group, one of the many ethnic groups in southern Laos. This was the second delegation to travel to Vientiane to protest what they claimed was unauthorized expansion of a commercial coffee plantation into their ancestral lands. Conditions were deteriorating as more of their land was taken and planted with coffee. In one village, eight families whose gardens, rice fields and productive lands had been destroyed had nothing to eat.

These delegations, undertaken at great risk and considerable expense, challenged both Lao authorities and the Singapore-based agribusiness giant Olam International, whose Lao based subsidiary Outspan Bolovens Limited, had taken their lands for a monoculture coffee plantation. Originally granted 150 hectares, Outspan has already planted almost 1,500 hectares and is planning to cover double that--3,000 hectares--in coffee trees.

The protest is the latest in a long line of threats to the farmers’ lives, land and livelihoods.

“The French colonials brought Arabica coffee to our area in 1954. Later we fought to make them leave our land, just like we fought against the Americans,” said Soumpheng, a 40-year-old farmer from Paksong District, 700 kilometers south of the capital. “We are veterans of fighting and are unafraid."

“Our ancestors are angry that we let our land go, so many of our people have become ill and died,’ Puan the unofficial delegation leader and elder said.

Between the farmers and Olam lies one of Lao’s most powerful, and some allege, corrupt families, the Siphandones. The district governor, Sonesay Siphandone is the son of the ex-President Khamtai Siphandone, a man feared and secretly scorned by many Lao. Siphandone the younger granted the first land concession to Outspan.

Laos is one of Asia’s last hard line authoritarian countries, whose government the U.S. State Department criticizes for human and religious rights violations, arbitrary arrest, and lack of press freedom. Recent critiques by long-time Lao scholar Martin Stuart Fox and Colum Graham in the Australian National University’s New Mandala note that Laos is “so saturated with corruption to a degree that mostly inhibits development.” It’s this corruption that allows land to be taken from its owners with impunity, and why Transparency International’s ranks Lao 158 of 180 on its corruption index.

Within this context, the protesters’ very public complaints about the apparent land grab are both courageous and rare.

During his April trip to the capital, Puan detailed Outspan’s land grab. A careful man, he opened his huge red ledger, a Lao Domesday book, and read out a litany of losses: 205 hectares of productive forest, 10 hectares of housing land encroached on, sacred forest destroyed, 71 hectares of watershed forest felled and replaced with coffee plants, wetlands and ponds filled, their own coffee plants gone, pampas grass clumps for broom making gone, and 14 hectares of specialty incense bark trees all burned. In all, 52 families had lost their land and income sources. Compensation so far? None.

“We will die for our land,” says Puan, the informal leader of the delegation said.

“Maybe some have to die so that the world takes notice of what is happening in this country: the misuse of power, the suppression of protest,” says a young Vientiane-based lawyer who declined to be identified as he is informally assisting the case and fears reprisal.

Olam’s business operation in southern Laos was designed “to develop coffee cultivation by assisting local people to grow and produce for export,” Outspan Director General Sanjeet Khurava told Khaosan Pathet Lao (KPL) in 2010. KPL News, the official government newspaper, failed to mention that land owners, the population, had not given permission for the “assistance.”

Since Olam’s establishment in 1989 in Nigeria--trading cashews, cocoa, shea nuts, and cotton--the firm has rapidly expanded to become one of Singapore’s top 40 companies. Today it is expanding its African agribusiness operations.

For the the men in the delegation the turning point came in 2010. It was then that Governor Siphandone granted Outspan Boloven the use of 150 hectares of land for 30 years.

All members of the Yahern delegation agreed that no agreement or contracts had been presented to, or signed by, the villagers.

“In 2010, we were told that the District Land Management Authority wanted to do a survey as they planned to give a concession to Outspan. The team came and marked out the initial 150 hectares, and almost before the villagers had time to react, the company brought in tractors and leveled the ground, toppling anything in its way and have continued to do so." Video shot the week before the delegation arrived in Vientiane showed a devastated area. Smoking black stumps were all that remained of teak and rosewood trees. Valuable construction-grade bamboo was incinerated; undulating clods indicated a cemetery; finally, the image became that of distraught women standing around the vestiges of an ancestral shrine. In the background, Outspan’s pert coffee trees seemed to mock the devastation.

“They worked day and night. The noise and light did not allow us to sleep,” said Puan. “We went out and tried to stop them, but they told us we had no rights any more as the land had been granted by the governor.”

When the village heads asked to see the land certificates, the survey team told them to go to the district government offices.

At every level of government, the villagers said, they were greeted with obfuscation, lies and threats. “Yes, both the police and soldiers threatened us,” Puan nodded.

When a village delegation went to the district government office in 2011, Puan said officials passed the buck to the provincial government, which promised to send someone to investigate. In the end, the officials took no action, simply blaming Outspan for mistaking the boundaries of the concession.

After repeated protests, the villagers were told early in 2012 that they were free to move somewhere else, an offer repeated in mid-May by officials from the national government sent to investigate the farmers’ claims. But according to the National Regulatory Authority, relocating is dangerous, since much of the area’s land remains contaminated by the unexploded U.S. bombs from the secret war that continues to maim and kill villagers even today.

She also referred to the Livelihood Charter which “formalizes our long-standing commitment to invest in the rural communities of emerging countries across the world…and to strengthening farmers within the global supply chain. We aim to bring prosperity to our farming and rural communities. We build long-term relationships based on fairness and trust. We seek to transfer skills and knowledge through partnerships.”

Firouzyar added that the company had engaged an independent team of consultants to investigate and perform an audit.

But a Vientiane-based filmmaker, who preferred not to be named, described the April audit: “Foreign men came to the villages. We were told they were from the company. But the strangers didn’t talk to us, and ignored us when we tried to talk to them.”

We Want Our Land

“We don’t want an agreement or even compensation. We want our land back.” Puan said angrily at the April meeting with CorpWatch in Vientiane. The others nodded in agreement.

Meanwhile Olam has promised 12 stakeholder meetings, Firouzyar wrote in April.
When asked if Governor Siphadone profited from the deal, Olam’s London representatives chose not to disclose if or how much the governor was paid for the concession. But, Firouzyar wrote, Olam is “actively recruiting a qualified, local community specialist to be based in Laos to ensure that we are able to build strong local relationships going forward.”

It may be too late. The villages are facing hunger and illness, and they are angry their land is being given away with impunity, despite their longevity and certification. Another delegation is planned despite the expense, CorpWatch was told by the villagers and the filmmaker.

“Outspan gave the villagers, 20 tons of rice 3 years ago. Enough they thought for over 1,000 people. But in the long run, how can the 172 families of Nong Mek, Nong Tua Nong Hin and Nong Tiem live?’ asked the filmmaker. “We are sending emergency food aid down to the families that are starving. But we cannot keep doing so. Why should we pay when Outspan makes the profit?”

Protest in Laos is rare, but land grabs are fueling widespread rural unrest that the Lao government is finding harder to suppress. This case may be a watershed in governance, and the risks the delegations have undertaken have inspired others to speak out.

Even high school students have written about it: “Somboun knew money could not replace his beautiful natural environment. Money [from coffee plantations] can be expended eventually, but nature, if nurtured properly, will last forever,” wrote Damlongsay Lonhsaithane in his essay “Title Deed.”

“This is our dignity and our lives,” Puan said turning as he left the meeting. He gave a grim smile. “We are not afraid to die.