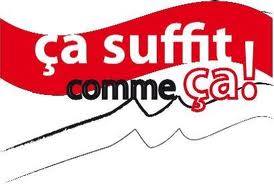 The serious and persistent crisis facing Gabon for years, and which took a turn especially dramatic since the takeover of Ali Bongo Ondimba in 2009, has led the main organizations of civil society to come together around a common platform, thus giving rise to the Movement «Ça Suffit Comme Ça».

To overcome this crisis, after a thorough analysis, the Movement has offered that all stakeholders adopt a reform plan based on thirteen (13) basic points.

It is based exclusively on these 13 points that «Ça Suffit Comme Ça» has consistently based its relations with politician actors of all stripes. These are also the 13 points that guided the movement's participation in the Paris meeting with members of the political opposition and the Diaspora. This meeting led us to share, among other things, the finding that the holding of a sovereign national conference is the best compromise to organize an exit from the crisis that is peaceful, efficient and sustainable.

The Civil society shared this conviction at various citizen meetings organized for local people. It notes with satisfaction that a large majority of our fellow compatriots welcomes this route.

The Civil Society is, however, concerned about several points about which it wishes to call on all political actors.

Firstly, it notes with regret that some politicians are presenting the call for a sovereign national conference as a personal initiative of a specific person, André Mba Obame, and of a specific political organization, the former Union Nationale. This is totally false!

Indeed, «Ça Suffit Comme Ça» had long ago proposed solutions whose spirit is similar to that of the national conference. Already on January 27, 2011, the Civil Society launched an appeal for dialogue and consultation after the ceremony of swearing in of André MBA OBAME while telling all stakeholders "that the act of Mr. MBA OBAME was political and that the only way to answer to it was by a political response."

There can therefore be no question for the Civil Society organized within «Ça Suffit Comme Ça» to blame any political structure whatsoever, to join with dynamism to an idea that it also defends.

But if we welcome all initiatives taken so far by the former Union Nationale and its partners in the CPPA, to promote the establishment of a sovereign national conference, we strongly encourage them to never be tempted to believe that they can succeed alone. However, we encourage them to work hard in mutual respect toward convergence with all political actors, sincerely wanting to work for the well-being of the country so that the ambition to get out of the crisis through the peaceful national conference is carried by the largest number.
The national conference is everybody's business and nobody is its owner.

Another point of concern for the Civil Society is the hostility towards the Sovereign National Conference expressed by some politicians who we assume are sincere in their struggle for the establishment of a true democracy and the rule of law in Gabon. Some merely take to lashing out about this possible instrument to come out of crisis, others defend other tools they consider most effective and others do not hesitate to ethnicize the debate.

If «Ça Suffit Comme Ça» and its member organizations have been fighting for years for a victory of democratic values, and thus a contradictory debate, we believe that given the configuration and severity of the current situation, it is a principle of pragmatism and efficiency that must prevail. Indeed, the question at this time of crisis we are living in, is no longer about who has the best idea, but to work together to make successful the one that has established itself in the public debate and clearly meets the approval of a majority of the population.

In this situation, wanting to be right alone amounts to being wrong. Indeed, to oneself in a position in direct opposition to a proposed national conference already widely adopted is simply to weaken oneself.

We reiterate that we all have to gain by the holding of a sovereign national conference:

- The people who would finally find their voice after being for the past 20 years excluded from the political life
- The opposition will finally be able to actually defend his chances in a true and fair regular political competition
- The current government would be able to maintain a certain ability to stay in the political game that it would be likely to lose completely if this crisis does not end peacefully
- The Civil Society will play its role as a counter power and support of governments without fear.

The Civil Society cannot imagine that some political actors, including from the supposed opposition, would be tempted once again by the status quo or by special arrangements for personal gains at the expense of the popular interest.

May all remember the reaction of the people against the politicians who, having publicly declared not to participate in elections of last December 17 without the introduction of biometrics, broke because of their own interests, this popular pact by denying their oath.

Beware of our responsibility before history and before the people.

The last decade has been marked by a growing rejection by people of their political leaders, people tired of the repeated betrayals and certain silliness by these leaders.

In 2009, the Gabonese people regained some hope and agreed to give another chance to the political class by participating massively in the campaign of the anticipated presidential elections.

But once again the Gabonese political elites failed to rise to the challenge; on the one side by perpetrating an electoral coup and on the other side by being unable to unite before and after election. As a result, the people again largely withdrew its confidence in its political class as evidenced by the lack of popular support for various initiatives taken by both those in power and the opposition during the recent elections.

From the boycott of the legislative elections without guarantee of transparency, to the call for the convening of a sovereign national conference to end the crisis, the Civil Society has seen a renewed enthusiasm and hope of a population that seems again ready to give some credit to its political class provided that it is aware that this time it has to rise to the occasion if it wants to avoid this being the last chance given by the Gabonese people and a break which could be sustainable.

Beware to our responsibility before history and before the people.

The Civil Society is ready to support and assist any process by political actors working for real change in Gabon and for a peaceful from the crisis, as it has been already doing for a long time. But it is also ready to fight with the strongest energy, these political actors who would sacrifice the people on the altar of personal ambition and selfishness.

The Movement «Ça Suffit Comme Ça» invites each other to put the people's interest and the interest of the nation above partisan, tribal, sectarian and temporal interests. As each other remember that "it is the silence of good people that is criminal."