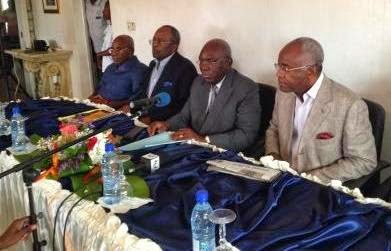 Days of Reflection of the Union Nationale were held from 7 to 16 March 2014. For the closing ceremony, its President Zacharie Myboto, delivered the following speech:

Lady and Gentlemen of the National Bureau

During three days, on the 14, 15 and 16 March 2014, were held the first days of reflection of our Party on the following three key themes: (1) The Union Nationale: Progress and Prospects, (2) The problem of alternation through the democratic process and (3) the equality of women, is the development of all.

These days that brought together activists from Libreville and those from other parts of the country have been very valuable in lessons as debates and exchanges, sometimes passionate, were constructive as evidenced by the recommendations that have come at the closure of our work. I congratulate you warmly on behalf of the National Office and in my own name.

You had to reflect, among other things, on the situation of the Union Nationale, its functioning, its financing, rehabilitation, mobilization and remobilization of its militants. Your thinking has also focused on the elections with the firm determination to return to the two-round election for all uninominal elections, the need for limiting the number of terms of the President of the Republic, on the necessary cohesion of the opposition, on the living conditions in Gabon and the silencing of public service media. The under-representation of women, women's participation in elections, the establishment of a quota policy, maintaining a women's organization within the party, are all topics that were discussed at the workshop "Women and policy.”

At the end of these days of reflection, I want to thank you for your trust and for the work done. I appreciate at its fair value the determination and serenity that prevailed throughout the three (3) days. Yes you did shows an exemplary state of mind yours, mixed with going above and beyond, with loyalty to our commitments, with foolproof solidarity, with courage and dedication.

My special thanks go to Madame Paulette Missambo, Vice-President of the Union Nationale, who successfully assured the direction of the overall events. They go the militants who kindly agreed to participate in the preparations and have remained mobilized since 07 this March.

It is also and above all you militants of the Union Nationale, who came from all over the country, to whom I want to say thank you and bravo. Thank you and congratulations for affirming your determination and commitment to the "Gabon for all" that the Union National continues to call for.

On 30 December 2009, in announcing our decision to create a great political opposition party, we said:

"Who could still believe us if in wanting to change in our country, we ourselves do not change the way we practice politics to serve the interests of the many rather than those of our own homes, villages and ethnic groups? The realization of this imperative change necessarily involves the combined efforts and minds of all those who put Gabon over their own position of power. Their gathering is needed now."

What these days of reflection confirm, and I have never doubted, is the determination which inhabit, since its inception, all the militants of the Union Nationale. The Union Nationale, our political party, is an act of faith in our country, our response to the expectation of our citizens.

I know many questions haunt our militants, including among others, the following: What is the status of the Union Nationale today? What is its mobilization and implementation strategy? How the Union Nationale intends to position itself to face new dynamics such as, on the one hand the results of the recent local elections, and on the other hand the defections in the ranks of the PDG? How do we organize ourselves to face the partiality of the administration and institutions?

These question should therefore now be put to public debate. Everyone would have understood why the Union Nationale has requested since July 2012, the holding of a Sovereign National Conference to allow all the vital forces of the nation to develop a pertinent comprehensive consensus capable to help Gabon overcome the political, institutional, economic ,social, cultural and moral crisis that it is afflicted by since 2009.

As always when the situation is complex, we must keep in mind the principles. Our goal, our mission, our duty is to impose democratic change to State power through free, credible and transparent elections. I am convinced that the renewal of our battle is on, that the unity of all democrats is possible. Like you, I see the lines moving. I know that if we organize ourselves, the political changeover for which we fight will happen.

This is the place to welcome the arrival in the opposition of notable personalities such as Jean Ping and Jacques Adiahenot. Here I want to tell them all the support of the Union Nationale and assure them of our willingness to open ourselves to all energies and intelligences to build this great gathering which alone can lead us to change. Despite the campaign of abuse, calumny and vilification to which they are subjected by the regime and its hired gun, I encourage them not to give in and tell them, if need be, that the methods used against them are those of the weak. Yes, insults, slander and defamation are the weapon of the weak! And this is because the established regime feels shaken to its foundations that it is afraid and revels in lowering the democratic debate.

The relevant proposals that have been made will constitute the roadmap of our Party in the coming weeks and months. We consider these recommendations and proposals as a mandate given to the National Bureau for future stages. In the coming days, we will meet to take all initiatives and decisions for their implementation.

The National Bureau will be meeting our compatriots across the country to reaffirm our determination in the struggle for democratic change in Gabon.

For 38 months, this regime has arbitrarily withheld the salaries of ten official members of the Union Nationale for the sole reason that they have expressed outside their work, their political views.

These civil servants were never brought to justice. They have never been brought to the Disciplinary Board. For over two years, these officials have called upon the Council of State to denounce the clear abuse of power that the regime is guilty of and that request has remained unanswered to this day. This is unacceptable. We take for witness the national and international public opinion on these violations of the fundamental rights of citizens.

The political struggle, our fight for our country is a personal responsibility and also collective which must challenge each and every Gabonese citizen. We ask that this situation of proven injustice be corrected quickly.

The situation in the country every day becomes more and more critical. The established regime is increasingly helpless, overwhelmed by events, divided. Its incompetence and amateurism are no longer a secret to anyone. And the Gabonese all social classes can no longer take of this carefree, reckless regime.

Communication, as ostentatious as it can be, cannot serve as economic and social policy for a country. For several weeks, the brutality of this regime, the amateurism of the women and men who have fraudulently installed themselves at the head of our country and that we have repeatedly denounced since 2009, have been joined by populism.

As always, the regime is trying to pit the Gabonese people against each other. Yesterday it was the provinces and ethnic groups that they tried to oppose. Today, it is categories of civil servants that are being presented as being responsible for poverty in Gabon. We strongly denounce this populist drift of the regime and note with sadness that the Government and Parliament are going along with servility with this drift.

This regime wants the Gabonese people to believe that it has just discovered, through a study carried out by a Consulting firm, that the Gabonese people live for many below the poverty line. But this fact is known to all, including the regime. As proof, the strategy document about growth and poverty reduction , produced by the Government and adopted by the Parliament of our country in 2005, had already reached the same conclusions.

Ladies and Gentlemen in power, it is no longer about discovering poverty in Gabon, it is about stopping it. But four years have passed and you have not done anything in that sense.

Poverty in Gabon is nothing other than the veil of smoke that the regime wants to put up in vain to conceal its failure. This is smokes screen and this must be said. This is populism and this is serious, irresponsible and dangerous. Instead of understanding that and acting accordingly, the regime is looking for scapegoats.

When a regime draws its country against its businesses, when a regime voluntarily pits its citizens against each others, it is called populism. And this populism must be exposed and denounced. And the Union Nationale strongly condemns this new form that the illegitimate power of Ali Bongo is taking.

At this stage, we no longer dare ask where are the 5000 housing units per year. We have understood that the Gabonese people will now have to mourn that lie of Emergence. But this is not by going from one lie to another that the regime would manage to deceive the Gabonese people, nor to conceal its failure. Had it ever had any ambition for Gabon, could you ask Me?

Yes, the social situation of Gabon, the precarious situation in which the Gabonese people are is an aberration, an incongruity. The Union Nationale has been saying this for four years, emphatically and every day that passes proves it right.

Gabon is your country. Gabon is our country. It is the one that life gave us and it is the only legacy we will leave to our children, our grandchildren and future generations. We must fight for our country and not accept that anything and anyone tries to reduce it into being the cash cow of a kleptocratic and monarchic regime.

Gabonese people, we must stand up against the unacceptable and save our country from the dangerous actions of this regime with its party the PDG. Let us Unite! Unite our efforts and talents to rid our country of this danger.

With that, I declare closed the days of reflection of the Union Nationale