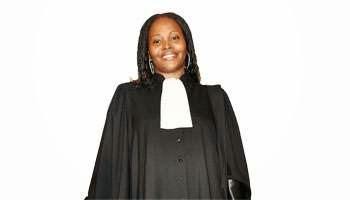 TRIBUNE OF CDDH-GABON
What can the GABONESE Opposition do?
(What I think)

It is first necessary to recognize that the situation in which we are stuck today is the result of a long process of degeneration of values and principles, a failing mentality cleverly planned by the political system that holds Gabon in Bondage since 1967. The period from 2009 until now is the culmination of this vicious system.

The year 1990, with its famous East wind and other speeches such as the one of La Baule, only brought to Gabon a relative multiparty system and nothing else.

The single-party system, which existed until 1990, was had at least objective in this regards: ideologically, voting meant nothing. Denial of democracy and fundamental freedoms was clearly established. Moreover, in the words of a famous song from the Centreville Entertainment Group: "We will no longer vote in Gabon because the vote is a setback to the progress and development...". This boggles the mind!

This kind of song was rehashed on radio in rural areas and on television in the cities, every day that God made. Every Thursday were devoted exclusively to animation groups. We drank the chalice to the dregs.

The so-called democratic opening of 1990 was what as the popular saying goes: “hell paved with good intentions“, in that it has installed a widespread hypocrisy. The people was made to believe that his voice was now going to count, while since 1990, on the 2555 days in a presidential term, politicians, the ones aspiring to the presidential chair and one who sits on it and who naturally does not want to give it up, only need the people for one day, the day of the presidential election, just to make up the numbers, because our politicians know how things really happen. During the other 2554 days, the Gabonese politicians do not need the people and will therefore turn their backs and think only of themselves, especially as they consider that the people got what it deserves, since it sells its vote against a bottle of beer, a salami sandwich, 2 or 3 rotten turkey wings, and for the luckiest, a 5000 francs bill.

The question that arises seriously is whether in these circumstances, our nation, that accepts to be treated in this way, could in his heart be shocked by the election results, by the consequences that may arise sooner or later because of its own complacency and passivity if not complicity.

Will something radically change in the thinking of our politicians whom the people have given the right to be despised by?

So far, our politicians, all sides taken together, only have one facet, one aspect of the overall decadence. Under their modern clothes, so to speak, lies an archaic psychology dominated by approximate judgments, interested only in what goes in the direction of their personal or partisan interests. They play with concepts without any link on the attitudes, irrelevant to our stage of social evolution. More than a quarter of a century after the advent of multiparty, no alternative to the system that manages the country since 1967 has been formed.

The Opposition in the political, modern and rational sense does not yet exist, it is to be created. And it is not because those in power are wrong, very wrong and utterly wrong that what counts as an opposition is right. If it says the truth in the "trial" of the regime, yet it does nothing tangible to prepare to replace that regime.

The future of Gabon goes through changing the system from top to bottom, but it will not happen without the sanitation of ideas about the foundation, organization and objectives clearly defined by the opposition.

Gabonese politics must be rethought. A politics that is not egocentric i.e. not centered on the leaders; nor allocentric, i.e. obsessively directed toward the power but one that is oriented toward the spirit of reforms, toward the people to teach them the militant engagement and toward the society to engage it in the production of civic ideas and the behavior of citizens. Then only the Gabonese nation could dream of one day winning against a Mameluke who would put his personal shortcomings, his dynasty or his servants above our heads.

In recent months, many political figures have launched laudable initiatives, which also seem to appeal to the population. It would be beneficial that these initiatives be accompanied by practical modalities. History tells us that popular reactions may be an illusion, and it would be foolish to confuse sympathy with deep support of the people, a real in print in the heart of the people, in order to establish ideological bastions. As an illustration, in the last presidential elections in Algeria in April 2014, meetings of the candidate Ali Benflis were full of people, yet he ended with a score of 12%. It is important to be aware of this now, at the risk of falling through and experience the same failures as in the past.

Our country is in danger. It is primarily threatened by the permanent disqualification of an irredentist regime which persists in exciting the causes of popular discontent by the mere fact of clinging to power for 47 years, a power that the people challenge it every day in many ways. But our country is also threatened by the antagonisms of the opposition and civil society, our divergent efforts, our mutual fears, our respective irrationalities, our regular confirmation of our lack of sense of community that is also shared by the people itself which does no longer have a collective frame.

A new Gabon must be built. To this end, the Gabonese opposition must first work to its unity, which is the only voice in the context of an election with one round, in a country like Gabon, with the technostructure as we know it and which is entirely devoted to the perpetuation of the political regime.

The Gabonese opposition must be able to understand that unity does not mean uniformity. This will enable it to solve the ego problems. For it is not because people get together to unite their forces to achieve a goal that they each lose their own substance.

Therefore, it is inappropriate for the opposition, for the moment, to talk about a candidacy, be it unique or not.

Once unity would be completed, the united Gabonese opposition should set specific goals such as the removal of the current system which should be a point of agreement for everybody.

That this occurs in the context of social peace must be the second point of agreement.

After the definition of objectives, the opposition must succeed in agreeing on a public speech, along with an economic program adapted to the urgent problems of the Gabonese people. Such an approach would be the sublime proof that it is able to ensure a peaceful transition to a democratic change. It then would cut the grass under the feet of those in power who have always used an approached akin to a "scorched earth policy" with its systematic use of indiscriminate and wanton violence, accompanied by lethal statements such as "if you try to get me out of power, there would look in vain for Gabon on the world map; if you are not with me, you are against me, etc."

The united Gabonese Opposition must then publish an educational document summarizing in a dozen points, the prominent proposals of its program which it would distribute when the time comes, for free to all the Gabonese population, and would translate it in all languages of Gabon.

The united Gabonese opposition must go to meet the actual real society within the country, in areas of non prosperity and in needy neighborhoods, sit on the ground and, if possible, eat-in banana leaves as the people it visits. No town or village as small as it might be should not be forgotten or overlooked. Macky Sall did it in Senegal. He took over a year to travel around the country. Visiting every nook and corner. Pitching his tent where he could live by himself the realities of deep Senegal.

The opposition only has meaning and impact by having its roots in society and its impact on the ground.

The presidential election will be held in a little less than two years, it is time for the opposition to put in place mechanisms to control all the devices of the electoral process.

To be limited to contest the results after the election without real influence on the effectiveness of the electoral process is an option without a future which even borders to naivety. There is a maxim of common sense that says "there is no impregnable fortresses, just citadels which are badly attacked."

Gabonese reality is that there is a real society and a virtual society. The virtual society, which is composed by the apparatus, the institutions and the people who compose it, is a moribund society.

The real society, all the “have-nots" and the vital forces who love Gabon, is a society that is full of energy. With tremendous resistance potential. But that real society lacks guidance. The future of this society depends primarily on the existence of a true elite and then the ability of that elite to commit to mobilize them effectively . Otherwise, this boundless energy could lead to a spontaneous reaction under the form of popular violence. And under these conditions, the mass demonstrations of people can cause something positive that would lead to the establishment of a democratic transition. We must not lose sight of the fact that the army will fire on the crowd as usual. But times have changed; very few political systems today can fire on their own populations, commit mass murder and crimes against humanity and retain power after such atrocities. And the Gabonese regime is not the Syrian regime.

The Gabonese opposition should take the opportunity to capitalize on the discontent of the real Gabonese society, be the voice and its effective representative.

This is the only way that will impress observers of all stripes and allow it to become a credible alternative.