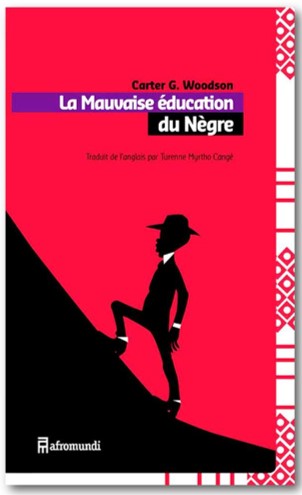 This book was written in 1933, by Carter Godwin Woodson, a Black American who received a doctorate from Harvard University.

Herein are recorded not opinions but the reflections of one who for forty years has participated in the education of the Black, brown, yellow and white races in both hemispheres and in tropical and temperate regions. Such experience, too, has been with students in all grades from the kindergarten to the university. The author, moreover, has traveled around the world to observe not only modern school systems in various countries but to study the special systems set up by private agencies and governments to educate the natives in their colonies and dependencies.

Some of these observations, too, have been checked against more recent studies on a later tour. Discussing herein the mistakes made in the education of the Negro, the writer frankly admits that he has committed some of these errors himself. In several chapters, moreover, he specifically points out wherein he himself has strayed from the path of wisdom. This book, then, is not intended as a broadside against any particular person or class, but it is given as a corrective for methods which have not produced satisfactory results.

The author does not support the once popular views that in matters of education Negroes are rightfully subjected to the will of others on the presumption that these poor people are not large taxpayers and must be content with charitable contributions to their uplift. The author takes the position that the consumer pays the tax, and as such every individual of the social order should be given unlimited opportunity make the most of himself. Such opportunity, too, should not be determined from without by forces set to direct the proscribed element in a way to redound solely to the good of others but should be determined by the make-up of the Negro himself and by what his environment requires of him.

This new program of uplift, the author contends, should not be decided upon by the trial and error method in the application of devices used in dealing with others in a different situation and at another epoch. Only by careful study of the Negro himself and the life which he is forced to lead can we arrive at the proper procedure in this crisis. The mere imparting of information is not education. Above all things, the effort must result in making a man think and do for himself just as the Jews have done in spite of universal persecution.

In thus estimating the results obtained from the so-called education of the Negro the author does not go to the census figures to show the progress of the race. It may be of no importance to the race to be able to boast today of many times as many "educated" members as it had in 1865. If they are of the wrong kind the increase in numbers will be a disadvantage rather than an advantage. The only question which concerns us here is whether these "educated" persons are actually equipped to face the ordeal before them or unconsciously contribute to their own undoing by perpetuating the regime of the oppressor.

Herein, however, lies no argument for the oft-heard contention that education for the white man should mean one thing and for the Negro a different thing. The element of race does not enter here. It is merely a matter of exercising common sense in approaching people through their environment in order to deal with conditions as they are rather than as you would like to see them or imagine that they are. There may be a difference in method of attack, but the principle remains the same.

"Highly educated" Negroes denounce persons who advocate for the Negro a sort of education different in some respects from that now given the white man. Negroes who have been so long inconvenienced and denied opportunities for development are naturally afraid of anything that sounds like discrimination. They are anxious to have everything the white man has even if it is harmful. The possibility of originality in the Negro, therefore, is discounted one hundred per cent to maintain a nominal equality. If the whites decide to take up Mormonism the Negroes must follow their lead. If the whites neglect such a study, then the Negroes must do likewise.

The author, however, does not have such an attitude. He considers the educational system as it has developed both in Europe and America an antiquated process which does not hit the mark even in the case of the needs of the white man himself. If the white man wants to hold on to it, let him do so; but the Negro, so far as he is able, should develop and carry out a program of his own.

The so-called modern education, with all its defects, however, does others so much more good than it does the Negro, because it has been worked out in conformity to the needs of those who have enslaved and oppressed weaker peoples. For example, the philosophy and ethics resulting from our educational system have justified slavery, peonage, segregation, and lynching. The oppressor has the right to exploit, to handicap, and to kill the oppressed. Negroes daily educated in the tenets of such a religion of the strong have accepted the status of the weak as divinely ordained, and during the last three generations of their nominal freedom they have done practically nothing to change it. Their pouting and resolutions indulged in by a few of the race have been of little avail.

No systematic effort toward change has been possible, for, taught the same economics, history, philosophy, literature and religion which have established the present code of morals, the Negro's mind has been brought under the control of his oppressor. The problem of holding the Negro down, therefore, is easily solved. When you control a man's thinking you do not have to worry about his actions. You do not have to tell him not to stand here or go yonder. He will find his "proper place" and will stay in it. You do not need to send him to the back door. He will go without being told. In fact, if there is no back door, he will cut one for his special benefit. His education makes it necessary

The same educational process which inspires and stimulates the oppressor with the thought that he is everything and has accomplished everything worthwhile, depresses and crushes at the same time the spark of genius in the Negro by making him feel that his race does not amount to much and never will measure up to the standards of other peoples. The Negro thus educated is a hopeless liability of the race.

The difficulty is that the "educated Negro" is compelled to live and move among his own people whom he has been taught to despise. As a rule, therefore, the "educated Negro" prefers to buy his food from a white grocer because he has been taught that the Negro is not clean. It does not matter how often a Negro washes his hands, then, he cannot clean them, and it does not matter how often a white man uses his hands he cannot soil them. The educated Negro, moreover, is disinclined to take part in Negro business, because he has been taught in economics that Negroes cannot operate in this particular sphere. The "educated Negro" gets less and less pleasure out of the Negro church, not on account of its primitiveness and increasing corruption, but because of his preference for the seats of "righteousness" controlled by his oppressor. This has been his education, and nothing else can be expected of him.

If the "educated Negro" could go off and be white he might be happy, but only a mulatto now and then can do this. The large majority of this class, then, must go through life denouncing white people because they are trying to run away from the Blacks and decrying the Blacks because they are not white.