Showing posts from September, 2016
Show all

English version
Jean-Marc Ayrault, the French Foreign minister, has just said on Europe 1 and on tiptoe, that his country would accept and recognize the re-election of Ali Bongo. Very well!
This recognition of Jean-Marc Ayrault has the benefit of clarity and proves that we are absolutely alone in this war against Ali Bongo. We cannot rely on anyone. The US ambassador had already set the tone, and France has just followed suit. As for us, we remain on our position, we keep on course. The objective remains the same and the great chanceries which now are openly supporting Ali Bongo, cease to be partners to consider, in our eyes.
For this blog, the lesson, the great lesson, the most important lesson is that if we want to win this war of attrition, where endurance is the most important determinant, WE MUST PROVIDE OURSELVES WITH AN INDEPENDENT MILITARY OPTION.
The headquarters of Jean Ping was bombed by Ali Bongo forces under French technical advice and included combat helicopters that pounded…
Post a Comment
Read more 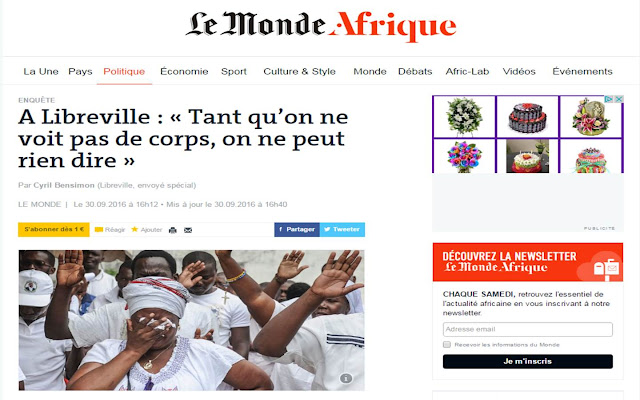 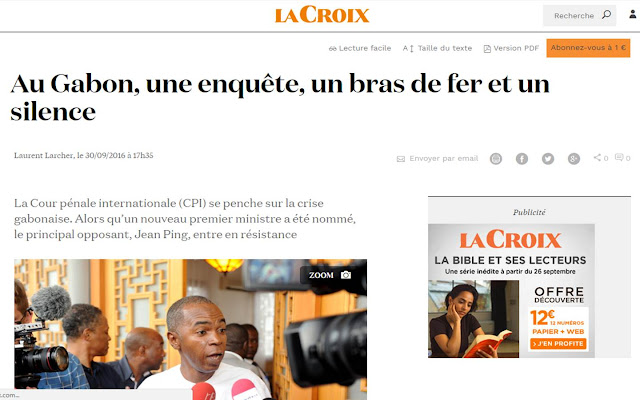 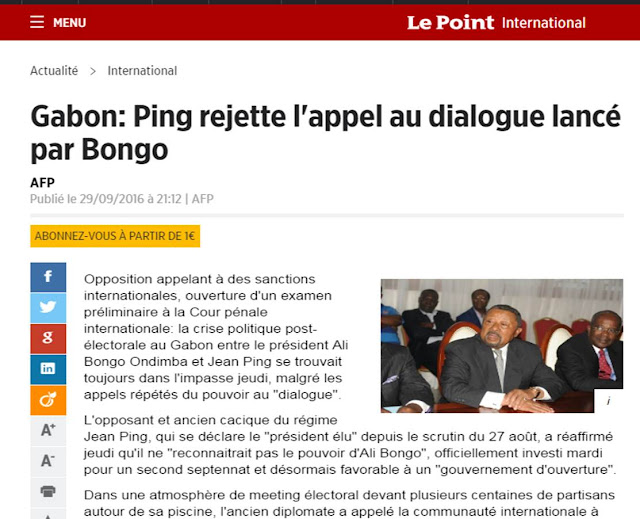 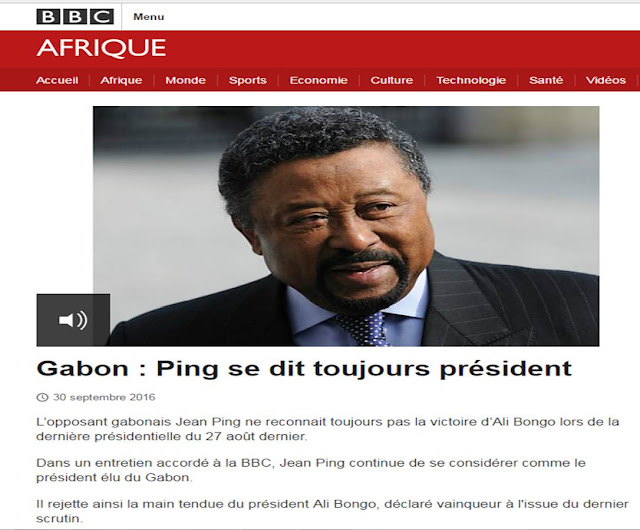 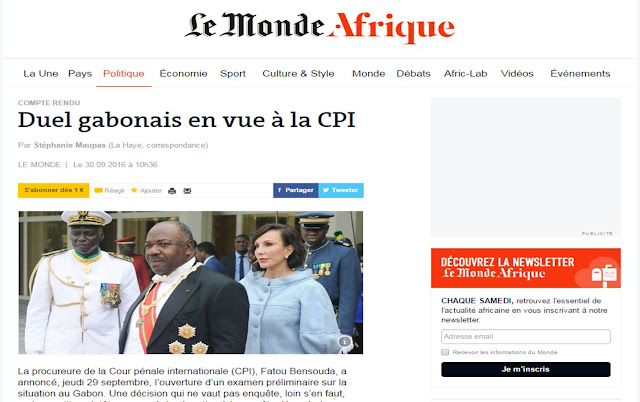 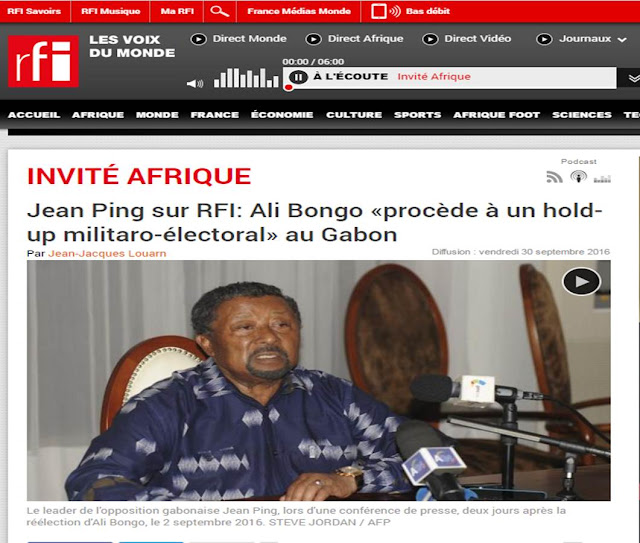 AN ARTICLE TO THE ATTENTION OF THOSE WHO WANT TO PANAFRICANIZE MEDIOCRITY! UN ARTICLE À L’ATTENTION DE CEUX QUI VEULENT PANAFRICANISER LA MÉDIOCRITÉ 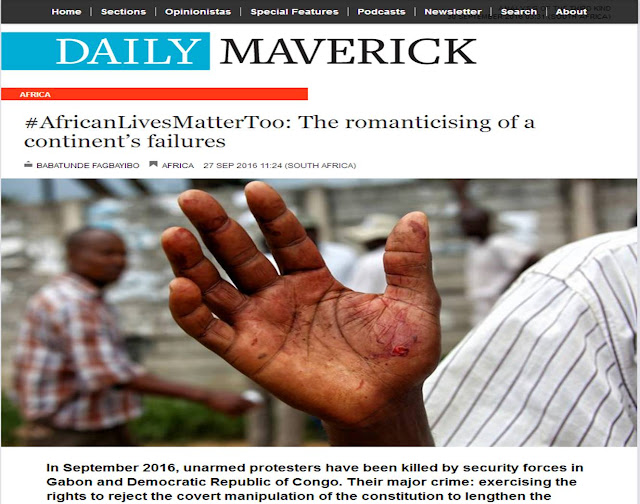 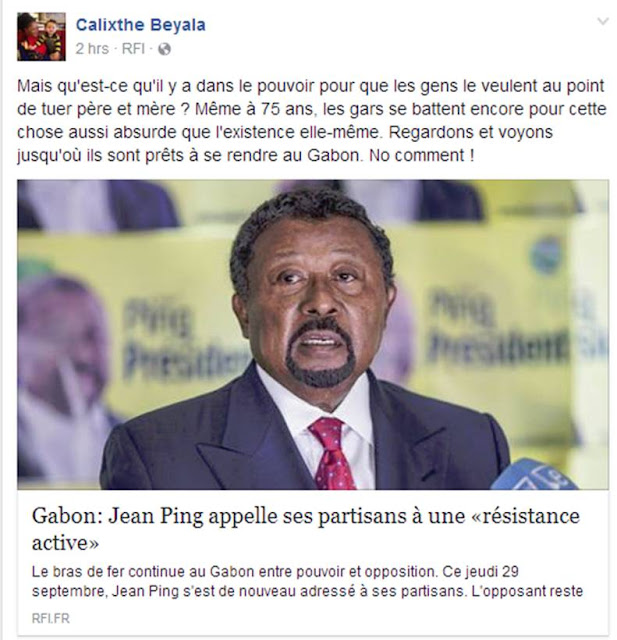 English version
They are tiring, the "would-be pan-Africans" living in France, sleeping with French people, but in the name of an almost fundamentalist cultural purity, condemn the people living in Africa to remain in the claws of lawless dictators.
Calixthe beyala is among those who refuse to the Gabonese people, the expression and respect of their votes; yet she, herself enjoys this suffrage and blithely uses it in her country of residence which is none other than France, the country she claims to "hate" the African politics, to get noticed; but from which she has never refused any honor to support this detestation.
But Mrs. Beyala, the Gabonese and Africans people who read this blog, and they are many, take note and tell you that they will obtain change with or without your approval.

JEAN PING HOLDS THE POPULAR LEGITIMACY AND HE INTENDS TO USE IT HEAR AND LEGITIMATE USE. JEAN PING DÉTIENT LA LÉGITIMITÉ POPULAIRE ET ENTENT L’UTILISER

English version
Jean Ping's speech this Thursday, 29 September 2016 can be described as being a political offensive intended to mark his territory, which is that of the popular legitimacy conferred by the Gabonese people, after the presidential election. On this point, there is no doubt!
Ali Bongo forgets one thing: he can brutalize the people, it can kill them; but he cannot obtain legitimacy by force. Legitimacy cannot be awarded by cheating and lying and that's why everything about Ali Bongo sounds false, seems forced and awkward. This is normal, as by not being legitimate, Ali Bongo has to lead by coercion.
On the opposite side of the spectrum, we see in Jean Ping, a spontaneity in his words and wishes, which is matched to the enthusiastic spontaneity of the masses and to the exaltation of the majority of Gabonese receiving his message. This is possible because Jean Ping has popular legitimacy.
The legitimacy is in politics, the opposite of coercion. When one is legitimate, he…
Post a Comment
Read more

ALI BONGO SAYS ON ALJAZEERA THAT THE GABONESE PEOPLE DID SATURATE INTERNET BECAUSE THEY HAVE TOO MANY MOBILE PHONES AND THAT IS WHAT HAS CAUSED THE INTERNET TO BE JAMMED. THIS GUY HAS NO RESTRAINT WHEN IT COMES TO LYING. ALI BONGO AFFIRME SUR ALJAZEERA QUE LES GABONAIS ONT SATURE INTERNET CAR ILS ONT TROP DE TELEPHONES PORTABLES ET C’EST-CE QUI A CAUSE LA COUPURE D’INTERNET. CE GARS N’A AUCUNE RETENUE DANS LE MENSONGE 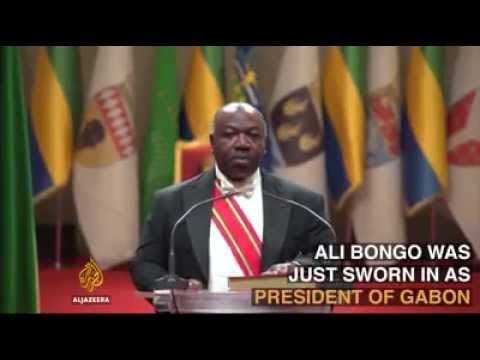 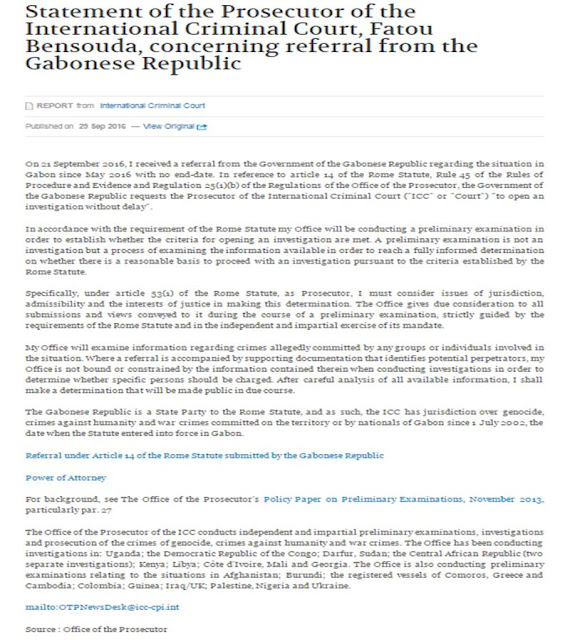 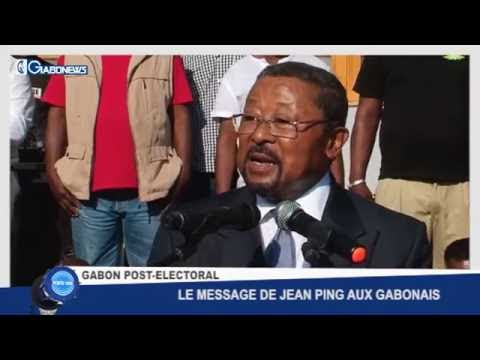 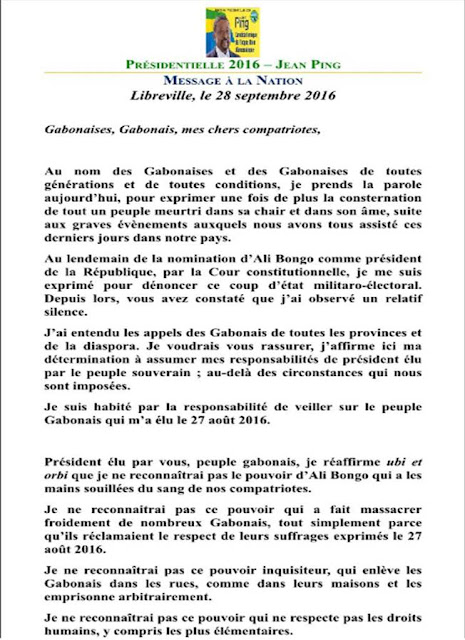 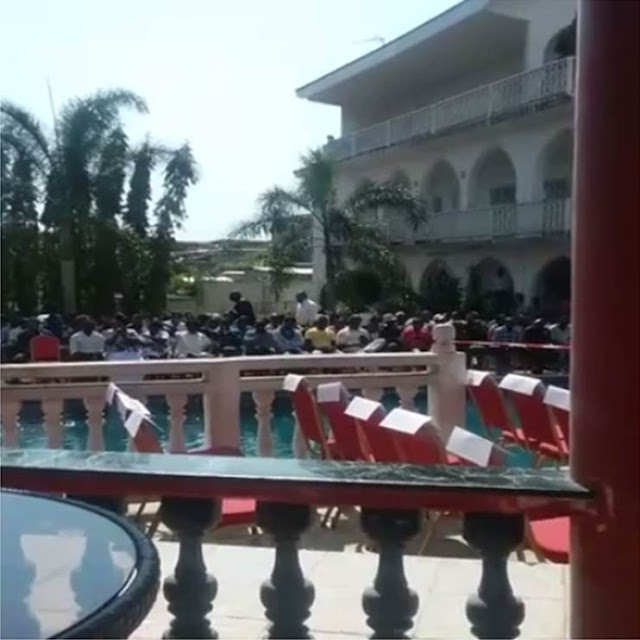 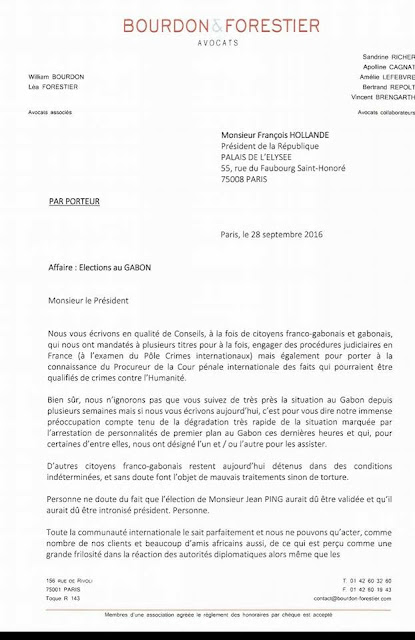 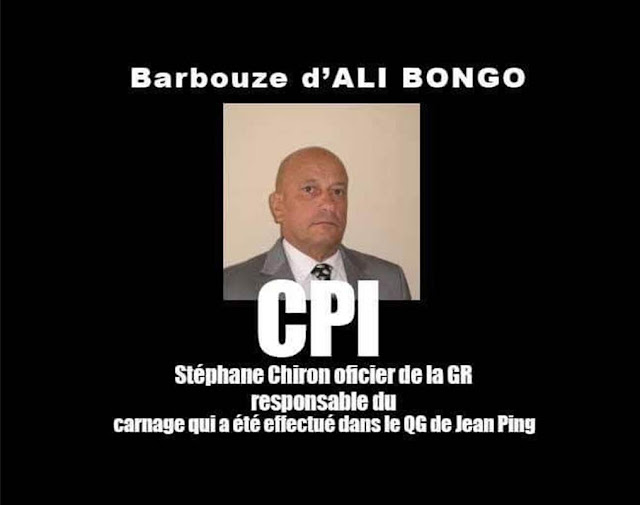 TO OUR DEAD! À NOS MORTS! 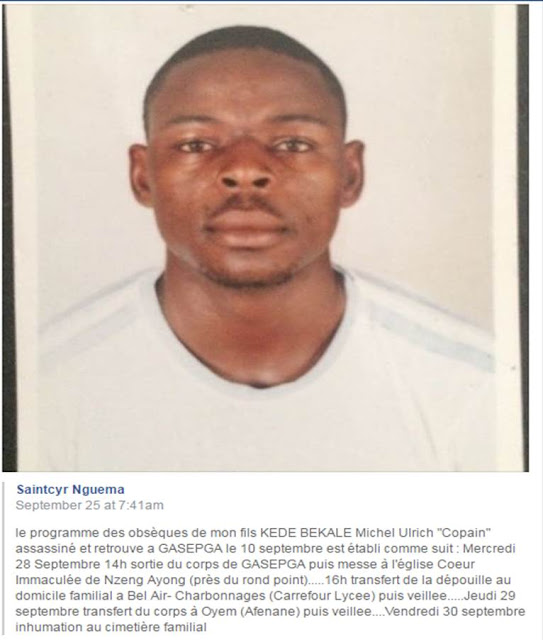 English version
You wanted freedom in your lifetime, Ali Bongo gave you death!
The free Gabonese people deeply mourn your untimely departure in the prime of life. You were simple people, like the masses, who only wanted the freedom of choice to determine your future and for that, those who own Gabon gave you death. You wanted the progress of Gabon and for that, Ali Bongo gave you death.
Very few Gabonese knew you. Most Gabonese people may know your name only after your passing; but you are and will always be an inspiration to us, for generations to come. You paid the ultimate price, giving your life so the country and the people you loved so much could be free. The example you set will guide many today and in the future.
Many of us are mourning your death and we are proud to salute you as great sons and daughters of Gabon. Our Country needs very many more men and women imbued with the spirit of self-sacrifice that you personified. Those of us who are still standing should take all measure…
Post a Comment
Read more 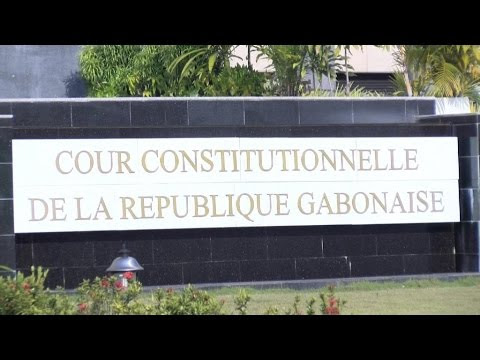 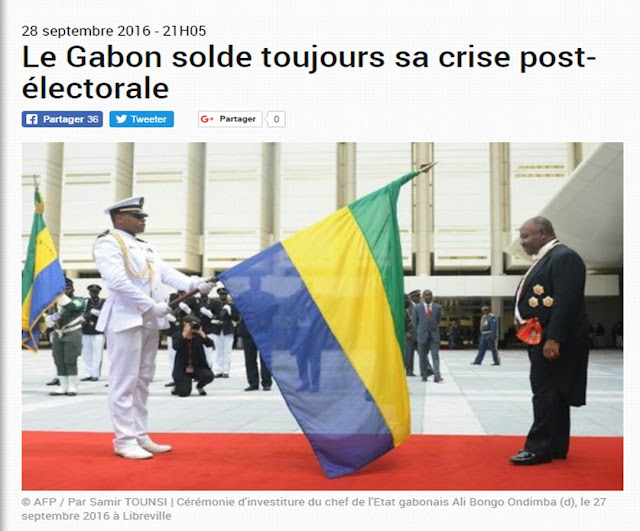 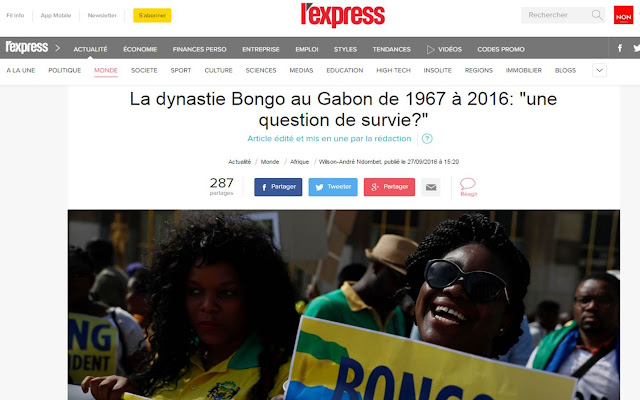 Saturday, 24 September, the Gabonese Constitutional Court validated the reelection of President Ali Bongo, son of the former Head of State Albert-Bernard Bongo. Together, they combine for nearly a half-century of leading the country. The historian and political scientist Wilson-André Ndombet gives a portrait of this dynasty.
One cannot understand the accession to power of the dynasty Bongo in Gabon, in 1967, without connecting it on the one hand with the history of institutional crises of the French colonial territory of Gabon before independence (1960), on the other hand with the role until his death of President Leon Mba in favor of Albert-Bernard Bongo.
Was he only an invention of the "command of the post-colony"? Deceased in 2009, after a reign of 41 years, did the future Omar Bongo Ondimba secure the terms of accession to power of hi…
1 comment
Read more 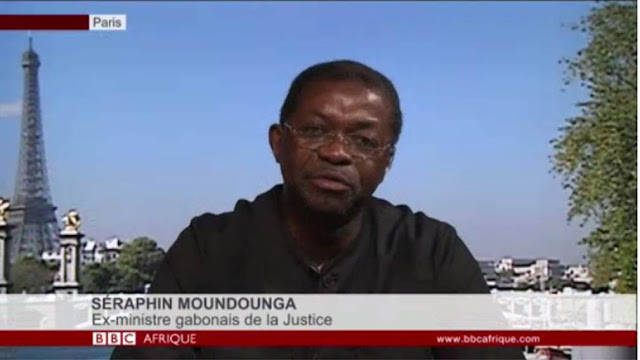 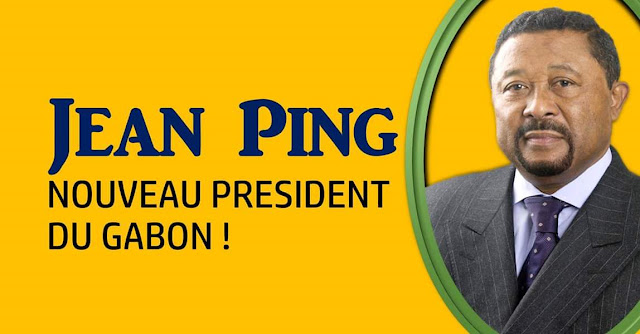 English version
Dear readers, a brief look into the political mirror of Gabon would remind us that in 1993, after the electoral coup of Omar Bongo, who had the tandem Mboumbou Miyakou, Marie Madeleine Mborantsuo, announce totally fabricated results, to steal the victory of Paul Mba Abessole, the latter and his followers were persecuted in Gabon and some were killed by Omar Bongo forces, under the indifferent gaze of the international community which hastened to recognize the election yet fraudulent of Omar Bongo. The scenario was repeated like clockwork until 2009.
André Mba Obame’s campaign took Gabon into a new political era, insofar as he led a campaign that completely undressed the regime in the eyes of the population. Everyone today agrees that the gap of competence was so apparent between André Mba Obame and Ali Bongo, that the result of the election was clear in the minds despite what Mborantsuo validated. But Ali Bongo had Sarkozy behind him, who used all of his influence to imp…
Post a Comment
Read more
More posts