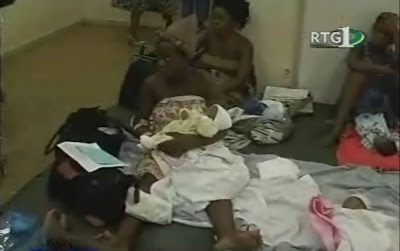 Last week, it was announced that the despot of Gabon, Ali Bongo, had pledged to donate two million dollars to UNESCO. Given the extreme poverty under which the Gabonese people find themselves, several members of the Gabonese civil society have drafted and sent a letter to Ms. Irina Bokova, the head of UNESCO, asking her and or organization to not accept this donation and return the money. This blog has translated the letter in English so it could be distributed to major news outlets around the word as an example how tin pot autocrats starve their countries and lavish western institutions that they court so they can gain some respectability. The letter is printed below.


OPEN LETTER of the Gabonese people

For the attention of Ms. Irina Bokova

Subject: Call of the People of Gabon to UNESCO to refuse a grant

The Gabonese people learned from the summary of the Gabonese government cabinet Ministers meeting of November 10, 2011, that Gabon will make an exceptional contribution of funds of up to two (2) million Americans dollars to UNESCO, in response to the call for funds that you have started following the suspension of the financial participation of the United States and Israel.

Normally, such a contribution to scientific and cultural efforts would not be a problem but, given the rampant poverty in our country today, the Gabonese people driven by the survival instinct, would rather appeal to your organization to reject the gift of 2 million dollars that the Gabonese government would like to offer.

Indeed, the Gabonese people would like to draw your attention to the alarming situation they find themselves in, since the accession to power, under very questionable circumstances, of Mr. Ali Bongo and would like to expose a number of elements that would justify their outrage if this gift was to be accepted by UNESCO. Accepting such a gift would reflect very poorly on the principles defended until now by your noble institution. Here are a few:

First, one might mention the illegality, at least in their form, of grants that have been given for nearly two years by the Gabonese government, using only decrees from the cabinet ministers’ meeting, without referring to the Gabonese parliament, which is a violation of the Finance Act of Gabon:

• January 2010: donation of 1 million dollars to the state of Haiti following the earthquake suffered by that country.

• March 2011: donation of 1.06 million dollars to the Japanese government, to help following the earthquake and tsunami.

• July 2011: donation of 2.5 million dollars to the population of in Somalia,

• November 2011: donation of 2 million dollars to UNESCO (for reasons discussed above).

However the local population is languishing in the most absolute poverty, this misery is compounded by the Ali Bongo regime, which for two years, has proceeded with wild expropriations, creating hundreds of homeless in Gabon.

These acts, which could express a spirit of international solidarity toward brotherly people, would have been well received if they operated within a legal framework and if they came from a country that was concerned about the living conditions of its people. In the present state, these gifts only serve the purpose of looking for international credibility by a regime in need of legitimacy.

The Gabonese government draws at will, funds from the state coffers without ever worrying about compliance procedures that should govern the management of public finance, trampling therefore the rules of good governance.

If UNESCO were to accept such funds, this would be equivalent to an encouragement by your noble institution, of poor governance practices that have become the norm of the current government of Gabon.

It is useful to remind you that more than half of the Gabonese people live on less than 2 USD/day in an oil producing country that is also rich in raw materials of all kinds. You will understand, Madam Director General, that the Gabonese people cannot understand nor tolerate, in such circumstances, that a government supposed to protect them and provide them with a better quality of life, would engage in political donations in all directions internationally, even though the social minimum is far from being accessible to most of the Gabonese people.

In this regard, it should be pointed to you that several international legislations protect in such circumstances, the rights of all people. Thus, among the purposes and principles assigned to the United Nations Charter, the obligation to "develop among nations, friendly relations based on the principle of equal rights of peoples and their right to self-determination and to take measures to strengthen universal peace" is high; similarly, the International Covenant on Economic, Social and Cultural Rights proclaims in its first article that: "for their own ends, all people should freely dispose of their wealth and natural resources, without prejudice to any obligations arising from international economic cooperation, based on the principle of mutual benefit, and international law. In no case should a people be deprived of its own means of subsistence." Finally, the noble institution in your charge is also intended "to contribute in building peace, in eradicating poverty, in promoting sustainable development and intercultural dialogue through education, science, culture, communication and information."

All of this demonstrates that the acceptance by UNESCO of the Gabon’s gift, while its people still live far below the poverty line, would be simply a rejection at the international level, of these principles championed by international law.

We cannot end our appeal without bringing to your attention the failure to respect human rights which the Gabonese government is guilty of. Indeed, only some time ago, several organizations of civil society in Africa and the west were indignant against your institution and showed their outrage regarding the international prize UNESCO-Obiang-Nguema for research in life sciences that was to be funded by the Obiang-Nguema foundation to the tune of 3 million USD. You did honor UNESCO in declining that offer. The Gabonese people are now surprised that your institution is willing to accept the gift from Gabon, while the current rulers of this country are not more respectful of human rights than are those of Equatorial-Guinea. On the contrary, in many areas such as infrastructure development, Equatorial-Guinea could give lessons to Gabon.

Many examples could be given to illustrate the corruption and deprivation of fundamental freedoms:

Several members of the private media, print and broadcast, are routinely imprisoned and their media outlets illegally suspended.

Several union leaders of National Education sector and other civil servants of that sector have seen their wages suspended for having exercised their civil rights.

Political parties have been dissolved (eg the National Union, the main opposition party in Gabon).

Many financial scandals have been exposed in recent years

We attach for your information, the report that was presented at the NGO Forum, held from October 18 to 24, 2011, in Banjul, Gambia, before the African Commission on Human Rights and Peoples' on the “State of democracy and human rights in Gabon."

Given all these evidence, UNESCO would betray its own principles by accepting this gift, because ultimately it is the Gabonese taxpayers' money that is used to make these donations while the people still live in poverty and are totally destitute. Therefore, the Gabonese people expect that you would refuse this gift as has been done and observed in the past, in the case of donations from the States that do not respect human rights and are guilty of corruption and maintain their people in institutionalized poverty. Maybe, if necessary, an investigation would certainly help you to see clearly before you decide on the acceptance of these funds.

In the absence of a consideration of our request, we reserve the right to appeal at the highest international level, to all the institutions to annul this gift. We are relying on your common sense and professional ethics, we sincerely hope that it would not be necessary to reach that point.


For the Gabonese civil society grouped within the movement "Ça Suffit Comme Ça":