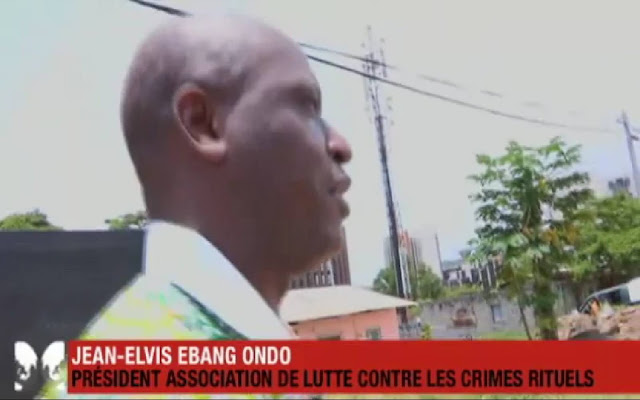 Declaration of John Elvis Ebang Ondo, President of the Association to Combat Ritual Crimes in Gabon

PRESS BRIEFING OF THE ALCR.

On behalf of all members and supporters of the Association to Fight against Ritual Crimes (ALCR) and NGO partners; it is with the blessing of the Lord Jesus Christ, the Almighty, that I return to speak to you after a period of silence. I would like to first thank the press, which responded overwhelmingly to our call for media coverage of this briefing and also to the NGOs and associations that are our partners.

Ladies and Gentlemen,
If I speak today, it is as a result of the latest developments in the national news regarding ritual crimes in our country. We must act because our struggle is taking a political turn that must be denounced.
Denounce the political twists that the phenomenon of ritual crime is taking.
We are here because we are determined to assert our status as citizens of this country that is going into the abyss: loss of values. We are here because we are thirsty for justice. We are here because we fear the Lord Jesus Christ, who is our support and we must praise him. We are here to tell the truth, the inconvenient truth. We are determined to fulfill our divine mission. (Ezekiel, chap. 22).
Since March 3, 2005, we parents and victims of this undignified phenomenon, suffer from having lost loved ones. We do not wish for this misfortune to happen to you. This is why we put in place the ALCR.
We conducted democratic actions: Peaceful marches, conferences and briefings, Masses and ecumenical worship in churches and mosques, interviews, assistance of pupils and students in their research, published books, done advocacy even documentary films etc... These actions, equally important, have just brought the country's political authorities to address this humanitarian issue.
Instead "to render unto Caesar what is Caesar's and unto God what is God's", we note with indignation the ease with which this issue is being addressed.
The ALCR receives phone calls quietly to deliver information on the work done about ritual crimes (statistics, and documentation). Can we ask a blind man to shoot a monkey perched on a tree? A single person to resolve conflicts of a couple? People who confuse crimes and accidents. We say NO!
Gabon is a country where cynicism is rewarded, where some decision makers are complacent about the progress of humanity, in the era of globalization. A country where good governance is neglected by the system. This is a disgrace for the Gabonese people!

No elected representative has dared to strongly lift the taboo on human sacrifice during the campaign. These tenants of the Leon Mba Palace have as in the past were neglected, trivialized the lives of citizens who are supposedly their constituents. They have categorically forgotten the bodies that are regularly collected behind their palace, and on the sea shores, on the rail road tracks of Owendo, in the small forest of Nzeng Ayong. What a diversion! To pass a law against ritual crimes would become a utopia in the days to come.
We will need this Messiah, this parliamentarian ready to lend its name to the fight against ritual crimes in all its forms! Certainly, his name will go down in history.
The ritual criminal are still enjoying impunity, and with their immunity, they are still acting in darkness, with greed, malice, pride and jealousy.
Since Monday, May 7, the criminal session is being held in Libreville, for the ALCR, it is not a special event because they are programmed sessions each year by the Court of Appeal. This is a distortion of thought of the Head of State during his speech to his cabinet. On the one hand, he speaks of ritual crime and not blood crimes as they say in the Council of Ministers, and secondly he especially wants to see all sponsors arrested and tried before the law "No one is above the law, "he concluded
We congratulate the President of the Court of Appeal in Libreville who has lead the discussion to the point that a perpetrator could publicly denounce the sponsor by name: the Senator from KOMO KANGO. We expect the remaining scheduled cases.
To denounce once again the resurgence of ritual crimes;
The ALCR has identified from January to May 2012: 10 children, 7 women and 15 men for a total of 32 people and sponsors are still free. The ALCR does not have the means to cover the nine provinces of Gabon; the number is a ballpark figure.
The Head of State, by meeting with the security forces and members of the Government of the Republic, on 10 April 2012, pledged to put an end to this scourge that tarnishes the image of Gabon. For once, we welcomed this good initiative by saying that we have not preached in the desert.
We are witnessing with regrets, the resistance to these recommendations. We have listed: a body in the Ogooue Ivindo, Mr. Denis Ango'o 42, killed on 1 May 2012, thrown into the river Ivindo after organ removals. Mr. Laurent. ZUE Allogho Mba found slained and beheaded in Bitam, Mr. Reverend Pastor of the Evangelical Church of Gabon Mr. Nze Ndong Beraud murdered in Lambaréné on May 5 and thrown into the water. The body was found on May 8, 2012, the list is not exhaustive. We are tired of seeing the bodies of people beheaded and thrown into the wild without the culprits being arrested and tried. For a sparsely populated country. What to do?
Mr. President of the Republic, as long as the Gabonese people would not see the three main players that make up the culprits arrested and tried in public, your message will have no effect. This chain consists of the Sponsor, the murderer and the witch doctor. Despite the rhetoric and promises to enforce the law, our families are still grieving.
Can we build a nation where the culture of death grows more and more? Meritocracy is excluded and replaced by the easy life? Can we build a country where more than 300 temples, lodges, cults and occult demonic practices replace libraries in the provinces? It is time to pray, and make Gabon a country of law, to free our nation from injustice. We are here today to deliver this message at the attention of these "so called powerful people" who kill the innocent for this world's riches.
After the Embassy of the United States of America, we thank the Catholic Church solemnly agreeing to partner with us since January 15, 2012 to liberate the country from this human butchery. We are ready to extend this circle to receive and work with anyone who has the fear of the Lord Jesus Christ. Together, let us break this evil culture "There's a time for everything, a time for every purpose under heaven. A time to kill, a time to heal, a time to weep, a time to laugh etc.. "Ecclesiastes 3.1 to 3. On behalf of universal love, these crimes no longer have a place in our country.

Ritual crimes: the right to life is a humanitarian priority.
We have broken the taboo; we have gone beyond the observations phase by denunciating. We now have concrete proposals after seven years of struggle to end these practices if and only if they are accepted and applied without rejection.
To give an answer to those who are panicking in the shadows and who solicit us: the real answers are in your hands. Stop distracting us, entertaining us.
What are ritual crimes?
Ritual crimes are defined as "practices, techniques or processes for intentionally, while the victim in living, remove some of their organs to draw strength hidden in them or the secrets of nature, of the cosmos; strengths that the instruments of modern science can neither measure nor identify and, which lead to empirical results, desired or provoked, such as acquisition of knowledge about the common course of things, or a power modifying them in a sense that they would not have had otherwise. "
Practitioners recover the vital organs of the victim, called "spare parts" (sex, language, eyes, ears, heart, and skin) for fetishes. The blood removed is drunk in the temples. These organs are supposed to offer: youth, health, wealth, success above all, honor and power. Everyone is a victim: black and white, small and big, believer and non-believer. A new crime born of Satanism rooted in political witchcraft.

When certain personalities talk about crimes only, or violent crimes, we say NO! Stop trivializing life. There are several kinds of crimes: political crimes, economic crimes, crimes of passion, and settling scores. Why the word ritual? During their ceremony, the followers are practicing and performing gestures, words or repetitive attitudes whose purpose is to direct a force toward a specific action. The qualifier ritual is well known and used by the United Nations. Specialization to fight against ritual crimes is important because: we are losing our values.

Stop entertaining people by your qualifiers: blood crimes, dead bodies, unidentified body, human sacrifice, etc... Have respect for human life, repent.
Ladies and Gentlemen,
With these remarks I will conclude my talk by asking once again to all to pray day and night because to cross the wilderness requires faith, perseverance and endurance. The struggle of the ALCR is to challenge the authorities to respect and uphold the commitments signed or ratified in terms of respect for human rights (the right to life). These violations retard the development of our young nation.

We are saying once more STOP TO RITUAL CRIMES!
Together let us unite our efforts, our energies to preserve the lives of our citizens who live in turmoil, and psychosis.
God bless and free our country from the forces of evil

Thank you for your kind attention.