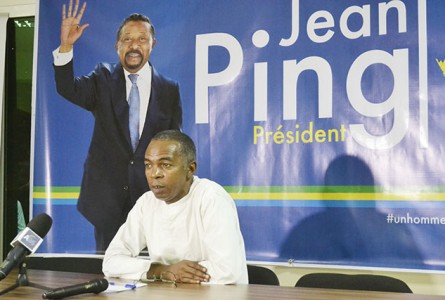 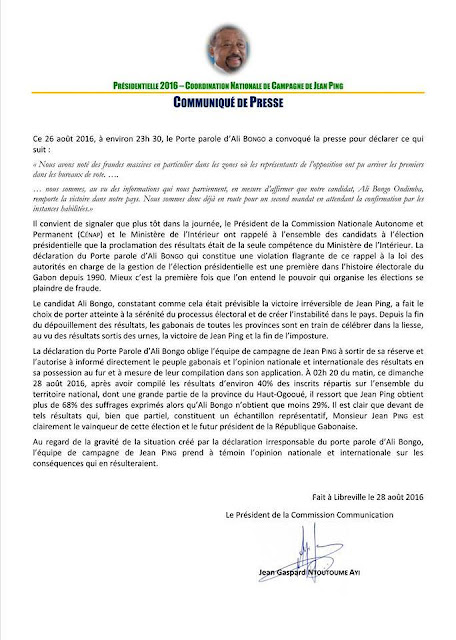 "We found massive fraud in particular in areas where the opposition representatives could arrive first at the polls. ....

... We are, given the information reaching us, able to say that our candidate, Ali Bongo, wins in our country. We are already on our way to a second term, pending confirmation by the relevant authorities."

It should be noted that earlier in the day, the President of the Independent National and Permanent Electoral Commission (Cenap) and the Ministry of the Interior, reminded all candidates in the presidential election that the proclamation of results was the jurisdiction of the Ministry of Interior only. The statement of Ali Bongo’ Spokesman, in flagrant violation of this reminder of the law by the authorities in charge of the management of the presidential election, is a first in the electoral history of Gabon since 1990. Better, it is the first time that we hear the regime that organizes the elections complaining of fraud.

The candidate Ali Bongo, seeing as it was predictable, the irreversible victory of Jean Ping, has chosen to undermine the serenity of the electoral process and create instability in the country. Since the end of the counting of results, the Gabonese all provinces are celebrating in jubilation, given the results that came out of the polls, the victory of Jean Ping and the end of imposture.

The statement by Ali Bongo’ Spokesperson forces Jean PING’s campaign team to come out of its reserve and compels it to directly inform the Gabonese people and the national and international opinion of the results in its possession as they are progressively being compiled. At 2:20 am, on Sunday, 28 Aug. 2016, after compiling the results of about 40% of voters distributed over the entire national territory, including much of the province of Haut-Ogooué, it appears that Jean Ping gets over 68% of the votes while Ali Bongo gets less than 29%. It is clear that before such results, although early, are a representative sample; Mr. Jean PING is clearly the winner of this election and the future President of the Gabonese Republic.

Given the gravity of the situation created by the irresponsible statement of Ali Bongo’ Spokesman, the Jean PING campaign team takes as witness the national and international opinion on the consequences that would result."

The president of the communication commission