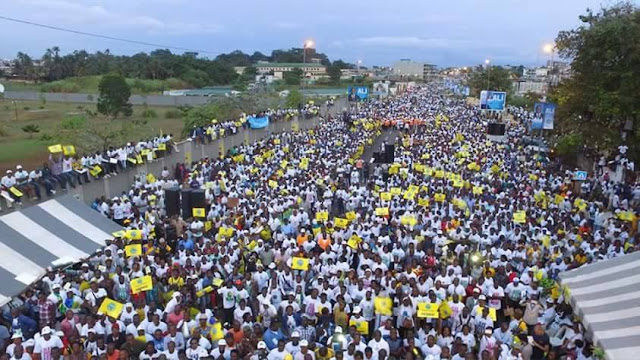 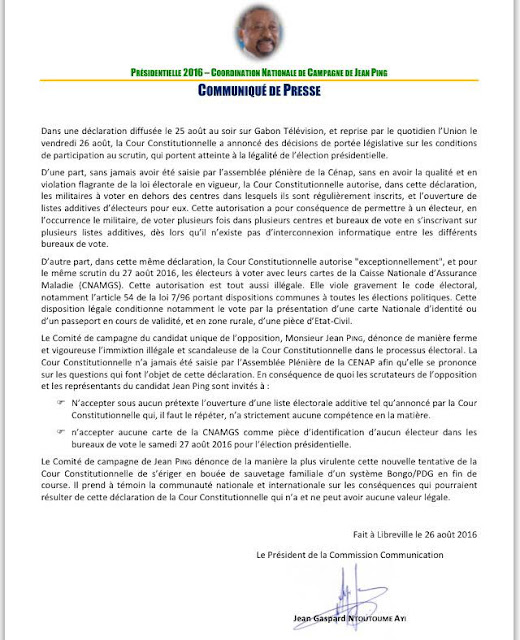 In a statement released on the evening of August 25th on Gabon Television, and restated by the daily L’Union on Friday, August 26th, the Constitutional Court announced decisions having legislative impact, on the conditions of participation to the poll, which undermine the legality of the presidential election.

On the one hand, without ever having been asked by the plenary assembly of the Cenap, without having the decision and in flagrant violation of the electoral law, the Constitutional Court has authorized, in that statement, the military personnel to vote outside the centers where they are regularly enrolled, and the opening of additive voter lists for them. This authorization has the effect of allowing a voter, i.e. the military, to vote several times in several centers and polling stations by registering on several additive lists, since there is no interconnection by computer between different polling stations.

On the other hand, in the same statement, the Constitutional Court allowed "exceptionally", and for the same election of 27 August 2016, voters to vote with their National Health Insurance Fund (CNAMGS) cards. This permission is also illegal. It seriously violates the Electoral Code, including Article 54 of the 7/96 Act on provisions common to all political elections. This legal provision conditions voting by the presentation of a National Identity card or a valid passport and in rural areas, of a document of civil status.

The campaign committee of the unique candidate of the opposition, Mr. Jean Ping, condemns firmly and vigorously the illegal and outrageous interference of the Constitutional Court in the electoral process. The Constitutional Court was never asked by the Plenary Assembly of the CENAP for a ruling on the questions which are the subject of this statement. As a result the tellers of the opposition and the representatives of candidate Jean Ping are asked to:

1. Not accept under any circumstances the opening of an additive electoral list as announced by the Constitutional Court which, it bears repeating, has absolutely no jurisdiction in the matter.

2. Not accept any CNAMGS card as identity document for any voter in the polling stations on Saturday, August 27, 2016 for the presidential election.

Jean PING’s Campaign Committee condemns in the most virulent manner this new attempt of the Constitutional Court to act as the family lifeline of the Bongo / PDG system whose end is near. It takes as witness the national and international community about the consequences that could result from this statement of the Constitutional Court that has and can have no legal value.

The President of the Communication Commission