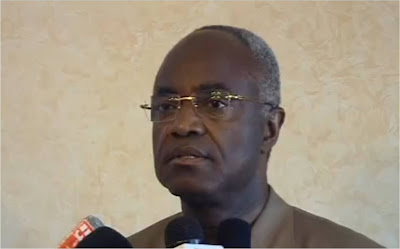 Former Prime Minister, Jean Eyeghe Ndong, who may be arguably the most genuinely popular dissident against Ali Bongo’s rule, delivered an address to the Gabonese people on the occasion of Independence Day on the 17 of august 2011. As usual, Jean Eyeghe-Ndong did not disappoint. He was factual, clear, concise, direct and most of all, called a spade a spade. The people of Gabon can always count on Jean Eyeghe-Ndong to speak the truth and this is what they expect from political figures. Below is Jean Eyeghe-Ndong’s statement.

Statement of Forces for Change by Jean Ndong Eyéghé

On august 17, the independence day of our nation, which is an important moment in the life of the nation, we should try to examined where we are and what could be done to improve the well being of the country and its people. But what do we see? In his address to the nation on August 16, on the occasion of Independence Day, Ali Bongo merely served the public with his propaganda which is usually only matched by his desire to legitimize the power he usurped on August 30, 2009. Ali Bongo has not met the legitimate expectations of the gabonese people. This statement is strictly speaking not a surprise because for two years, we have continued to denounce the amateurism of a regime that looks like a dictatorship.

Unfortunately, we see that Ali BONGO ONDIMBA remains true to himself, because his August 16 speech is far from the realities faced by the gabonese people. For example, for two years, the purchasing power of Gabon has not improved, or their access to health care. The Gabonese are still victims of untimely interruptions of water and electricity, better yet, society most vulnerable citizens face the acute shortage of clean drinking water.

The recently announced measures for students would have been good if they were part of a defined social policy of free education for all gabonese students. The 10% increase in the rate of scholarships to gabonese students outside the country and 25% for those students enrolled within the country look like they are made to get attention for the upcoming elections.

The housing problem remains for all Gabonese a figment of the imagination. It is not the promise of establishing a guarantee fund for housing that will reassure them.

The administrative reform would be meaningful only when it would be depoliticized and detribalized.

In addition, the “flying by sight” mode of governing used by the regime is a frantic search for legitimacy that leads Ali Bongo to want to capture a number of projects initiated and negotiated with external partners by President Omar Bongo Ondimba. This is the case of the widening of the highway National 1 until Ntoum, and other projects. The project of the National Health Insurance and Social Security, initiated and implemented by the last government of Omar Bongo Ondimba which resulted in the issuance of the first National Insurance card in December 2008 is another example.

Financially, the many pledges do not seem to take into account the debt capacity of Gabon. The public debt that had been reduced significantly during the last government of Omar Bongo Ondimba will, within two (02) years, be reaching levels so high that they would put Gabon in the category of countries at risk for foreign investors. The latest recommendations of the IMF are an obvious example of that risk.

Moreover, the gap between the budget passed by Parliament and the off-budget spending by the government serious damages the financial credibility of the country at the same time it undermines all social policies to make room for lavish spending such as:

Regarding the football African Cup of Nations, Ali Bongo for once coming clean, had to inform us that the omnisports stadium, that was supposed to be a venue for the cup, as stipulated in the promises made to the African confederation, would not be ready for this competition. Yet, the opposition had rightly questioned from the very beginning, the ability of our countries to meet the delivery times for that stadium. History has proven us right.

In due course, the Gabonese people who are football fans will need to know the actual cost of the competition, given the tendency of this regime for financial mismanagement.

In its time, the Honorable Zacharie Myboto denounced a political charade in the media organized at the Office of the President to, as they wanted us to believe, introduce personal data in the preparation of the electoral registry. Indeed, soon after, nothing happened because Ali Bongo relied on a deliberately truncated and false reading of the opinion of the Constitutional Court. To hear Ali Bongo on August 16, biometry will not be implemented for the next parliamentary elections.

An ordinance taken during the last Council of Ministers, which amends many provisions of the Electoral Code would only be justified as an immediate application in accordance with Article 52 of the Constitution. Indeed, the right to legislate by ordinance can only be explained by the urgency of the situation. The urgency here is to hold the next parliamentary elections in a transparent manner. However, the regime has decided otherwise. This is the place to denounce the democratic backsliding that this change of electoral rules is causing. Among other serious setbacks for democracy, this ordinance does the following:

- It challenges the tradition of political consensus which has always preceded any change in the electoral code;

- It overturns to the principle of parity in the process of decision making within the Cenap (the electoral commission);

- It opens the possibility of relocating the headquarters of the Electoral Commission at the whim of those in power;

- It confiscates the democratic debate by reducing the duration of the campaign, leaving the field open to corruption and the purchase of votes.

If for instance he had been brought to the head of the state by the will of the people of Gabon as he claims, can the current holder of supreme powers say that he is consistent with his conscience? Can he look the Gabonese people in the eyes and dares say that "I will continue the practice of responsibility, listening, dialogue and consensus that is constantly sought and is necessary for our progress as well as the preservation of peace that we know to be essentials"?

This is the case of these elections that the regime claims to want to hold by the end of the year without the necessary transparency tools demanded by the people of Gabon. If the regime was listening to the people, if it took into account the social demands however expressed, all the conditions could be met for the forthcoming parliamentary elections do not give rise to disputes and do not lead to a crisis. "No biometry, hello danger! "Ali Bongo said in the famous dialogue with the opposition that he himself had called. Today Ali Bongo has chosen danger, and he is leading the country there.

Are we a people condemned to permanent trial and error, even on what is accessible to us through simple understanding?

Ladies and gentlemen, my dear compatriots,

We are all aware of the seriousness of the situation in which this regime is trying to lead us, by insisting on organizing the upcoming parliamentary elections in disastrous conditions that we have just mentioned. We cannot and must not accept this.

Responsibly, we are calling on all political parties of the opposition, on the civil society and on all citizens who love peace, freedom and democracy. We invite them to take action in order to defeat the obscure maneuvers of Ali Bongo who has no other ambition than to remain in power by any means.

In the Gabonese people, we renew our call to action and vigilance.

Thank you very much