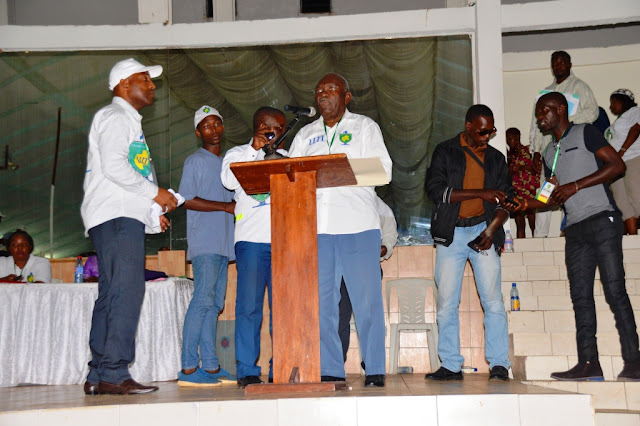 Dear Compatriots at the congress,

Here we are again in this place of "Noé Palace" for an extraordinary congress of our Party for the selection and nomination of the candidate for the investiture of the Union Nationale at the next presidential election, in application to the decision of the last ordinary congress held on 25, 26 and 27 March 2016, in this same place.

Yes, a little more than two months ago, the ordinary congress, due to the declaration of nomination of Mr. Ali Bongo Ondimba in the next presidential election, a contested candidacy due to the non-clarification of his administrative status, as to his paternal and maternal parentage presented in documents recognized as false by himself, the ordinary congress, I say, decided to prevent this candidacy that is improper according to the provisions of Article 10 of the Constitution, and to take whatever appropriate action for this purpose.

Maintaining the unconstitutional candidacy of Mr. Ali Bongo Ondimba being his only desire to organize a forced situation, a showdown with extremely serious and damaging consequences for our People, the Union Nationale which has worked and continues to work, unfortunately without success, for an inclusive national dialogue without taboos to be held, confirms its choice and its fight for the Removal, Transition and Election, abbreviated DTE (in French).

So the question arises whether the Union Nationale is not contradicting itself today, in making the designation of a candidate for the candidacy of the opposition Front for Change.

No, we reply, calmly.

Indeed, a period of explanation, awareness and clarification of the DTE was unavoidable and was necessary between the congresses. The Union Nationale did this internally and as part of the Sacred Union for the homeland (USP). Thus, after the fruitful exchanges of the last congress about it, every congress attendee has become a missionary of the DTE, of actions towards the International Community (UN special representative of the secretary general [UNOCA], western diplomatic missions, including those of the European Union and the United States of America) were undertaken, delegations have visited some localities, talks and visits were organized in neighborhoods, statements were made in different media, useful contacts were made with the declared opposition candidates to get them to join, meetings were held with Madam Ombudsman of the Republic and the delegation of the US National Institute for Democracy, and has a large meeting was held on 23 April. The action program adopted by the Union Nationale, complementary to that of the USP will continue unequivocally until the final goal is reached.

To date, what can we say as a summary? Without any boasting, we say that the subject of compliance with Article 10 of the constitution and of the DTE, dry initially, are more and more interesting our compatriots, who are more and more taking it as their own and are making a courageous commitment in the patriotic and citizen struggle we are lunching with determination to free Gabon from the tyranny of a man who, feeling his end, has become paranoid, whose only survival to retain power with his courtesans is to go after his opponents.

May I remind them, to himself and to his flatterers, that the storming of the Bastille, a state prison in France by rioters on 14 July 1789, became the symbol of the people's victory over the King's dictatorship!

May I remind them also that in the history of peoples, and this has just happened recently in Central Africa, those who use force always end up having to respond for that! The example of Habré is there to prove it.

One thing is certain, these diversion and intimidation measures do not diminish the will of the Gabonese people to end this reign, which is at the end of its rope.

The growing awareness of our compatriots for the DTE and their massive support of it, the result of the work done for two months, particularly by young people, members of political parties of the Front and USP, whom I congratulate and warmly thank at the same time, show that we are resolutely making a journey towards the Removal of Ali Bongo Ondimba.

Yes, the Gabonese People should know that compliance with the Constitution is not a political issue leading a citizen to make the choice between the Majority, the Opposition, or nothing. The respect for the Constitution is a duty, an obligation for all Gabonese citizens, and anyone else living in the country; because the Constitution is the fundamental law from which all other laws and regulatory acts are derived.

We know that very large sums of money have been made available to recruit thousands of people in anticipation of filing Ali Bongo Ondimba’s candidacy’s application at the CENAP. These are the first fruits of the push through with force operation being prepared, in violation of the Constitution. We strongly denounce these practices which are both backward and degrading.

To not respect the Constitution, Dear congress attendees, is equivalent to put Gabon into anarchy, in the law of the jungle, that is to say, the law of the strongest, with all imaginable and unimaginable disastrous consequences. This is why anyone, yes no one, can and must violate any of its provisions. With this in mind, the president and members of the Constitutional Court, responsible by their functions, have the obligation to respect and defend it, to take an oath, the left hand on the Constitution, before taking office.

From these elements, the provisions of Article 10 which define the conditions of eligibility for the presidency of the Republic must be strictly respected by all candidates, including Mr. Ali Bongo Ondimba who, since 2009, has been offering a hallucinating show about his birth certificate.

The illusion has lasted long enough, it must be put to an end. The immortal Gabon bequeathed by our ancestors calls on us all, as to compliance with the Constitution, because it is above us all. It invites each of us, to do their introspection before the very serious crisis situation our country has been under for seven years, and which threatens social peace.

The first person to whom this inquiry and this invitation is for, is Mr. Ali Bongo Ondimba, to whom Gabon has given everything, but who remains deaf to calls for the holding of an inclusive national dialogue. He must therefore return Gabon to the Gabonese people, in the proven state of mutual trust and peace it was at the death of President Omar Bongo Ondimba.

After all this work of explanation, teaching, advocacy and mobilization around the fight over the respect for Article 10 of the Constitution and the DTE, work we must continue unequivocally until its conclusion, with all other forces, more numerous today, the National Bureau of our Party, in compliance with the decision of the last congress, convened this extraordinary congress for the election and the seating of its candidate for the candidacy of the Front, to the next presidential election.

It is hard to imagine a process of this magnitude taking place without the participation of the Union Nationale, a political party that matters in the country. We need for our reputation and for our ambition to achieve change in Gabon, to have our standard bearer. Your mission today is to provide it to the Gabonese people who are waiting for this.

Nominations for this election are known. Each candidate will introduce themselves to you later. The elections are to be held democratically and in serenity, I wish good luck to each candidate.

The three candidates for the party's nomination

While greeting you, I welcome you to this extraordinary congress, which by its agenda, will be a milestone in the history of our Party.

I declare open the session of this extraordinary congress.