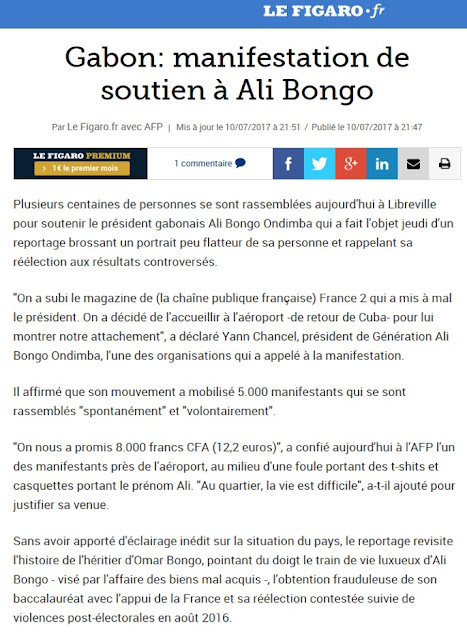 Several hundred people gathered today in Libreville to show support to the Gabonese President Ali Bongo Ondimba who was the subject of a report on Thursday unveiling an unflattering portrait of him and recalling his re-election with controversial results.

"We saw the France 2 magazine (France's public channel) which disparages the president. We have decided to welcome him at the airport - back from Cuba- to show him our attachment," said Yann Chancel, president of Generation Ali Bongo Ondimba, one of the organizations that called for the demonstration.

He said his organization did mobilize 5,000 demonstrators who gathered "spontaneously" and "voluntarily".

"We have been promised 8,000 CFA francs (12.2 euros)," told the AFP today, one of the demonstrators near the airport, in the midst of a crowd wearing t-shirts and caps bearing Ali’s name. "In the neighborhood, life is difficult," he added to justify his presence.

Without having given any new light on the situation of the country, the report revisits the history of Omar Bongo’s heir, pointing to the luxury lifestyle of Ali Bongo – in the crosshair for the case of ill-gotten gains - the fraudulent obtaining of his baccalauréat with the support of France and his contested re-election followed by post-election violence in August 2016.