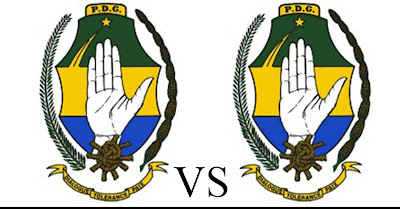 Following every one of our posts, there is usually a flurry of emails both praising and chastising us for what we may have exposed or written. It was the case again for our posts regarding Raymond Ndong-Sima being contradicted by Alain Claude Bilié Bi Nze and those of Raymond Ndong-Sima in Woleu-Ntem and the high voltage powerlines being installed above densely populated areas. What is new is that we have now received two very substantive emails by someone placing themselves at the hearth of the PDG, who is telling us that everything we and the Gabonese people are noticing is the result of an ongoing civil war within the regime. We have verified the identity and credentials of this person and we can tell you that this person is credible as a mid level functionary in the Gabonese administration and close to the secretary general of the PDG. However, we will respect our agreement with our interlocutor not to reveal his identity because, as you understand dear readers, he does not wish to be identified because of obvious repercussions.

1. Why did we choose to publish this person's remarks?

2. This is what our interlocutor told us

a. Members of the PDG see the same thing the other Gabonese are witnessing

"I have been reading you for some time. I do not always agree with you but I must be honest and say that at least you are consistent with your position and your analyses. What I want to tell you is that sometimes your reasoning seems as if you think that people who are members of the PDG or support Ali Bongo are heartless and insensitive to the plight of the Gabonese people. That is not true. When there is a power outage in Libreville or anywhere in the country, there is power outage for both PDG members and the rest of the Gabonese people. We suffer the same problems. The difference is that when we see a power outage we say that this is something the president has to correct, but you see that as a sign of incompetence by the president."

b. Ali Bongo has dreadful advisers

"Just like you do everyday, we have also noticed that the president sometimes makes baffling decisions. But for us, these are the results of the bad advice he receives from people who know very little about our country. As you are well aware, there are a lot of very influential advisers who are not Gabonese and these are the people who are telling the president to do things that seem crazy to all of us, like organizing a boat competition at a time when a lot of Gabonese families are looking for real improvement in their lives. But of course you are going to say that why is the president surrounding himself with these advisers and not better Gabonese ones? My theory is that the president's family was very hurt by the election in 2009 and they lost confidence in a lot of Gabonese people. We have discussed this openly within the PDG, we need to rebuild trust among the president and the Gabonese people. Because of the elections in 2009, when the president came to power, he surrounded himself with a lot of foreigners because he thought that he could trust them. But we are seeing what a mistake that was because these foreigners are not in Gabon to help the country, but they are here to make money. They are business men and not statesmen. All the shady businesses around the president, they are the ones responsible, because they only want money. A lot of us are asking for these foreigners to be dismissed from their high positions. We are waiting to see if the president will listen to us."

c. There is a war between 3 clans around Ali Bongo and this battle is very detrimental to the Prime Minister's authority

"You have remarked as we did that the Prime Minister, Raymond Ndong-Sima, who is a good and honest man, is having a lot of trouble being effective as leader of the government. It is because there are too many decision centers in this power structure. There are actually 3 powerful poles vying for supremacy around the president. First, there is the president's family and they control the security forces and the economic power. For the economic power, they have made BGFI bank, the quasi central bank of the country. We think this is a mistake but right now all state's transactions have to go trough BGFI bank. Second, there is the PDG which control the National Assembly and the Senate and has the internal political power; this is the clan of Gabonese people. Third, there is the clan of foreigners and they control all the projects. These people do not understand the needs of the country but they decide which project gets done and funded and which one does not. These 3 groups have all the power and there is nothing left for the Prime Minister who is like a puppet with really no power. For example, when Olam came to Gabon, no credible important Gabonese person was involved in evaluating the type of projects Olam was going to do in the country. It is only now that the populations of Woleu-Ntem are rebelling against the project, as you wrote yesterday, that they are asking Raymond Ndong-Sima to go bring calm to the population. This is a bad strategy because it makes the Prime Minister into somebody who is in favor of a bad project that gives land to foreigners. This weakens the Prime Minister. Another example is how they sent Raymond Ndong-Sima to go perform the ceremony after the death of the British boat pilot. At that point, the entire Gabonese population had a negative opinion about that competition, but the people who were responsible for this competition, the foreigners advising the president, did not take responsibility for this catastrophe, Raymond Ndong-Sima was seen as the person who was responsible, but the truth is that he did not even know that this competition was going to take place. He had nothing to do with it. Another case was when Raymond Ndong-Sima was trying to solve the student crises and he was able to meet with them and they had decided on a series of measures that were to be taken, then without warning, the security forces went inside the campus and arrested about 20 students. All the work the Prime Minister had done was wasted because these security forces do not take their orders from him. You see, the Prime Minister is the victim of the battle between these 3 clans. When they mess things up, it is the Prime Minister who has to come clean it up. This leads to the perception of the Prime Minister is very weak because even when he is negotiating with students, the security forces can undermine him."

d. We all recognize that there are problems in the country

"You and others in the opposition have said that the PDG was afraid to talk openly about what is going wrong in the country. I hope that you see that I am willing to discuss with you without any reservation. But if you ask me if we need a sovereign national conference, my answer to you would be: it depends. We need to know what this conference is going to accomplish. Talking is certainly better than not talking, and we must respect the opposition and the opposition must respect us. I respect you and I can honestly tell you that I agree with you that the country has several crises ongoing simultaneously. I think that we have an electricity and water crisis; too many compatriots do not have adequate access to electricity and water. Too many power outages. It is a crisis. We have a crisis in our hospitals because we don't have a lot of equipments and medicine. We have a crisis in our university as we have some students in jail right now. I can go on and on, but what is important is that we all recognize what is not going right in our country and I am not the only one. It does not help us to deny that there are crises when the people can see for themselves that their lives are not going well. I know that the spokesperson of the presidency said that there were no crisis in Gabon, but I think this again was an indication of the war between factions around the president. Some of them, especially the foreigners and the security people who want the president to give nothing to the opposition. But some of us are more realistic and recognize that certain adjustments have to be made. I don't know if you read L'Union today (the official newspaper in Gabon), there was an interview by Seraphin Ndao. He is saying in the newspaper L'Union that the country is in crisis. This is showing that many of us are willing to be honest and tell the truth, but others have their own interests. Some in the opposition think that the PDG does not want to help the population. This is not true, if it appears that the president is insensitive to the Gabonese people, it is because some people are giving him the wrong advice because they want to preserve their own interests. It is these people that we must throw out of the presidential palace."

Dear readers, these were the observations this individual made to us. Although we took issue with some of his position, we wanted to publish his remarks so you could see that some within the PDG are beginning to understand that something needs to change in Gabon, even if they want to negotiate the type of change, while others within the PDG are still acting as if their party can keep the Gabonese people muzzled forever. This battle between factions within the PDG and the regime seem to be getting serious as some of them are now wiling to express these differences out in the open. 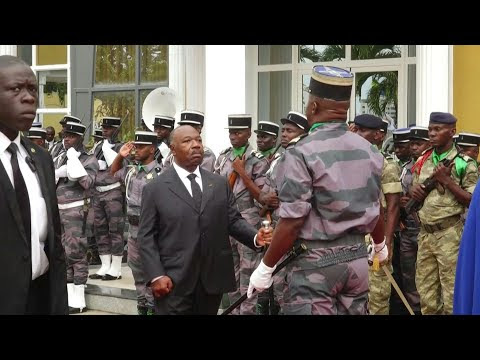